Before the underrated opponent, Fucsovics, Schwartzman suddenly lost 5 breaks in the first 2 sets and was 0-2 lead. The Argentine player played hard in the 3rd set and won after the tie-break series, but continued to lose 2 more breaks in the 4th set and lost the final 1-3.

The two sides had 13 break times of the opponent, of which 8 times belonged to Bautista-Agut. The difficulty that Koepfer caused for Bautista-Agut was not small, but the Spaniard still knew how to overcome difficulties at the right time to win 3-0 with the scores 7-5, 6-1, 7-6 (3).

Rublev needed 4 sets to beat Fognini 6-3, 5-7, 6-4, 6-2. The Russian tennis player created up to 13 aces and outperformed his opponent in the percentage of 1st and 2nd serve points, in addition to 5 breaks.

Andy Murray is having very remarkable performances in this year’s tournament. The former Wimbledon champion, although long past his peak, still shows a persistent and determined style in every ball. However, at the moment, not many people dare to expect Murray to do a miracle despite playing at home. The goal of the Scottish tennis player will be to get through each match, one opponent at a time. 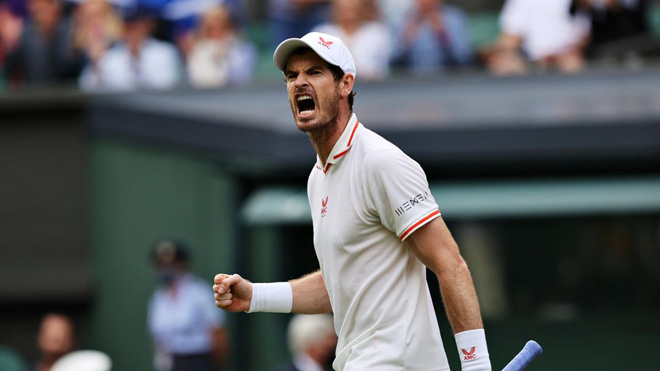 Murray is likely to have to stop in round 3

In round 3, the obstacle for Murray will be huge. His opponent is tennis player Denis Shapovalov, the 10th seed of the tournament. In terms of experience and level of playing on the pitch, Shapovalov cannot compare with Murray. But at this moment, the Canadian tennis player has great confidence and most importantly, his youth and abundant physical resources because he is only 22 years old.

The previous injury made Murray’s movement no longer as smooth and flexible as before. If he can play hard and force Murray to run many saves, Shapovalov will have a great chance to win. It is likely that this will be a tug-of-war and Shapovalov’s youth can be promoted.

After 2 rounds, No. 1 seed Djokovic did not have too many difficulties to overcome opponents. Looking at Nole’s bracket, it’s hard to find a worthy opponent to stop the Serbian player. The road to the final and winning the 6th Wimbledon title is very open, the problem is how Djokovic will play with what attitude.

In the third round, Denis Kudla will be the name that is expected to do something in front of the defending champion. However that is unlikely to happen. This is likely to continue to be another easy win for Djokovic. (Federer tennis live – Gasquet, Wimbledon second round, around 23:30, 1/7) Gasquet is Federer’s frequent defeat in the past….