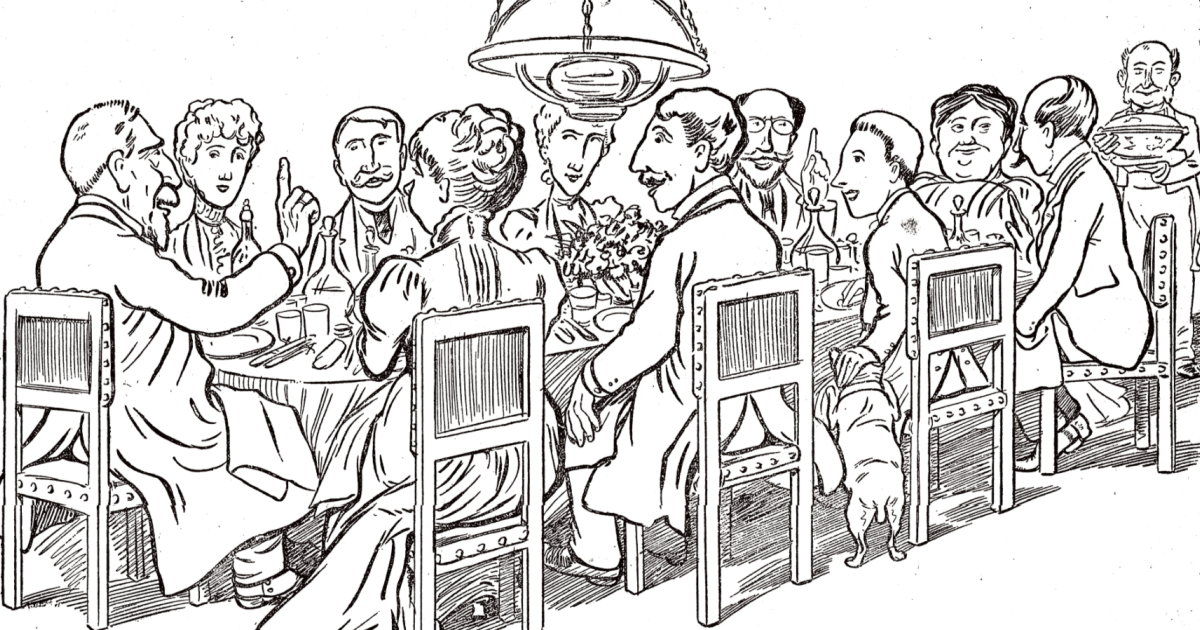 Dear French economists, a word of advice: don’t wake up with your colleagues. You would regret it.

Because, as you can imagine, you will inevitably talk about this hateful year, the Covid, the masks, the tests and the vaccines. And one subject leading to another, you will talk about closed restaurants, then loans guaranteed by the State, partial unemployment. And you will come across the issue of the debt, which reached 120% of GDP in France, while the Maastricht Treaty deemed it reasonable to stay below 60%.

From there, you will look at yourself like a faience dog. Which of you will shoot first?

Whoever has a few drinks in advance will say the words “Covid debt cancellation”, with the masochistic joy of the scorpion on the back of a frog in the middle of the river. And everything will go into a spin. You will experience a remake of “Family dinner” by Caran d’Ache (“They talked about it”), John Woo version.

“They talked about it! “

Based on quotes fished from your columns or your tweets from the last few days, here is, inevitably, how it will turn out.

“There is no magic money”

The wise one among you – or the one who claims to be such – will try to cut short the discussion.

“The cancellation is a pipe dream. Tomorrow, we will have to pay well. And who will pay? Not our generation, of course. We must therefore, in order not to sacrifice our children, organize an orderly recovery of our public finances. There is no magic money ”.

Then he will gently place his lips on a couch of foie gras.

“This cancellation is demagoguery, a sin against democracy. To govern is to choose, said Mendes ”.

The scorpion will use Burgundy again, and start the attack again:

“It is precisely to avoid the austerity purge that you visibly dream of that part of the debt must be canceled as quickly as possible”.

Obviously, he will elaborate, it will not be a question of robbing savers: it will suffice to cancel the debts held by central banks, which represent a quarter of the total stock. “It will be painless”, he will swear.

We find the sage trying once again to close the debate: “… in any case the treaty prohibits such a solution!” “.

While the scorpion, now mute and white, sinks into a sofa, a leftist academic will speak. “False, reread article 123 of the TFEU (Functioning Treaty of the European Union, editor’s note) ! Nothing technically prevents the central bank from canceling debts to its credit or even from distributing its currency directly. Moreover, the idea is progressing: the President of the European Parliament himself, David Sassoli, considers the cancellation as, I quote, an interesting working hypothesis ”.

” Obviously, an Italian! », We will hear a chuckle.

The leftist academic will defend the thesis according to which the States can go into debt quietly, because the European Central Bank is there to mop up behind. It creates money, buys securities on the market. We can then cancel them without damage in his balance sheet.

“Fake theory! Magicians! Barkers! “ Will growl, red with anger, an economist doubly appalled (he does not support the orthodoxy of the Orthodox, nor that of the heterodox).

The academic will summon him to explain himself. He will sputter without a mask: “You are doing the left a disservice with such bullshit, which unfortunately spreads in the media like pox on the lower Breton clergy”. We will hear a strange noise: Gwenaëlle, columnist at “La Croix”, will swallow her shrimp askew.

“What you are proposing would be a pseudo-cancellation, since it would not change the total State + Central Bank public debt. It’s a sleight of hand. You will withdraw from the assets what you will add to the liabilities of central banks! This is obvious to all people who have a minimum of knowledge in national accounts and macroeconomics! “

The sage will nod silently, satisfied.

Stung, the academic will laugh: “What a team! The carp and the rabbit! “.

Flattered to be compared to Plato, the wise man will continue:

“Our devastated is right. Ultimately, it is the central bank’s balance sheet that will bear the brunt of this cancellation. Its equity will become negative ”.

From the sofa, the scorpion will open one eye:

“Central banks can operate very well with negative equity. And they can create money ex-nihilo ”.

We will then be at the heart of the controversy: is the money created by central banks really “Created” ? For the double-devastated, this is never the case. Money is never “Debt free”because it always relies on credit. He will launch into an example (at this stage, putting back their masks and their coats, the non-economist guests will pretend baby sitters to be released):

“If your Central Bank creates 100 euros and injects it into the economy, production can increase by 200 euros, fine. What’s happening ? Let’s say that households spend half of it and save the other half. They entrust this other half to their banks, which immediately place them in their reserves at the Central Bank. We will therefore have a debt of 100 euros from the central bank to the commercial banks! So an increase in the State debt, taken in the broad sense, of 100 euros! “

Then the debate will begin to loop. The “Cancellers” accuse the sage of not going beyond his framework of thought. The academic will say:

“You have, for some obscure reason, a visceral fear of change, an almost religious attachment to debt repayment and merit! ”

Before falling asleep for good, the scorpion will mumble:

“She is right, you usurer, religion permeates your dirty speech, it is not by chance that you speak of” sin against democracy! ” Or “debt” in German, Schuld, also means “fault” ! “

The sage will take offense at these “Insults”. At the end of the table, a young American doctoral student, passing through France, having worked for Bernie Sanders, will test his French:

“Basically, don’t you fear that the citizens will appropriate monetary power from the ECB which, so far, only benefits banks? “

To which the sage will reply curtly:

“When you have your PhD, David, we can resume this discussion”.

There will be a great awkward silence. Everyone will leave each other cursing the year 2020.

Do you really want, dear economists, to experience such a New Year’s Eve? So stay with your family and forget your current passions. The debt level is undoubtedly too high, and a solution will have to be found in the long term. Faced with the markets, it is indeed useless to walk around with a target “120%” in the back. But there is no rush: the urgency is to avoid the social and political chaos to which this crisis can lead us. When the vaccine has cleaned up the air, when growth has returned on a lasting basis, then it will be time to find the most astute way, in consultation with the other European partners, to settle the debt issue.

Cancel the debt? The debate in eight articles