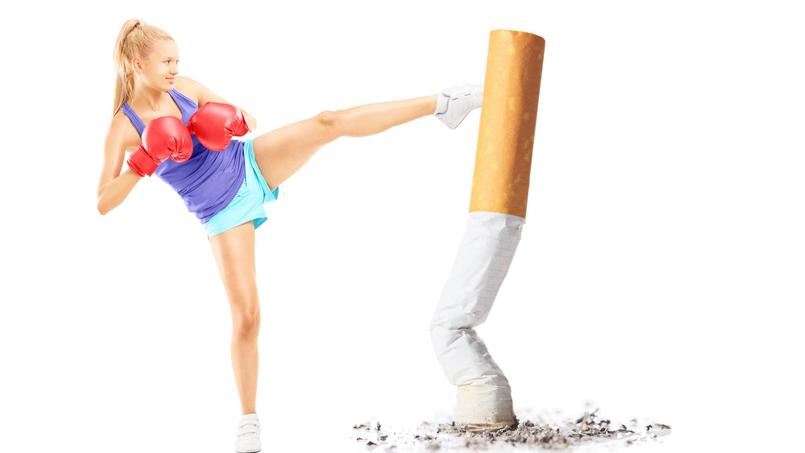 Not only does smoking take your breath away, it also makes physical activity dangerous. Training and performance have everything to gain from smoking cessation.

No, sport does not cleanse the lungs and physical activity in the great outdoors does not compensate for the effects of smoking. Smoking during, before or after exercise is even dangerous. Many athletes do not know it and many doctors do not claim it enough.

“Too few cardiologists are actively interested in smokers. This is also the case in pulmonology, oncology or diabetology, specialties which are nevertheless primarily concerned with tobacco, ”deplores Professor Daniel Thomas, cardiologist and spokesperson for the Société francophone de tabacologie (Paris). The Sports Cardiologists Club, in its 10 golden rules, places this warning at number 7: “I do not smoke, in any case never in the 2 hours preceding or following the practice of a sporting activity“.

For Professor Thomas, it should be put in the first place. And for good reason: not only are sports smokers exposed to the same risks as all other smokers (cancer, cardiovascular diseases, respiratory insufficiencies, etc.), but they also add complications related to their sport by disrupting the oxygen supply. to muscles, heart and lungs. The explanation lies in the 4000 or so harmful substances that make up cigarette smoke, starting with carbon monoxide (CO). Resulting from the combustion of tobacco, the latter binds 200 times more to hemoglobin than oxygen (O) which takes its place in the blood. It also binds to myoglobin, a muscle contraction protein.

“READ ALSO – Smoking increases again for a third of the French

The muscles and the heart undergo asphyxiation proportional to this oxygen deficit. The CO thus diverts the aerobic energy metabolism (whose fuel is oxygen) towards the anaerobic process, which produces lactic acid. The latter is quickly incompatible with the effort when the shortness of breath no longer allows to speak (ventilatory threshold). Endurance activities based on oxygen consumption (VO2 max) are the most affected. The lack of available oxygen forces the heart to increase its frequency to ensure the same blood supply. But this increase becomes ineffective when the heart no longer has time to fill, which further slows down activity. “Young athletes limited to effort by their smoking do not necessarily feel it. They only take the measure of this handicap once they are weaned, when they see their performance increase, ”notes Daniel Thomas.

Another enemy is nicotine, which stimulates specific cardiac and arterial receptors (like adrenaline does). “Each cigarette causes a decrease in the caliber of the arteries, an acceleration of the heart rate and an increase in blood pressure”, explains Professor Thomas. This effect is in addition to the natural adrenergic influences of exertion (increased cardiac output and blood pressure), which lowers sports results.

»READ ALSO – What are the effects of nicotine?

We run out of steam early, we capitulate faster, sometimes bordering on uneasiness. The risk is myocardial infarction by arterial spasm on narrowing of the arteries of the heart (coronary artery disease). These are more common in people over 50, and due to atheroma by excess cholesterol and inflammation related to fine particles of tobacco smoke. Even in the youngest, the risk is not zero: “It is not rare to see in smokers, even sportsmen, infarcts with coronary arteries without visible deformation on coronary examination”, warns the cardiologist.

Tobacco smoke also contains a large number of free radicals which attack the arterial walls. This oxidative stress promotes atheroma. The arterial surface becomes “rough”, can crack and cause the aggregation of blood platelets in clots (thrombosis), source of infarction. This cascade of events can occur at any time, particularly in cases of dehydration, which is common during sports practice. The cardiac risk then skyrockets during yet another “innocuous” cigarette, such as the one smoked after a football match with friends.

Another less well-known danger may be due to tobacco: that of insulin resistance in all cells, including muscles. “This pre-diabetes situation increases the risk of subsequent diabetes by 30%,” warns Daniel Thomas. However, diabetes is the sworn enemy of the arteries.

The more you smoke (tobacco, cannabis), the more CO there is fixed on the hemoglobin. It is measured indirectly in the exhaled air, from where it is eliminated in less than 24 hours if one does not smoke. This analysis is easy but the equipment costing between 200 and 300 € remains the tool of the only tobacco specialists. The concentration is displayed in “parts per million” or PPM. With healthy lungs, without air pollution, its accumulation in a non-smoker does not exceed 5 PPM. In a regular smoker, it often reaches 20-25 PPM. But this concentration is not proportional to the number of cigarettes: it is not a good indicator of cellular suffocation by carbon monoxide. “Its interest is to provide the smoker with a more meaningful translation of the effect of his cigarettes; in the same way that he will be sensitive to his cholesterol level and to his blood pressure level, ”concludes Professor Thomas.

For the European Society of Cardiology, smokers under 50 have a cardiovascular risk (disease and death) five times greater than that of non-smokers (excluding any passive smoking). His recommendations for the summer of 2021 are clear: weaning is beneficial, regardless of persistent overweight, which is the other known risk. It is better to use validated aids: nicotine substitution, drugs (varenicline, bupropion) or cognitive-behavioral therapies, on the advice of a tobacco specialist.

“Electronic cigarettes could be as or more effective than nicotine substitutes, according to current data. But we do not know anything about the long-term harmful effects of inhaled products (pulmonary and cardiovascular risk) ”, indicates Professor Thomas. According to the cardiologist, the electronic cigarette can, for some smokers, be interesting but only during the withdrawal period. Very important point, if an athlete uses vaping in withdrawal, he must be an exclusive vaper. Staying a consumer, even of a reduced number of cigarettes (vapo-smoker), does not reduce the cardiovascular risk during exercise.