If setting the target of 2nd place in the whole team of Vietnamese women’s volleyball is considered appropriate when Thailand is too strong and Indonesia is only a challenge, with Vietnam’s men’s volleyball, the goal of reaching the final is seems to be out of reach for the modest preparations and limited stature in the region.

In both women’s volleyball and men’s volleyball in Vietnam, the silver medal is a goal set to strive for. For women’s volleyball, this can be considered an appropriate “KPI”, based on the strength of the competitors competing in the SEA Games. Because according to Mr. Dao Xuan Chung, in charge of volleyball of the General Department of Physical Education and Sports, the Thai women’s team is at the level of Asia, even the world.

Vietnamese men’s volleyball is difficult to complete the goal of reaching the final.

Therefore, it is difficult for the Vietnamese women’s volleyball team to hope to make a surprise, despite having the advantage of playing at home. The opponent that women’s volleyball determines to compete with is Indonesia. This is a team that has improved in recent times. But the problem of funding once made Indonesia almost unable to attend the 31st SEA Games in Vietnam this time.

More than 2 years ago at the SEA Games in the Philippines, Indonesian women’s volleyball was also ambitious to change the color of the medal and aim for a silver medal with Vietnam. However, in the end, the Vietnamese girls still reached the final and continued to chorus to second in this competition.

Obviously, the Vietnamese women’s volleyball team is hovering between two high-class flows. Specifically, Vietnamese girls still create a large gap compared to the majority of Southeast Asia. But on the contrary, we have also been left behind by Thailand quite a distance in terms of qualifications. Therefore, the silver medal at the SEA Games at home is still something that cannot be different from the Vietnamese women’s volleyball team.

The current Vietnamese women’s volleyball problem that needs to be solved before thinking about confronting Indonesia at the next SEA Games is preparation and force. It is known that the captain of the volleyball team, Tran Thi Thanh Thuy, will only join the team on April 10, after she and PFU Blue Cats finished the season at the Japanese volleyball championship 5 days earlier. With only 1 month of training with the whole team, volleyball fans have reason to be anxious about this female athlete’s reintegration. Although, Thanh Thuy’s style, class and influence on the Vietnamese women’s volleyball team is not in dispute.

It should also be added that the women’s volleyball team has only joined forces at the Hanoi National Sports Training Center since the beginning of the year. The international friction is almost zero. Even the process of finding “green troops” in the country is very limited because over the past few months, Hanoi has fallen into the period with the largest number of COVID-19 infections in the country.

Men’s volleyball and difficult challenges from the final target

Contrary to Vietnamese women’s volleyball, men’s volleyball is considered not enough to reach the goal of reaching the final of the 31st SEA Games. A statistic shows that, the men’s team has only achieved the position twice exactly twice. Runner-up in previous SEA Games was 2007 and 2015. Even at SEA Games 30 in 2019 in the Philippines, the men’s volleyball team finished in 5th place overall. The team lost all 3 matches in the group stage. The most bitter of which was the 2-3 defeat against Cambodia.

Perhaps, also because they want to improve their performance, the men’s volleyball team decided to invite coach Li Huang Ning to return to train the athletes in June 2020. However, even with the appearance of an expert from China – a very strong country in volleyball, the hopes of reaching the final of the men’s team are still unrealistic.

Meanwhile, Thailand’s men’s volleyball is also determined to change the color of the medal when in 2021 continuously attend international tournaments on the continent and send the national U21 team to the world U21 tournament. In contrast, the Vietnamese men’s volleyball team last year only “practised vegetarian”, not to mention at the year-end gathering, from teachers to students on the team, they were all distracted because they wanted to join the host club as soon as possible. compete in the second round of the National Volleyball Championship 2021. From the above fact, we believe that VFV should consider reality to consider the possible and attainable goals for the national men’s volleyball team. participating in the 31st SEA Games. We should aim to compete with determination and solve each match in the group stage well, instead of setting too high a target.” 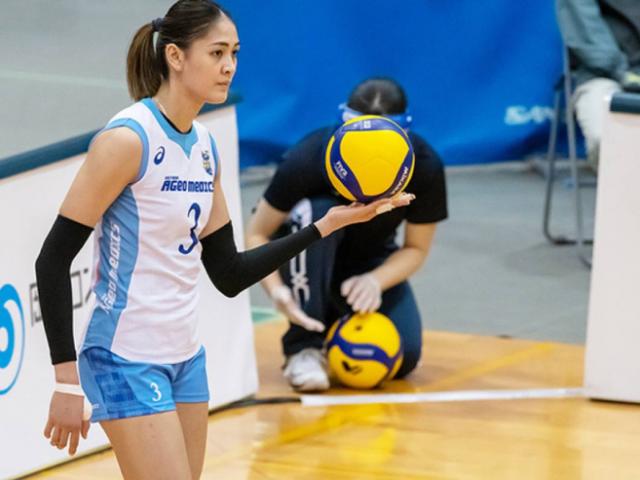 (Sports news, volleyball news) 2 feet long over 1m9 is the hope to help the Philippines compete for the women’s volleyball gold medal.