Huu Hieu competed overwhelmingly against Thai boxers, winning tickets to the semi-finals of the world tournament

In the quarter-final match of the women’s 45 kg weight class that took place on the afternoon of December 9, Huynh Ha Huu Hieu excellently defeated the Thai host country boxer Sirikhin Chaiyason after 3 rounds.

Huu Hieu excellently defeated his Thai opponent in the quarterfinals

Determined not to lose points, Huu Hieu rushed to attack with successive knee thrusts that forced the opponent into the corner, accompanied by extremely accurate kicks to the stomach. This helped Huu Hieu get to 4/5 referees to win in the first half.

In the second half, Chaiyason attacked a lot, but most of them were not effective against Huu Hieu’s good defense. Besides, the Vietnamese female boxer also counterattacked with very strong blows to the opponent’s face. Even at the end of the round, Huu Hieu even made his opponent fall to the floor after a powerful front kick.

In the last round, Huu Hieu’s powerful foot attacks continued to be effective, making the opponent unable to approach, helping her to completely control the game. In these 2 rounds, all 5 referees marked the victory for the female boxer of Vietnam. Huu Hieu received a hot reward after an impressive match

Winning overwhelmingly after 3 rounds, Huu Hieu entered the semi-finals, thereby definitely bringing home the world bronze medal for the Vietnamese Muay team. Of course, with Huu Hieu, her goal will be bigger when currently, she is the reigning world champion in this weight class.

With the advantage of long strides, Bang Thi Mai continuously launched powerful kicks into the opponent’s chest. Besides, the Vietnamese female boxer also has very good knee stabs in situations where the two boxers clash with each other. 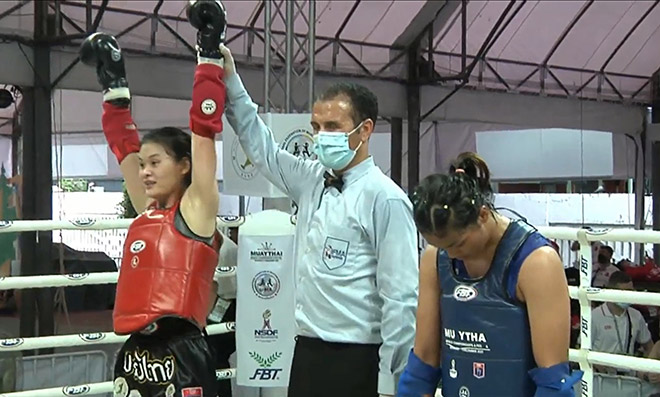 Thi Mai was even able to knock out April Joy La Madrid in the second half, but her opponent still survived after the referee’s counting. At the end of the competition, all 5 referees scored an absolute victory for Bang Thi Mai in all 3 rounds, helping her reach the semi-finals.

Not stopping there, in the quarterfinals of the women’s 54 kg weight class, Bui Hai Linh won a point against his Brazilian opponent – Stheffanie Lopes. Thus, on the day of competition on December 9, there were 3 Vietnamese female boxers who reached the semi-finals of the Muay World Championship and definitely brought home 3 more bronze medals.

Tomorrow, December 10, the tournament will take place the semi-finals. In addition to the three semi-finals of the female boxers above, the Vietnamese Muay team is also waiting for the brilliance of Le Hoang Duc in the semifinals of the 48 kg men’s weight class.