(Sports news, Olympic news) Besides the head of delegation Tran Duc Phan said that the Vietnamese Olympic team had difficulties in epidemic prevention, sports such as badminton and shooting received their own privileges.

According to information from officials of the Vietnamese Sports Delegation, as of noon on July 21, the Olympic organizers had recorded 75 positive cases of Covid-19 since June 29 until now. This not only raised the news that the 2021 Tokyo Olympics was in danger of being cancelled, but Vietnamese fans also expressed concern for the health and safety of the members of the national sports delegation.

Recently, the head of the Vietnamese Olympic delegation Tran Duc Phan shared about the difficulties in epidemic prevention for members of the delegation.

“In the past two days since the Vietnamese Olympic delegation arrived in Japan, we have always closely monitored and fully implemented the recommendations of the Organizing Committee. We always remind members to take 5K measures and consider epidemic prevention as the most important task right now.

However, it must be admitted that it is difficult for us to keep a safe distance for our coaches, or athletes, especially when traveling on the bus to the practice place, at the cafeteria, or it is difficult to avoid that the coaches, experts or athletes come into contact with other delegations during training and competition,” said Mr. Phan.

According to Head of Delegation Tran Duc Phan, the Olympic organizing committee has held up to 2 meetings for cold delegations of countries in the past few days with the content mainly related to the prevention of the epidemic, but little mention of the work. prepare and organize the competition of athletes.

Also related to the prevention of the Covid-19 epidemic at the Olympics, the Vietnamese sports delegation decided to use two cars provided by the organizers to prioritize transportation for coaches and athletes to the training venue. practice and compete, especially shooting and badminton. 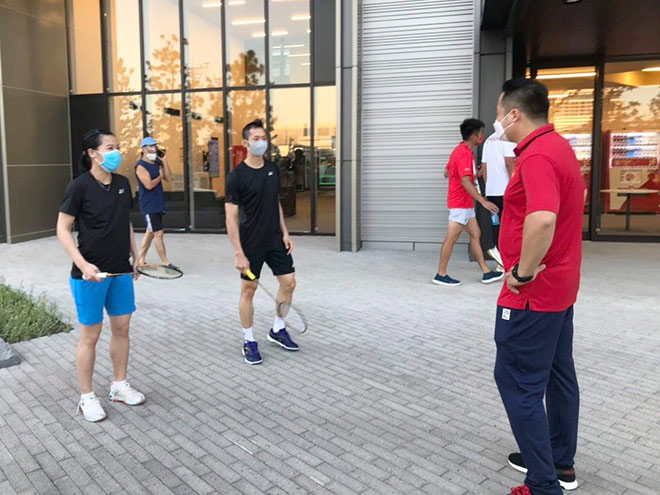 This will somewhat limit the contact of Vietnamese team members with other athletes on buses to transport athletes, especially during peak hours. Besides, according to regulations, each team leader, coach, expert and athlete must daily check for Covid-19.

Vietnamese athletes practice from 6am

On July 21, Vietnamese Olympic athletes continued to practice. In particular, the Rowing boat racing team with two players, Luong Thi Thao and Dinh Thi Hao, started the training session at 6 am. As noted, even though it was early in the morning, the weather in Rowing’s training area was quite sunny, with relatively strong waves and winds, due to the training terrain in the strait. In gymnastics, two athletes Dinh Phuong Thanh and Le Thanh Tung had a meeting with the equipment in the main competition area. In addition, teams such as boxing, weightlifting, archery also practiced in the morning of July 21. (Sports news, Olympic schedule) The latest update of the detailed schedule of athletes and competitions of the Vietnamese sports delegation…