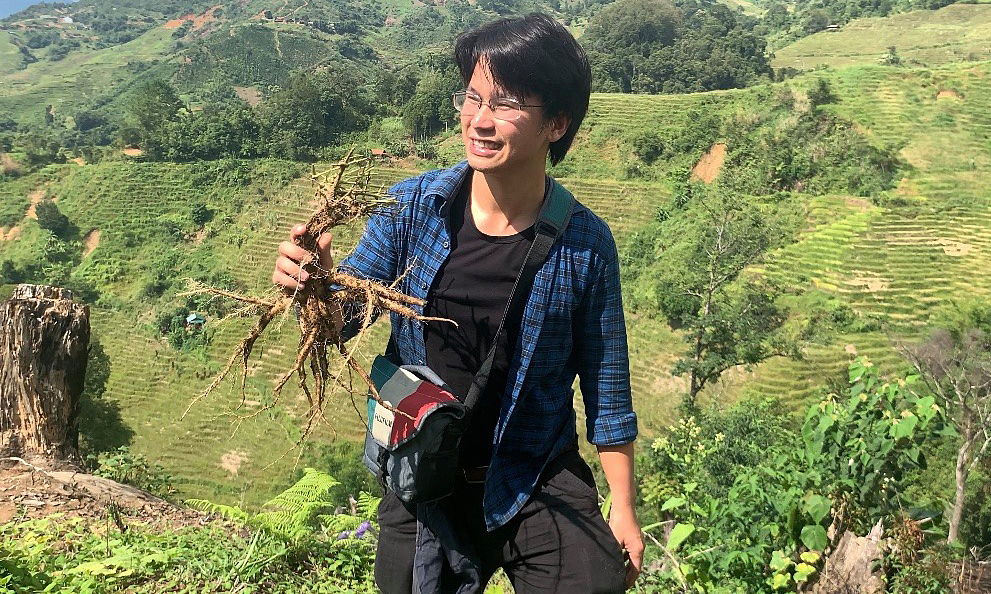 Kon TumWhen Tat Dat wanted to follow a business, not according to the family’s arrangement, his father made the condition that he had to survive in the forest to try to endure.

Before making this decision many times, Mr. Truong Quang Thieu and his wife, in Thanh Xuan (Hanoi), held a family meeting to question the youngest son Truong Tat Dat’s “bored with learning and craving business”. He and his wife are both soldiers, orienting their family to want their children to work in a stable state agency. On the contrary, Dat does not really know what he wants to do, but he is certain that he “does not want peace”.

While his wife protested, Mr. Thieu only analyzed the difficulties of going out to work. Dat still accepted. Finally, the father agreed to let his children go to Kon Tum to set up a career as incense (bamboo core in incense sticks), in a shack with machines available but not yet deployed.

“You have to live alone on a hill, cook firewood, use spring water, do not television, mobilize yourself”, the father of 42 years of military service, made conditions.

Of course Dat was happy. One day at the end of 2012, the 22-year-old man eagerly left. In the backpack outside of a few clothes, there are only books. Dat’s “tu chi set up” place is located on a hill in Dak Kroong, nearly 20 kilometers from the center of Dak Glei district, surrounded by Gie Trieng people.

In the first impression of Mrs. Pham Thi Man, 50 years old, a well-known business person in Dak Glei, Dat “honestly dumb”, everyone says everything. “People called Dat an industrial chicken. At first, I thought he could not do business, if he tried, he could only do production,” said Mrs. Man, who Dat considered as “master”.

There are three types of machines at the camp to make incense. Machine malfunctioned, he carried his own wrench, the wrench fixed, and manually connected the power line. The boy was left alone. Only when it rained heavily, the stream water was red and slimy, Dat did go down to the people’s house to ask for water.

By the third month, Dat started recruiting workers. A year later, the workshop was running smoothly. The young man continued to coordinate with Mrs. Man to open a mill of Litsea flour (a type of incense making material).

At that time, Mr. Thieu was working on a section of the construction of the Vietnam-Laos border patrol. Several weeks he visited his son again one night. The father thought “if the child can bear the situation he will give him the chosen path, but if not, he will definitely return to Hanoi”. But through the visits, he realized that his son “also has the gene for the soldier’s son”.

In 2014, Dat continued to cooperate in exploiting pine resin in Laos. At first, the work started to be bright but also full of hard work. In the rainy season, he often has to walk 10 km to remote villages, once every half a day to reach the workers’ shack.

The most haunted man once led workers to a beach in Dak Cheung district, Sekong province. Squeezing black limbs on the ground, smelling the smell of blood, they stood up. Eating in the forest for many years, but Dat has never seen so much. Nobody told anyone, the back of the bag of rice, bag of noodles and shrimp, and fish sauce was like a rush. Midway through the sunny hill, the group stopped. At the feet of someone, he has a few dozen …

The market has been operating well for more than two years, it starts to fluctuate, the price of flour has gone down, the goods sold but cannot recover capital. At the peak, the mid-2017 tornado blew the roof of the factory in Kon Tum, raining many goods. At the same time, business in Laos also failed, leaving several billion VND in debt.

“Things are rushing to test human stamina. But in that situation, the lessons learned from the time I was lying in the woods reading books and the close proximity of my acquaintances made me easy to accept. If you do business, there will be times when you lose, “Dat shared.

Worried about his poor future, Mr. Thieu was not able to sleep and eat. On a rainy night in July 2018, the father could not help it anymore, he asked: “What are you going to do?”. Looking at the stony father’s face, even now confused about himself, the son steadfastly said: “Give me three years”. Mr. Thieu quietly left. Do not dare to believe my words, but he has achieved what he wants, which is knowing that his son is fine.

As for Dat, behind the short statement is an ambition that has grown after six years of living here, being exposed to a lot of red ginseng. When using ginseng in Laos, he noticed a fishy smell and did not see any changes in his body, compared to the ginseng used previously in Ngoc Linh. The thought of “why does it make a difference, or I do not cook it correctly”, lingered in his mind for a long time.

The solution came once Dat visited the ginseng garden planted at an altitude of 1,550 meters in the Ngoc Linh range. The root ginseng grown here is sweet, yellow, with many branches, and is still very crispy for 2 days in the shade. Only a few tens of kilometers apart, but the sense of use and effectiveness of ginseng in Ngoc Linh is completely different from ginseng in Laos.

“Everyday, seeing Chinese traders go to remote villages to buy medicinal herbs, I feel more and more anxious that I am a young with long shoulder and wide shoulder, being exposed to modern technology, but cannot bring product. If it is good for our health to be used by our people, it will be a mistake, “he said.

After 2 months of thinking about or settling down with old businesses or committing himself, Dat once again chose the unstable side. He resigned his business in Laos, stopped producing Litsea powder, only focused on the bamboo toothpick factory which was still operating effectively. From the end of 2018, when night fell, Dat was buried his head in studying ginseng documents.

Initially Dat used the available tools to process red ginseng into different products for the family to try. Many days at 2 am, Mr. Thieu was awakened by his son, with his eyes closed, he immediately put a piece of ginseng in his mouth, asking: “How do you feel, has it been better than before?”. Once, Dat diligently chopped ginseng for 12 hours and fell asleep on the floor, woke up in pain, had to be bedridden for 5 days. “It was the worst illness in 8 years living here. It is the result of a long time lying cold and working long hours a position,” he said.

Entering 2019, the young man withdraws capital from the bamboo toothpick factory to buy a cold dryer, a technology that helps the red ginseng dry slowly, preserving the color and beneficial micronutrients. He spent 6 more months researching how to grind super-fine ginseng powder using a non-heated granite mortar. Then invest in many other machines to ensure a closed process.

In early 2020, Dat brought two products of Ginseng and honey ginseng powder to the test. How many successful transactions, holding in hand billions of money, but ever he felt like when waiting for results. There is very little to see material say in ginseng saponin (one of the main active ingredients to help make the miracle of ginseng). An acquaintance of Dat also used Lao ginseng to test without seeing this substance. “The result of my ginseng powder reached a saponin content of 1.92%, red ginseng honey is 1.87%. I am happy, what I hope was correct,” the boy recalls.

In May, Truong Tat Dat registered for trademark protection and started bringing products to the market. Up to now, he has a ginseng factory of more than 100 m2, with synchronous technology, creating jobs for 6 workers, beside the bamboo skewer workshop with 15 workers. Dat’s products use ginseng bought from Xo Dang people in Ngoc Linh and Muong Hoong communes (Dak Glei) grown on the Ngoc Linh range. The young boss is also cooperating with an employee in his company to plant 3 sao of raw material and is expanding to one hectare for practical use to study more carefully about ginseng grown in the Ngoc Linh range.

Dat’s office has a board that shows the fields to be pursued in the next 5 years and work to be done. Sam is just one branch in the map. Forming a chain of herbal and fruit drinks in the medicinal land of Kon Tum is Truong Tat Dat’s ambition.