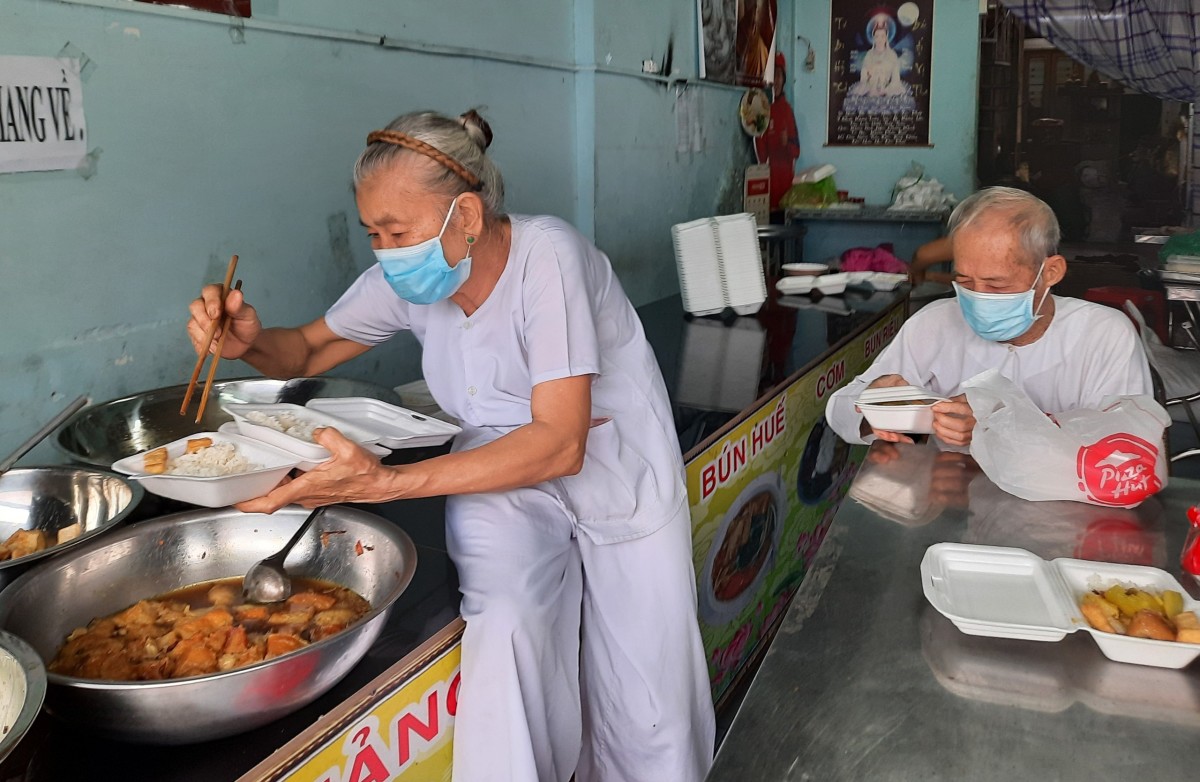 Ho Chi Minh CityFor a week now, more than 100 vegetarian lunch boxes a day of Mrs. Nguyen Thi My and her husband suddenly ran out at 10 am after being informed on social networks by someone.

Mrs. My quickly stirred and re-seasoned the pot of braised pumpkin. Meanwhile, her husband, Mr. Tran Van Hong, 86 years old, scooped hot rice from the large pot into boxes. The couple has been working hard since dawn to have more than 100 vegetarian meals at 9 o’clock. They put it in front of the house at 203 Nguyen Van Dau Street, Binh Thanh District for those who need to come by and pick it up.

This morning, Mr. Thanh, who works as a bottle keeper, showed up at the earliest. He was not in a hurry to get rice, but took out a small bottle of hand sanitizer and applied it evenly. After carefully putting the lunch box in the basket, Mr. Thanh said loudly inside the house to thank Mrs. My and Mrs. My wife and then ride the bike.

“Yesterday, I heard a few people said that this place has vegetarian rice, so I came to get it once, it was delicious, so now I’m back. Having been unemployed for a few months, having a free lunch like this helps me a lot,” said Mr. Thanh.

It wasn’t until 10 o’clock, the rice portions were gone. Mrs. My was happy to breathe a sigh of relief because she no longer had to wait until the afternoon like before.

My husband and wife are originally from O Mon district, Can Tho. Four years ago, my grandparents went to Saigon to treat back pain. In the city for a while, Mrs. My came up with the idea of ​​renting space to open a vegetarian restaurant to earn extra income so that she would not have to ask for money from her children. As soon as the disease was cured, the vegetarian restaurant of the grandparents also began to open. While selling, Mrs. My has helped the needy in her own way. Seeing poor people coming to eat, she took some money, sometimes giving it away for free

Knowing that she often helps people, many patrons bring food to donate. Grandparents use it to cook more rice and then put it in a box and bring it to the store to give it away for free.

Many days before I could prepare, someone came to ask, she invited them to the restaurant to eat like normal customers. An employee blurted out: “Early in the morning, the goods have not been opened yet, but they have met people who have come to ask”. Mrs. My advised: “Even if people ask, you still have to invite them properly to eat”.

In the days of social distancing, people limit going out, but grandparents still cook several dozen sets of rice to leave in front of the door because “for fear of anyone familiar with coming to get rice and not having rice, people will be guilty”. For many days in a row, the elderly couple had to sit until the afternoon, sometimes the rice soup was cold but still empty. Learning from experience, the next few days after lunch, Mrs. My asked acquaintances in the village to bring rice to give away in alleys with many poor laborers.

A few days ago, someone passed by and asked: “Why are you giving rice so much, out there I see many shippers without food because the shop is closed”. Hearing that, the old woman asked for help: “Please post it on Facebook so that those who need them can come and get it”.

“I don’t know how to use Facebook, but I know many people who have known about my vegetarian restaurant before and come to support me because of that,” explained Mrs. My.

After this story was shared a lot on social networks, in recent days, the free vegetarian meal of Mrs. My and her husband suddenly ran out early. Grandparents no longer have to wait for each person to come like before, the rice soup is not worried about getting cold.

On the morning of October 1, when city people were able to go out more easily, more than 100 servings of rice had been sold out since 9 am. It was even more surprising when many people brought rice, cooking oil, MSG and even a few packages of noodles to give to grandparents to help cook rice. A person who just knew that she often uses coal to cook to save money, so she actively changed the gas cylinder to save her hardship.

Lan Anh, 25 years old in Binh Thanh district, brought more than ten kilograms of rice to Mrs. My in the morning of October 1. “I’ve known her for a few years, but sometimes I only add a little, the family supports everything. It’s been more than three months since I came back, I’m glad that my grandparents are still healthy and still cooking for charity,” she said. .

Unable to trade for more than four months, Mrs. My was exempted from rent by the landlord. Thanks to that, even though she has no income, she still cooks rice for 0 dong. Many acquaintances called to offer to support their grandparents, but Mrs. My refused them all. “During the epidemic, it was difficult for everyone because they couldn’t do business, they couldn’t accept donations from people,” she explained.

The woman from Can Tho added that her grandparents were attached to Saigon because the community helped her in the early days of going to the hospital. They also enjoy the bustling life here.

“Many people ask me why when I’m old, I don’t ‘go back to the garden’ but work hard to earn money in the city to spend on extremes. Five children, each of them stopped, but I said: ‘Let your parents do the work, you will be healthy, sitting down. If I live in the countryside, I will go to the temple every day and live off of the money my children give me. If I can only earn money myself and then help anyone I want to help. If I just do the right thing, there will be many people working. I have nothing to worry about,” Mrs. My said.