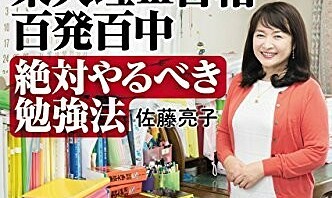 Just a housewife, but Ryoko Sato accompanied and brought his four children to the Faculty of Medicine at the University of Tokyo – a second most prestigious school in this country.

Ryoko Sato has published books and appeared in many TV shows to share her educational experience.

She said she graduated from a normal university. After graduating, she taught English in a high school for about two years, then quit her job soon after getting married. In the end, she became a full-time housewife. In order to raise her children successfully, she sets out five main rules.

Invest in your children to learn from before 3 years old

Ryoko Sato thinks that from 1-3 years old, children are always curious and able to absorb new things. Therefore, books, pictures and poems, simple rhymes with easy to read and remember phrases are very suitable for children. During this period, children may be exposed to new phrases in large quantities because they are easily ingrained in children’s memories. In addition, this method can also help children develop empathy, helping children better understand other people’s feelings. Through building early reading habits, children will form a habit of reading, which is essential for the future.

Ryoko Sato assesses that, through exposing children to story books or reading poetry to children, they develop a reading comprehension and perception ability. This means that when reading an article, images of the article content can appear in the child’s mind, from which they can express their feelings and thoughts about the article’s content.

This ability is not limited to just reading text, it will play a big role in how one understands the world, understands their surroundings, and unleashes his imagination. However, cultivating this ability is not “overnight” but takes a long time. So, the first thing to do is for your child to start making friends with picture books, rhymes with relatively easy sentences. Then, as they get older, they master basic writing skills, have the most basic awareness of human emotions, and then come into contact with more difficult forms as they mature.

There is a clear learning orientation

When the children were very young, Sato’s mother decided to let them follow the normal path of study, that is to be educated in a formal school, then take the college entrance exam. She judged herself that her children had no special aptitude for sports and the arts, so instead of forcing them to learn things they might not be good at, it would be better for them to focus on their studies and exams. College pass, aiming to have a bright future.

Sato said he never showed his husband the child’s report cards, because the father was a more strict and traditional person. When looking at your transcripts, if you see that your score is low, you may ask questions and blame, and this is absolutely not good for your child. Sato feared that her husband’s words would hurt the children’s self-esteem, so she never let her husband interfere with the children’s education.

To supervise children learn by themselves

Instead of letting children learn by themselves, Sato strictly supervises their children. She personally sets up her child’s schedule and urges her to learn. In addition, depending on the level of each child, she writes down the report cards and composes corresponding exercises. Sato checked his writing himself and found the mistake, then let him correct many times so he wouldn’t repeat it.

Sato’s views are controversial, because she forbids children from falling in love before entering college. Many parents believe that this prohibition is completely unreasonable. There are many opinions that it is not advisable to take away the time to make friends with children for the purpose of learning, because relationships are justified. Many parents also evaluate Sato’s method of imposing his will on their children, depriving them of their choice of choice, and at the same time exaggerating the mother’s personality.

Although Sato’s rules have helped her successfully raise her children, many people disagree. However, many Japanese mothers imitate Ryoko Sato and learn from her, in the hope that their children will also become successful. The mother herself says that her approach is always based on the fact that the children are happy and healthy, and that they are not forced.