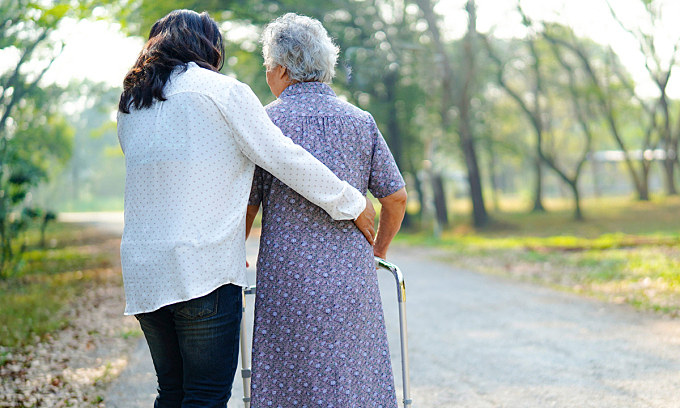 When Hong was changing her one-year-old daughter’s diaper, her biological mother, who had severe Alzheimer’s disease, sat on the floor, her pants soaked.

It was noon on a weekend last year, when the maid asked to return to her hometown to have an urgent job. At this time, her daughter is learning to walk while the 70-year-old mother has to walk with a cane. The 32-year-old woman struggled to help her mother from the bedroom to the bathroom, leaving her daughter to cry in the crib. Every time the weather changes, she goes to the toilet uncontrollably.

Currently, Hong is able to run around the house, and her mother’s legs are weak, almost lying in one place. Since the day her father died, she was the sole support of her mother. The family has two sisters, but the younger sister is married far away, life is difficult, almost nothing helps. For many reasons, Hong and his wife could not live with their birth mother. She spends her mother’s pension of more than seven million dong to hire a maid.

With an additional three million dong, Hong could register her mother for a place in a nursing home, but she and her husband could not bear it. When she was sober, she said “unfilial children let me in”.

“I’m most afraid when my mother and daughter are sick, I can’t split myself, so I run like a shuttle. When I’m with one person, I’m afraid the other will be in trouble,” she said.

Sociologists call people who have to take care of elderly parents and raise children like Hong as the “sandwich generation”.

“Sandwich Generation” (Sandwich Generation) is a term coined by American sociologist Dorothy Miller, referring to a group of middle-aged people (40-50 years old) who have to take care of their elderly parents and raise children at the same time. .

According to the American Center for Social Research Pew, as of 2013, nearly half of people aged 40-50 had parents over 65 years old and had children to take care of. 15% of middle-aged people say they are financially supporting both parents and children.

There are no statistics on the number of people “sandwich” in Vietnam, but according to Dr. Khuat Thu Hong, Director of Social Development Research, this is a common and inevitable situation. According to the 2019 Census, the proportion of the dependent population (under 15 years old and over 65 years old) in Vietnam accounts for about 45%. Meanwhile, the youth population (from 16 to 30 years old) in Vietnam is decreasing year by year, while the age group 60 and older is increasing.

“People’s life expectancy is increasing day by day, young people have fewer children, so when they have only one or two children, the burden of worries is more. Meanwhile, many elderly people in Vietnam do not have pensions. People 80 years old and older have no pension. Only when they grow up are they entitled to social allowances, they don’t have enough to live, so they expect their children too,” said Ms. Hong.

According to Vietnam’s national report “an aging society”, the number of elderly Vietnamese without pensions and benefits is 64.4%. It is forecasted that after 2035, three out of every four people of working age will have to “carry” three people, the opportunity for young people to accumulate and secure income in old age will be affected. Without a timely intervention policy, Vietnam “will be stuck in a cycle of young people without accumulation, old and poor, sick and sick”.

Not only have to put in effort, many “sandwich” people have to give up suitable jobs or high positions to prioritize taking care of elderly parents and young children. In the reporter’s survey VnExpress, 68% said they had to sacrifice their career, more than 34% reduced their working hours and income because of taking care of their loved ones.

Once when her mother was hospitalized, she had to take half a month off. Just a month later, she texted her boss again to ask for four days off because the maid asked for leave. Work is often interrupted, female office workers are no longer assigned important tasks by the company.

“There are times when I’m exhausted mentally and physically. But there are many options in work, but my mother only has one,” she sighed.

The Vietnamese tradition of “children must pay filial piety and take care of their parents” also makes the pressure on those who “sandwich” heavier. According to Associate Professor of Anthropology and Sociology Nguyen Duc Loc, Director of the Institute for Social Life Research, having to strive to be a pillar for others while also needing a support, causes many people to have a mental crisis. serious god.

Two years ago, Vu Thi Thu (25 years old, living in Hoang Hoa, Thanh Hoa), sent her one-year-old child in the countryside, and moved with her husband to Japan to set up a business. Both had poor childhoods, she and her husband tried not to let the past repeat to their children and compensate for the old age of their parents. Her and her husband’s domestic income is more than 20 million dong, which is not enough to do that. There was a time when both the mother and son were sick at the same time, and the couple had to borrow interest to pay hospital fees. Going to Japan, Thu no longer struggled financially, but lived in torment.

Her children no longer miss their mother, do not want to talk via video. Sometimes, she hears from relatives that her child is likened to an orphan by the neighbors. Earlier this year, Thu received news that her father had terminal cancer. She wrote an application for leave on the same day, and completed the procedures to leave Japan. But the outbreak of Covid-19 made Thu unable to return. For a month in a row, she had to take medication for depression because of chronic insomnia and prolonged anxiety.

In early November, Thu took a flight back to Vietnam. Her father was only skin and bones, unable to eat or drink. Thu’s son does not want to sleep with his mother. “Many times I feel tormented with my choice, but comforted myself, if I didn’t go to Japan, I would now have to sell my house to take care of my father,” Thu said.

Population aging is detrimental to the demographic structure and future socio-economic development, increases pressure on the social security system for the elderly, reduces human resources, especially young workers. Later, a child will likely have to face the problem of taking care of two parents and four grandparents at the same time.

Faced with concerns about an aging population, the Draft Population Law Outline is collecting comments to submit to the Government, prioritize the implementation of measures to encourage husband and wife to have two children in areas with low fertility. The State also encourages the payment of social insurance for the entire population, so that everyone has a pension when they get old, so they don’t become a burden for the next generation.

Mr. Loc said that, in order to reduce the burden on the status of sandwiches, the State should take the role of regulating public services such as health and education, so that the poor have the opportunity to access, instead of marketizing these services. this service. Besides, it is necessary to train people in financial planning skills.

According to Ms. Hong, nursing homes are a solution to reduce the pressure of caring for the elderly. However, not everyone can afford to send their parents to the hospital. Moreover, many people who have money still do not overcome public pressure to send their loved ones there. “Anyway, in the future, nursing homes will be a potential market when it becomes the choice of many modern families,” she said.

Experts advise people with “sandwiches” to actively build a financial plan for the distant future, so that their living needs are always guaranteed, and at the same time, they should review the concept of happiness, how is enough, instead of trying to do more, work harder, to enjoy things beyond the need.

Currently, Hong is still worried about her mother and daughter, wondering whether to have a second child or not. And Ms. Thu plans to finish arranging the family’s work and will go to Hanoi to work. At that time, with a little less money, but only half a day by bus, she was able to be with her relatives.

Names of some characters have been changed