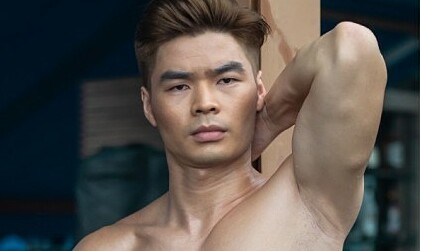 SingaporeWilliam Lin, 29 years old, a hawker stall owner, suddenly received a lot of attention because of his body like a bodybuilder.

Last year, the owner of Hong Xing fishball noodle shop in Bukit Marah, Singapore participated in the Mr. World Singapore and was noticed by the public even though he didn’t win the award. After the contest, the man from Fujian, China has a large number of fans, but he said he continues to do business instead of being a celebrity.

“Through my efforts, I hope street vendors are more recognized. Whatever you do, you deserve attention,” he said.

The Lin family is a farmer in a village in Fujian province. 15 years ago, the whole family moved to Singapore. At first, he taught Chinese at a foreign language center, his parents sold fish ball noodles. Three years ago, Lin took over a hawker stall when his parents were old, and his job as a language teacher became a side job.

The 29-year-old guy starts work at 10 am and clears the goods at 11 pm. If he had to make fish cakes, he had to get up at 1am to prepare the ingredients.

Busy, but Lin never neglects practice. He said he would go to the gym and run at any time to maintain muscles. If he doesn’t work out during his shift, he’ll jog home from the store, in lieu of his usual workouts.

“Honestly, I like the feeling of being complimented on my appearance. I want to be known by many people to spread positive energy,” Lin said.

Currently, he is married and has a five-year-old son. While doing business, taking care of her family and keeping fit, Lin had to shorten her sleep time.

“Many times I fell ill because of lack of sleep, but I have no regrets. Instead of going to nightclubs, drinking and living a leisurely life, I prefer to spend my time doing useful things,” the muscular guy laughed.

Minh Phuong (According to Asia One)