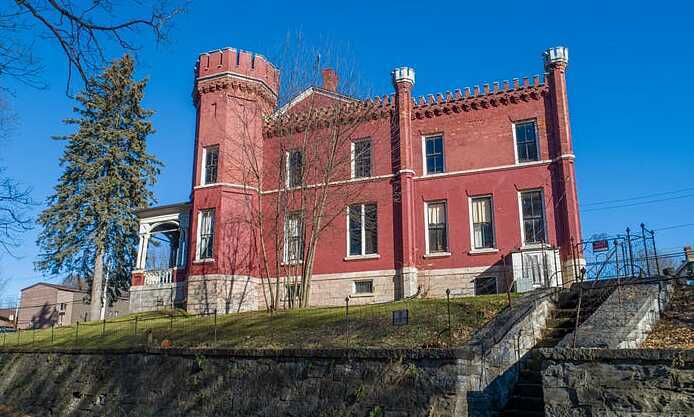 AmericaThe 650 square meter villa is sold with a starting price of only $ 25,000. Researchers have found there are ‘supernatural forces’ in the home.

This mansion is located in Auburn, a New York suburb built in 1871, the former owner is Mr. Samuel Laurie, a Scottish immigrant. Mr. Laurie came to the United States from a young age to run a business in a very popular wool industry. He quickly rose to fame in the industry and became the director of a plant on Rhode Island.

In 1868, he and his wife moved to Auburn to take over the local wool factory. Then he started to build a mansion overlooking the factory. This mansion was designed by Nelson Hamblin and cost $ 7,000 to build at the time. However, tragedy soon struck, making this place the haunted house it is today.

In 1893, an economic crisis caused Mr. Laurie to lose power in the knitting factories in Auburn and Canoga. He died in April 1895. After his death, his remains were returned to Auburn and his funeral was held at the castle.

Today, the mansion is a shell of former grandeur. It consists of three floors, six bedrooms, four fireplaces, and has space for the library, playroom and music room. Although many layers of paint had flaked off after the years had been neglected, many of the original structures were still intact.

The mansion’s intricate carvings and fireplaces are just some of the house’s historic features. The colored windows add to the spooky atmosphere.

The mansion also has a basement, which looks like a horror movie, but this basement can be a valuable asset to a future homeowner. The basement leads to the spacious backyard, where there is also a garage.

Although through many owners, but no one has ever changed the original architecture of the mansion. All furniture such as bookcases, doors, ceilings, 12 m high, to sinks and bathtubs are still there.

According to the New York UpstateMr. Lauries has 10 children – three of whom died as children. In August 1890, his wife died at the mansion due to the flu.

The events of Samuel Laurie’s family made many people speculate that the mansion was haunted.
Before the auction, real estate agent Michael DeRosa hired a feng-shui research team to the mansion and found evidence that it was “mysteriously colored”. “I have seen things that keep you from sleeping at night,” said one of the researchers.

Some may think that a haunted mansion will be difficult to sell, but the reality of paranormal can make the house more expensive. Haunted houses often attract thrill seekers, even professional paranormal investigators, filmmakers to turn into studios. One can also turn this historic mansion into a beautiful house as long as it is not “weak”.

Time to receive bids for the mansion opened earlier this month and closed at midnight on Halloween, with prices starting at 25,000 USD. Real estate broker Michael DeRosa wrote on Facebook that the house has received a lot of attention from around the world.

Bao Nhien (According to the Business Insider)