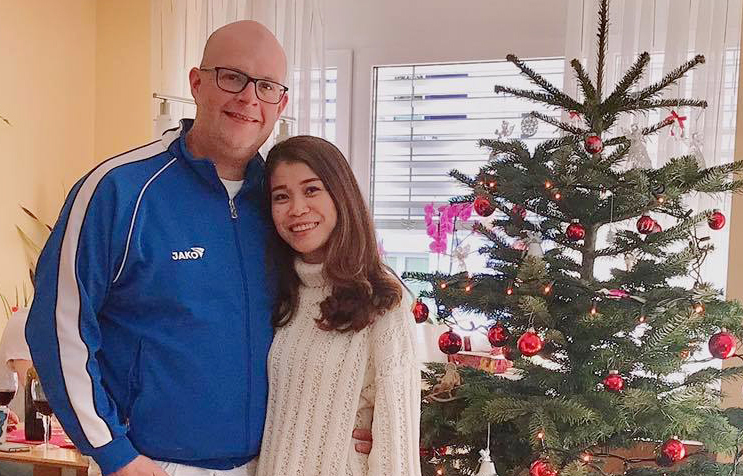 Having had difficulty living in Vietnam, Peter wanted to challenge Thuy Linh so he took her back to Liechtenstein on Christmas, the coldest time. But the girl got in very quickly.

Christmas 2018, the first time stepping back to her boyfriend’s hometown, Thuy Linh was overwhelmed by the majestic nature, white snow of the country with an area only 1/13 of Ho Chi Minh City. In Peter’s arms Jäger, a Vietnamese girl, was extremely excited with the bustling atmosphere with led lights and Christmas trees, and the flow of people flocked to the central night market to drink hot wine, bite chestnuts, and chat. Surrounding her are relatives and friends with a friendly smile at her, Linh did not feel lost.

A friend of Peter selling in the night market joked: “I’m short of staff.” Thuy Linh immediately rolled up her sleeves to help. She poured wine, recorded an order, charged the customer. Every time a guest said sentences in German that he could not understand, Linh called her boyfriend to translate. Everyone was enjoying looking at the petite but vivacious Asian girl. They shook hands and greeted her in turn. Some of Peter’s friends cheered on his shoulder: “This girl is interesting.”

Having been together for two years, even though he knew Linh’s personality, Peter was still amazed at her confidence, her ability to behave and her friendliness in front of a strange crowd when she first met. A Christmas launch was the intention of Peter. This is usually the coldest time, also the opportunity to meet the most people, he wants to know if she can withstand the cold, can adapt to her own culture.

“It was very cold that year, but Linh was not shocked or uncomfortable. Unsuitable for food, she still ‘lived well’ with instant noodles to bring or cook by herself. In the night market, she was as familiar as herself. Be part of it here, “Peter, 42, said.

Peter did this because he used to live in Vietnam, having struggled with hot and humid weather, food and culture. He met Linh in early 2017, when he had just arrived in Saigon for four months, took the position of sales director for an American shoe company. Peter wanted to learn Vietnamese culture, Linh wanted to learn English, so they talked to each other.

As a friend online for half a year, Peter made several appointments, but Linh refused. Once Peter asked directly: “Why do you refuse? What are you afraid of?”. The girl honestly: “I have not interacted with foreigners so I’m afraid. Chatting is fine, but meeting outside is not confident”. Peter encourages that I speak German, and English is not good either.

After the first meeting, the young Liechtenstein man completely fell in love with Thuy Linh because of his cuteness and personality. He dated constantly, but a few times she went only once. Every time she went to the appointment she always traveled by motorbike, asking for a fair share of money, then everyone’s way home. To take a step further, Peter suggested that Linh come by taxi, when I return I will pass.

“When I have been acquainted for a long time, I asked for permission to kiss before parting but she did not agree. Once she agreed to kiss her cheek, but also very reluctantly,” he shared. Since then, Peter has been more cautious. He knows he can’t rush, so he keeps in touch through text messages, and every business trip or return home comes with gifts for her.

One night out at night, the inn was closed and could not enter. Linh followed Peter to his house. She was worried, so she insisted on sleeping on the sofa. The next morning, Peter also thoughtfully drove Linh home. “That time, even Peter holding hands did not dare. I began to trust him more and meet more”, Thuy Linh, an accountant in a foreign company, said.

Their relationship officially established on a summer afternoon in June 2018. That day, Peter invited Linh to join the BBQ party with his colleagues. The Vietnamese girl cut the meat and vegetables evenly. Small person, but she can do anything fast; finished cleaning up again neatly. Peter’s friends praised Linh, making him so happy. When he got drunk, he walked over to her, hesitantly saying: “Looking at your way is definitely a good woman, a good wife. I see you and you are very compatible.”

Linh understands Peter’s statement. She had been waiting for something like this for a long time. But Peter was the type of person who acted better than words. “If not a few minutes ago, a friend of Peter told me he liked me, always told them about me, I would not dare to conclude his sentence was confession”, Thuy Linh shared.

Just falling in love with each other, they met a cultural “accident”. One week before my father’s death anniversary, Linh invited Peter to return to Binh Phuoc hometown. He accepted but said he would not return. Language disagreement made her unable to understand Peter’s explanation, but only heard the sentence “I love you but not ready to get married”. She was angry, burst into tears and asked to break up. Peter apologized frantically, taking a break from his face to calm her down.

Then the two of them sat down to talk. It turned out that a friend of Peter’s overseas Vietnamese said that in Vietnamese culture, “going home” means “debuting and getting married”, making him stay in love because he has only been in love for two months. Linh explained that inviting him to his hometown was merely about going back to play, “no one forced him to marry when he didn’t want to”.

Solving the misunderstanding, the couple is also normal again. Since that time, every weekend Linh returned to his hometown to visit his mother, so Peter followed. He loved Linh more and more when he knew that her situation lacked the love of her parents since childhood.

Together, Thuy Linh loved Peter’s personality more. He is 12 years older, so he becomes an “encyclopedia” to help her learn and grow. Peter’s principles of life also influenced Linh a lot. “He can buy me anything, but always wants me to do my part to be responsible for every little thing. Completely with my godly fidget, in any situation he calm down, “Linh said.

The visit to Peter’s family in 2018 also helps Thuy Linh believe that she has chosen the right person. On the occasion of Linh’s visit, Peter’s aunt held a big party, all 3 families gathered from 5pm to 2am in a cozy and happy atmosphere. “My family, since I know awareness, has never been a parent sitting on the same tray, eating with their children, so the feeling of being a member of Peter’s extended family, I feel very lucky and proud. “, Linh shared.

Linh’s mother-in-law loved her and was so simple that she refused to let her daughter-in-law sew for a dress, but only chose a dress of 250,000 VND and a necklace of 120,000 VND. She wears the bride-in-law’s outfit given at both the young couple’s weddings. On the wedding ceremony on November 27, her mother hugged Linh, rubbed her head and said: “Finally, after many days of hard work and waiting for Covid-19, I am officially my daughter-in-law”.

The Christmas atmosphere has filled each family in Liechtenstein. This year, due to translation, there will be no fair, or more than two families gathered. But that does not stop the Vietnamese bride from enjoying her first year as a bride. Over the past few days, Linh has been sitting on the sofa, by the warm fireplace, knitting towels to give to loved ones.