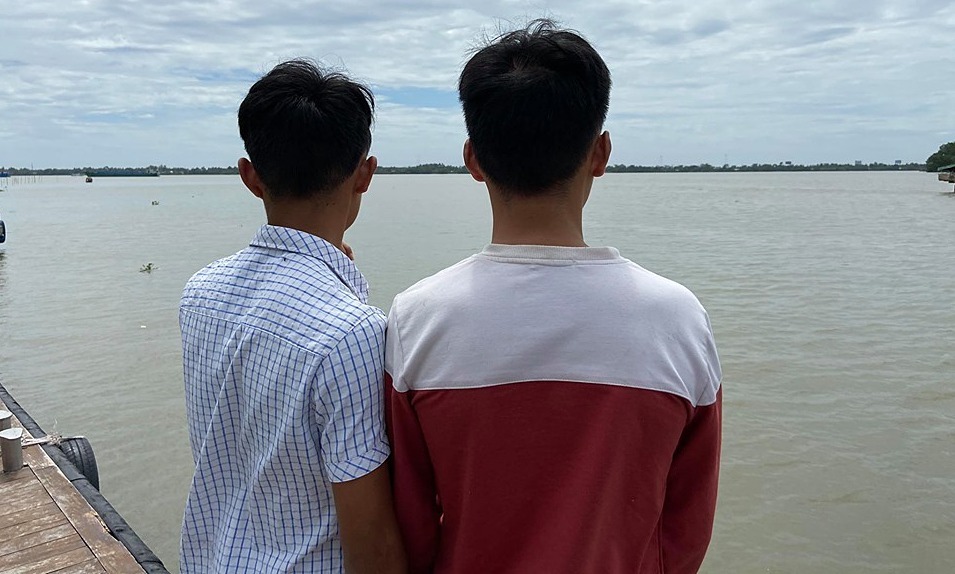 It took three times to change cars, over 2,200 km, two boys Dien Bien Phen and Du were able to reach Kien Giang. Only a few clothes in the backpack and 1.5 million VND borrowed.

A few days earlier, Alum (19 years old) saw on social networks that there were posts to recruit workers to select shrimp in Kien Giang, so he invited Du with him. Not understanding what to choose shrimp, nor knowing how far Kien Giang is, both decided to leave. The two failed to earn a penny during their separate weeks because of Covid-19. Their greatest desire is how to find a job.

But on arrival, instead of being taken to a shrimp lagoon, they were taken to a harbor. Alum and Du were tied up, using guns and threatened to sign a loan contract to pay the job brokerage costs. The two young men were forced to sail to sea. The boat owner said that they will go fishing once every three months, each time they get three million dong.

Coming from the mountain, the two boys had never seen the sea, could not even swim, but were still locked up in a fishing boat to learn some basic skills, preparing to sail. On the fifth day, one of the six fishermen on the boat revealed that the two boys did not have to build this fishing boat, but at sea they would be sold to other ships and exploited at sea. This person lent Alen his phone to call the family journalist, and then connected with the Blue Dragon Children’s Organization (Blue Dragon) with instructions on how to escape.

“We are afraid we will never see land again if we go to sea,” one of them said when rescued in late June 2020.

Brokering a job, forcing to sign a short loan and making a debt repayment is a trap for the teenagers who are looking for a job to relieve the economic pressure that Covid-19 “puts” on their shoulders.

Thu, 21, a student at a college in Saigon, lost her part-time job when the shop was closed due to instructions for social exclusion. The girl from Binh Dinh could not find another job, so she applied for a job in a cafe in the suburbs. But when she arrived, she found out that this shop was a prostitution in disguise. They used the technique of paying for transportation and food, so Thu suddenly had a debt of 5 million and was forced to work to pay it off. The girl who refused to accept the guests was detained and starved.

At the same time Thu was in trouble, a family of five girls, both 16 years old, from Sapa appeared for help. Summer vacation, so they find work to help their families Through social networks, five students were offered jobs in a Hanoi restaurant. After a day in the city, everyone lost contact. Families asked authorities to step in, and finally found their child locked up in a disguised karaoke bar in Bac Giang.

An international police agency (Interpol) warning in September said that environmental, social and economic changes caused by Covid-19 have contributed to an increase in child sexual exploitation and abuse. all around the world. The main reason is the closure of schools and the transition to virtual learning environments, which increases the time children spend online for entertainment and learning purposes …

The United Nations Population Fund also added that over the past few months in Vietnam, hotlines to receive information and provide support services to women and children have received calls for rescue. physical and sexual abuse, labor exploitation … twice as much. Skye Maconachie, co-CEO of Blue Dragon, said that in 2020, the number of children, especially teenagers and girls trafficked within Vietnam will increase significantly.

During the previous 17 years of operation, the majority of victims were rescued by Blue Dragon after being tricked into selling into forced marriages or brothels in China. However, in 2020, not only will the number of rescues increase, but also nearly 20 cases of sexual exploitation in different regions of Vietnam – something that has never been seen before.

The impact of Covid-19 also increased the number of street children. In 2020, Blue Dragon rescued 153 children in Hanoi, nearly double that of 2019 (85 children). The epidemic does not distinguish between class, class or status, but it hits the poor most strongly.

Mr. Do Duy Vi, manager of the street children division of the organization, said that in April-May 2020, they must simultaneously support many poor families who are sick to go to the hospital, take care of their rent and school fees for their children. the child does not have to “go to the street”. “Most of these families live in river slums, do not have papers, so they do not have access to supportive policies of the state”, said Mr. Vi.

The pandemic also caused nearly 80% of victims of trafficking and street children supported by the organization, losing their jobs due to reduced load in restaurants and hotels. The common point of this group is low level, just entering the profession.

Huy Quang is the child of a family of street vendors in the Hoan Kiem lake area. In the past, he used to pick up bottles, newspapers, and sell candies around the lake. Being helped by Blue Dragon three years ago, he found an interest in making drinks. Suddenly losing his job due to Covid-19 caused Quang to stop. The bad habits from before reappeared. He likes to play online games, neglects to find a job.

That was when the psychologists came in again, finding many jobs in the organization for him to do. In October, Quang was accepted to run a table at a restaurant on Ly Thuong Kiet street. After two months, he is assigned to manage bar, bartender. Earning money to pay for himself and helping his family, the young man is happy, away from bad habits.

“Up to the present time, there are still many of our children who have not yet found a job, because the starting point is usually at the last level of the job ladder,” said Huong Lan, Blue Dragon’s career program coordinator. , to speak.

* Some victims’ names have changed

In 2020, the Green Dragon Foundation will face great challenges when the destitute children need help doubling, aid is greatly reduced due to the impact of Covid-19.

In order to bring a warmer New Year to the wandering and difficult children of the Green Dragon Foundation, the Hope Foundation organizes a program to give 400 Tet gifts. To join hands to send Tet to the child members of the Green Dragon, readers can make a contribution here.