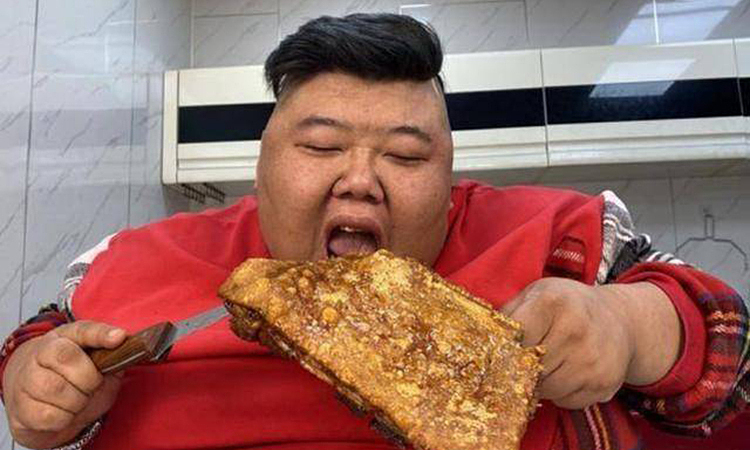 When the 260 kg limit of the electronic scale also did not show enough body weight, Fat Monkey thought it was time to lose weight.

As a food blogger, the thing that hinders Fat Monkey’s weight loss is fear of a drop in viewership. When he made his first video at the end of 2019, he only had a few dozen viewers. It wasn’t until she ate all the braised duck stock in front of the camera that Fat Monkey’s channel really exploded, gaining hundreds of thousands of followers. Since then, this man has been constantly urged by fans: “Eat more!”.

Fat Monkey’s real name is Hau Ngoc, was born weighing 4.5kg and was continuously overweight for the next 33 years. At the age of 6, the boy could eat all the big baba by himself. After graduating from secondary school, Hau Ngoc worked at a waste incineration plant in Hengshui city, Hebei province, but for a while resigned himself for fear of health effects. Then he sold rental goods, but the revenue was not positive.

His increasingly heavy body also prevented him from finding a job. He drove a taxi, but even though the driver’s seat was fully reclined, it was still cramped. He went to deliver food, but in old buildings without elevators, weighing 150 kg at the time, he couldn’t even get up. “Others deliver dozens of orders a day, but my maximum is only six.” Hau Ngoc then quit her job and opened a fried rice restaurant at the end of 2019, but unfamiliar customers had to close because of the Covid-19 epidemic.

Once by chance, a friend with the nickname “Half ton” invited him to appear in some videos introducing food at this person’s shop. His friend gave him the nickname “Fat Monkey” from his Hou surname. Hau’s appearance attracted many customers’ attention. They commented: “This guy must weigh a ton, even fatter than the owner of the shop”.

From this comment, Hou thought why not produce a food video himself, because he has a very remarkable body. In December 2019, he filmed his first work, a glass of pumpkin juice without sugar, nicknamed Fat Monkey.

In a 6-minute video, Fat Monkey shows you how to choose ingredients and the processing process. When the finished product was finished, he only took a small sip. “Initially, I only intended to taste the food instead of devouring it like later.”

Several dozen views with the first two videos made Hau Ngoc’s original idea shake violently. In the third video, he makes duck neck hot pot and eats it all by himself. Immediately the traffic amounted to 600,000. Fat Monkey did not explain the reason, only exclaimed “Unexpected”.

Gradually, this man understood, eating a lot is also a form of talent. Ten days later, he made a video of a smoked pig’s head and continued to eat it all. The number of viewers immediately reached a million. Messages and comments flooded the personal channel. The content of the comments were similar, all asking him to eat more. “Watching him eat well, it feels great,” Fat Monkey said of the messages sent by fans.

To please his fans, the fat man stretched out his serving and zoomed in, filling the screen with a close-up of him munching. Fat Monkey is eating more and more fat, also to please fans.

Since then, Fat Monkey has eaten 22 servings of beef feet, several hundred kilograms of grilled lamb, 18 servings of roasted suckling pig… Every month he spends 10,000 yuan (36 million VND) on food. In December 2020, Fat Monkey’s channel reached the highest level of traffic. The number of views this month exceeded 48 million, making him one of the food bloggers with the highest number of viewers in Asia in December.

Fat Monkey took a screenshot of the ranking website, printed it, and framed it in the belief that “there won’t be another moment of such glory”. This man did not disclose the specific amount of his monthly income, only saying that the advertising revenue amounted to tens of thousands of yuan per month.

However, there was a very short comment that caught his attention: “I am the funeral trumpeter, I have been following you for a long time”. Although this comment has been around for a few months, it is always at the top of the comment area due to so many likes. This proves, many people who watch Fat Monkey’s videos are not for the sake of love, but wait to see an obese person with unhealthy eating habits, how long will it be dangerous to life.

Although startled when he saw this comment, Fat Monkey believed it was a sarcasm, jealousy and anger. However, his father did not think so. He repeatedly asked his son to stop eating videos, but he refused.

Malicious comments can be ignored but the body has alerted Fat Monkey. Even talking, he also felt heavy and really tired, short of breath if he took a few steps. This man has never left Hengshui city, his desire to go out is getting stronger, but his oversized body makes him unable to fit any car.

However, this was not enough to make Fat Monkey give up making food videos. If you quit, there will be no job suitable for overweight people like him. There is also a video support team and a family of five that need to spend a lot of money.

In mid-2000, China blew the whistle on mukbang (overeating) videos to combat food waste and eliminate unhealthy eating habits when a person ate ten times more than usual, more than 100 videos of Fat Mokey were removed. from platforms. This was also the time when the man felt “unable to eat”. Although he tried to show his appetite in front of the camera, his appetite had long since been exhausted.

“I think I’ve reached my limit of fat. When the body is about to succumb, weight loss must happen,” Fat Monkey shared.

This man has just built a new plan, which is to switch to making videos about weight loss. “This is a very risky move,” he said. Although the number of followers on Fat Monkey’s channel is decreasing, there are still people who love him. “This gives me confidence.”

In the latest video, Fat Monkey made a local snack with pumpkin as the main ingredient without meat, fish or fat. This video stopped at 190,000 views, but there is a comment: “If you decide to be vegetarian for 5 days, I will eat for 15 days”. This got Fat Monkey excited.