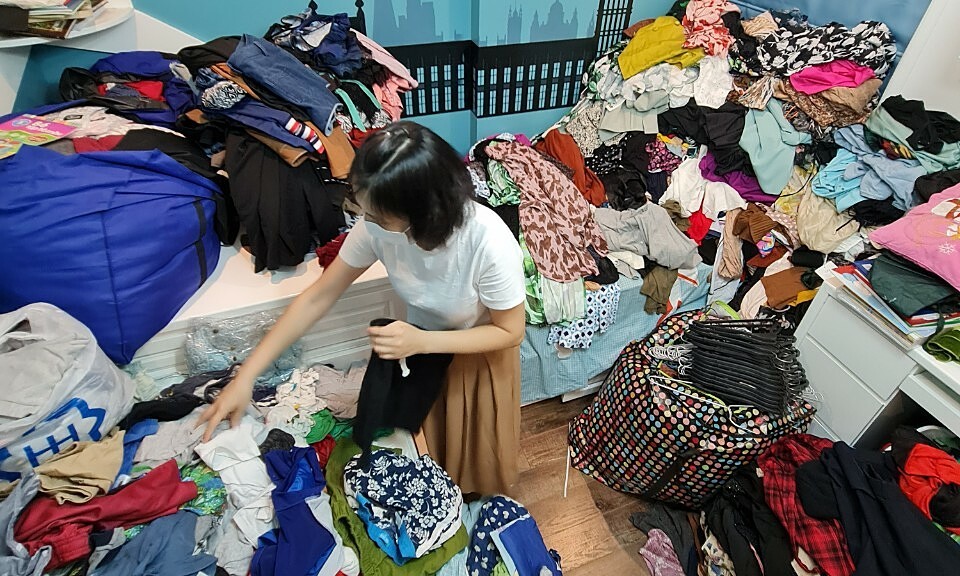 HanoiEvery time I open a wardrobe, I see “no room for stuffing” but don’t know what to wear, Huyen Trang knows she needs to revolutionize this area.

But the 32-year-old from Thanh Xuan district also envisions rearranging all her clothes, at least for a few days. Due to over-shopping and the habit of hoarding, Trang’s things piled up in the closet, under the bed and even had to send a part of it to her mother’s house.

At the end of April, when she was preparing to move to a new house, Trang was recommended by friends to a professional wardrobe arrangement service. “They say each shift must hire at least two employees for two hours, the price is from 250,000 VND to 400,000 VND an hour depending on the ‘clutter’ level of the wardrobe,” Trang shared. That day, it took two clothes-folders four hours to put her wardrobe in order, normally the clothes that would have to be stuffed into two or three closets are now neatly arranged, sorting each item and color, in a cabinet. Total cost is two million.

“The money is worth it because if I let myself do it myself, I don’t know when,” Trang said because she was busy working and taking care of her baby all week.

According to research, this service in Hanoi is mainly provided by house cleaning, industrial cleaning and package moving companies. “I found a party that specializes in arranging wardrobes and providing accompanying accessories, so the price is also cheap, so try contacting,” the young mother said. That day, Trang had to take pictures of the current state of the wardrobe and choose a date for two experts to come to support.

“In addition to increasing the aesthetic, making the wardrobe tidy, I also learned to limit my shopping, because everything I need to wear is displayed in front of me,” she said, and said that she no longer spends hours looking for clothes. afraid to invite friends over because the house is messy.

Wardrobe cleaning service is also Thuy Vy’s savior in Bac Tu Liem district, when preparing to change seasons. The 27-year-old girl was skeptical when looking for the service, due to the new type, few people know and the price is quite high.

Calculating that it only took more than an hour to organize the closet, but witnessing the two employees planning and working continuously for three hours, she admitted folding things is not simple. Clothes are classified according to materials, features, colors… arranged suitable for each type.

“Many people think that spending 1.5 million dong to hire someone to fold clothes is a luxury, for the rich. But if they solve the clutter, the closet is neat and tidy, saving time searching, I see I can still afford it by arranging once or twice a year,” Vy said.

This service is still quite new in Vietnam, but this service is said to have originated in the US in the 1980s, developed in Japan and is now a very hot profession in China.

No longer a spontaneous service, in early 2021, house arrangement work (used to be considered a part-time job) gradually became popular when it was added to the list of new occupations in China. Especially during the pandemic, the country’s demand for cleaning professionals increased by 400%, as people spend a lot of time at home and shop online, leaving closets with no space.

According to data from China’s Ministry of Manpower and Social Security, more than 40% of clothes arrangers have an annual income of 100,000 yuan (340 million dong) and are still growing strongly.

Bian Lichun, founder of Liucundao, a school that teaches the art of arranging furniture for the wealthy in China, said there are now more than 3,000 professionals in the field of cleaning. CCTV projects this emerging industry could reach 100 billion yuan ($14.9 billion) in revenue in 2020 alone.

This service appeared in Vietnam since 2019, initially to serve the needs of foreigners. “With the increasing demand and income of the people, the closet cleaning service will become popular and popular. First of all, big cities,” said Ms. Cao Thi Le Hien, 36 years old, founder. a wardrobe organization in Hanoi, said.

In the past two years, Ms. Hien’s company, with well-trained staff from Chinese and Japanese professional courses, had to operate moderately due to distance, many customers became F0, F1. But in recent months, the number of visitors has increased rapidly. In just the first four months of the year, Ms. Hien’s company has served hundreds of families, with a total working time of over 2,000 hours.

She said, most of the customers are female, have a good income, a lot of clothes, between the ages of 25 and 40, are married, have a busy job. The peak season of this profession is at the change of season, guests need to change clothes or move house. Currently, the company has a full schedule for the weekend until the end of May. The number of customers booked during the week is less, due to busy work.

Depending on the area of ​​​​the house, the volume of clothes and the needs of the customer, after the survey, the experts will make a plan to design a scientific wardrobe and provide advice to help the homeowner neat and tidy. On average, each family takes about four hours, but for celebrities, many clothes and accessories take 3-4 days.

According to Ms. Hien, the biggest problem of customers is that they shop a lot but don’t have time to sort, organize and manage their possessions. In particular, the habit of cramming causes many clothes to be bought for a few months or even years without being used by the owner.

“There are customers who buy hundreds of pairs of black leggings of the same style, many dresses with tags still intact, but they always complain that they don’t have anything to wear,” the 36-year-old owner shared. Not only helping to make the customer’s wardrobe more organized, but also in the process of arranging, the experts are also responsible for consulting and guiding how to arrange in a scientific and minimalist way. “That means you have to put things somewhere so that the owners can easily find them. Only when they are organized can they save their purchasing power,” she said.

The difficulty of this profession is new, the cost is quite high and requires meticulousness. Many customers have needs, but when they hear about the service price, they change their mind, the number of regular or recurring customers is still limited. “In the coming time, we will have more incentives for many customers in different segments, thereby making this type more popular,” said Hien.

As for Huyen Trang, she said spending millions to hire someone to fold clothes is quite expensive if done periodically. But in financial conditions, can try twice a year, to refresh the wardrobe, remove unnecessary items.

“If the price is cheaper, there are many preferential policies, I will rent often,” she laughed.