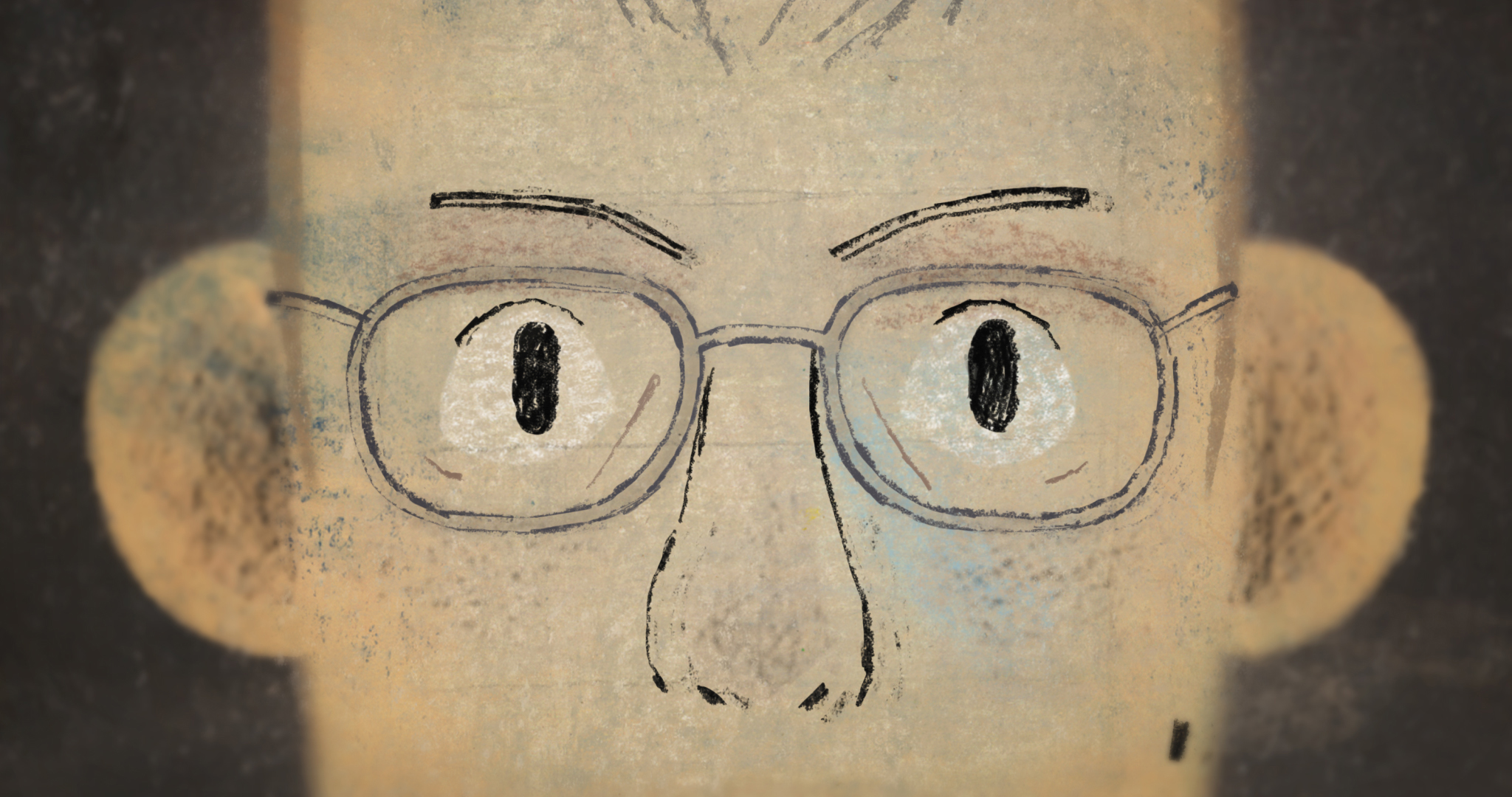 “Memories, memories / You will remain my friends”

Far from the nostalgic song of Johnny Hallyday, the film by Bastien Dubois, which uses the title, on the contrary evokes the repression of memory. That of the director’s grandfather, a veteran of the Algerian war.

Shunned by Cannes and Annecy, Remember Remember seduced the Sundance Film Festival where it won the prize for best animated short film on Wednesday February 3, after winning numerous awards, including the Emile-Reynaud 2020 prize for best French animated short film or the Grand Prix des Summits of animation cinema, in Montreal. It is in competition at the Clermont-Ferrand Festival which takes place online this week. 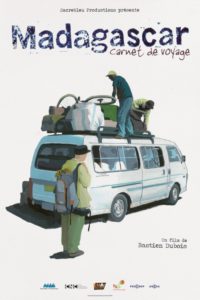 Adept of autofiction, Bastien Dubois likes to stage his questions about his environment and the people he meets. In Madagascar, travel diary (2009), nominated for the Oscars in 2011, it retraces the journey of a western traveler confronted with a Malagasy custom which marks the importance of the cult of the ancients. He repeated the same device in a series broadcast on Arte in 2013, entitled Travel portraits.

In Memory Memory, Bastien Dubois questions the past of his ancestor, seeking to know what he saw in Algeria and if he participated in the exactions of the French army. He stretches family memory on the couch of a psychoanalyst to try to understand the reasons for the taboo surrounding these memories. An imperfect but sincere work which is not without evoking Waltz with Bachir, by Ari Folman, another question on occulted memory.

Before the interview with Bastien Dubois, here is the film, thanks to the essential Arte program, “Court-circuit”. 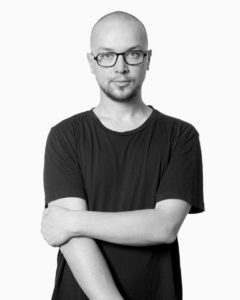 Remember Remember tells its own story, but how was the film constructed?

Bastien Dubois : It had been a long time since I wanted to make a film on the Algerian war as my grandfather had lived it. But I couldn’t. I did not take this step because I wanted to spare it. One evening, I had a drink with my producer, Amiel Tenenbaum (Blast Production), and he advised me to make a film about the difficulty of looking back on this past. It unblocked me. I wrote 15 pages of screenplay in one afternoon.

Initially, the film was shorter, it lasted 8 minutes and told the story of a grandson who seeks to know what his grandfather did during the Algerian war, whereas this one refuses to talk about it.

Has the film evolved a lot?

Yes. Every time I saw my grandfather, I conjured up Remember Remember. I am convinced that this prompted him to deliver, in the course of a conversation, the anecdote (appearing in the film) of the mace made by his regimental friend. He then cried. This shattered the family legend, fueled by photos, nice memories of gazelle hunting …

The suffering he manifested proves that the violence of the conflict has rubbed off on him. My grandmother says it: “When he came back, he was not the same anymore”. I knew him as a rather rude, rude, racist person. What man would he have been if he hadn’t faced war?

I then reviewed the whole structure of the film. It took a year. As in Lost in La Mancha, by Terry Gilliam (chronicle of the sinking of the shooting of an adaptation of Don Quixote), I wanted us to follow the film in the making.

For the dialogues, I drew a lot of elements from the feedback given to me by a psychologist to whom I had submitted my script. 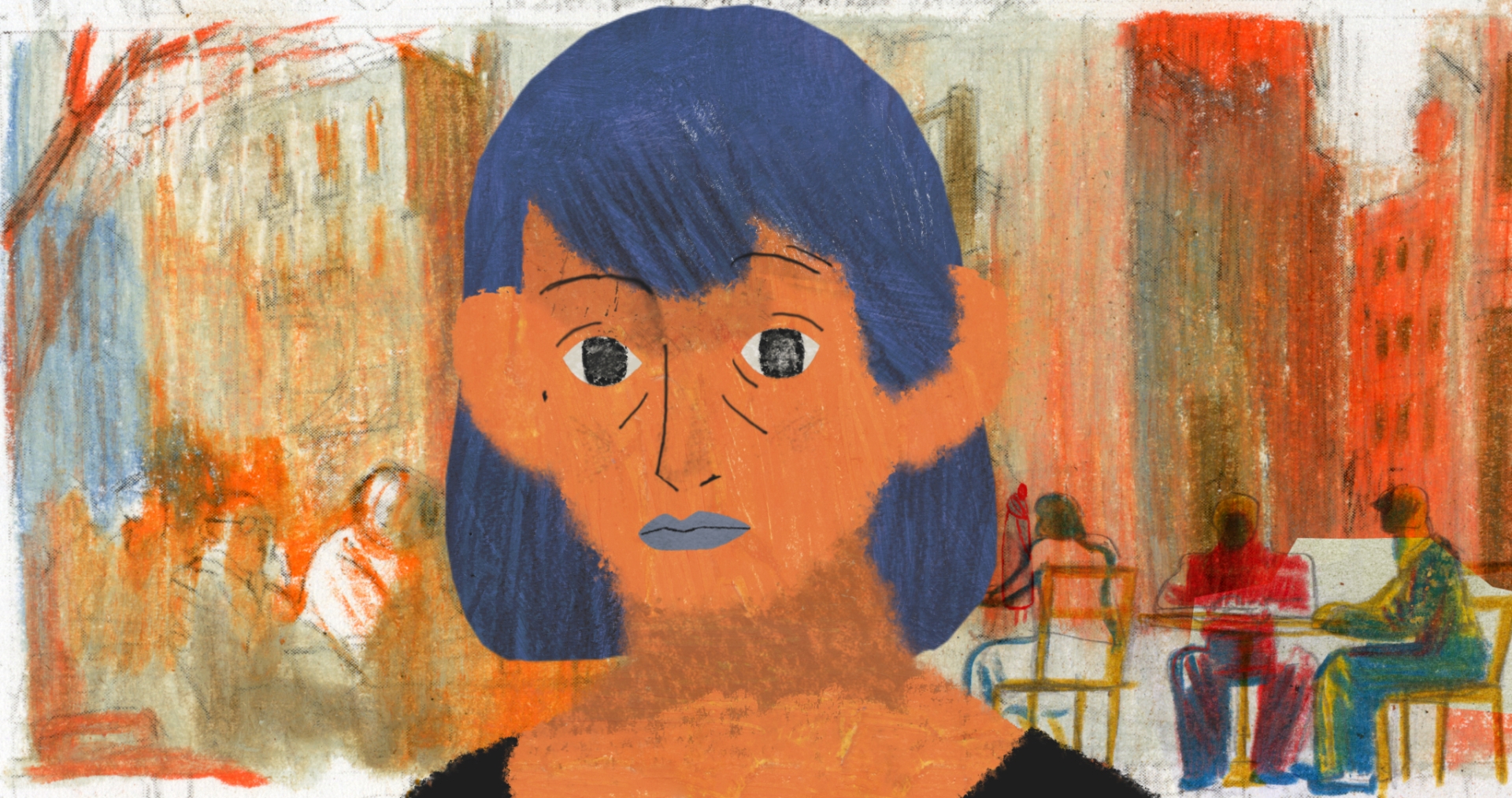 Is the title of the film an allusion to Johnny Hallyday’s hit?

Yes, the song was released in 1960, shortly after my grandfather came back from Algeria. I had also planned, in a previous version of the script, to integrate it into the film. Another song, Brothers in arms of Black Bérurier which alludes to Memories memories, was also to appear in counterpoint.

The film has two graphic identities: the autobiographical part, with a rather crude line, the sequences imagining what the grandfather could have done during the Algerian war with the appearance of a cartoony cartoon. What guided these choices? 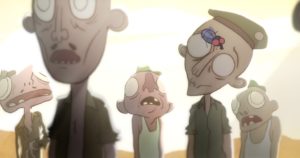 These very “cartoon” sequences were intended to embody the abortive film I had planned to make on my grandfather’s past in Algeria. They were taken in hand by Gilles Cuvelier (director of (Fool Time) Job) at the Train-Train studio, which hardened the line of the childish style that I had imagined.

On the autobiographical part, I had envisioned a very light 2D style at the start, a clear line without colors, because I didn’t want it to take its place in the story. And then, I changed my mind when I worked on another project with the Argentinian designer Jorge Gonzalez, whom I really like.

His comics deal with the same themes as my film: transmission, filiation, memory. And this, through drawings like scratched, close to abstraction and made up of layers and veils that hide things and memories. 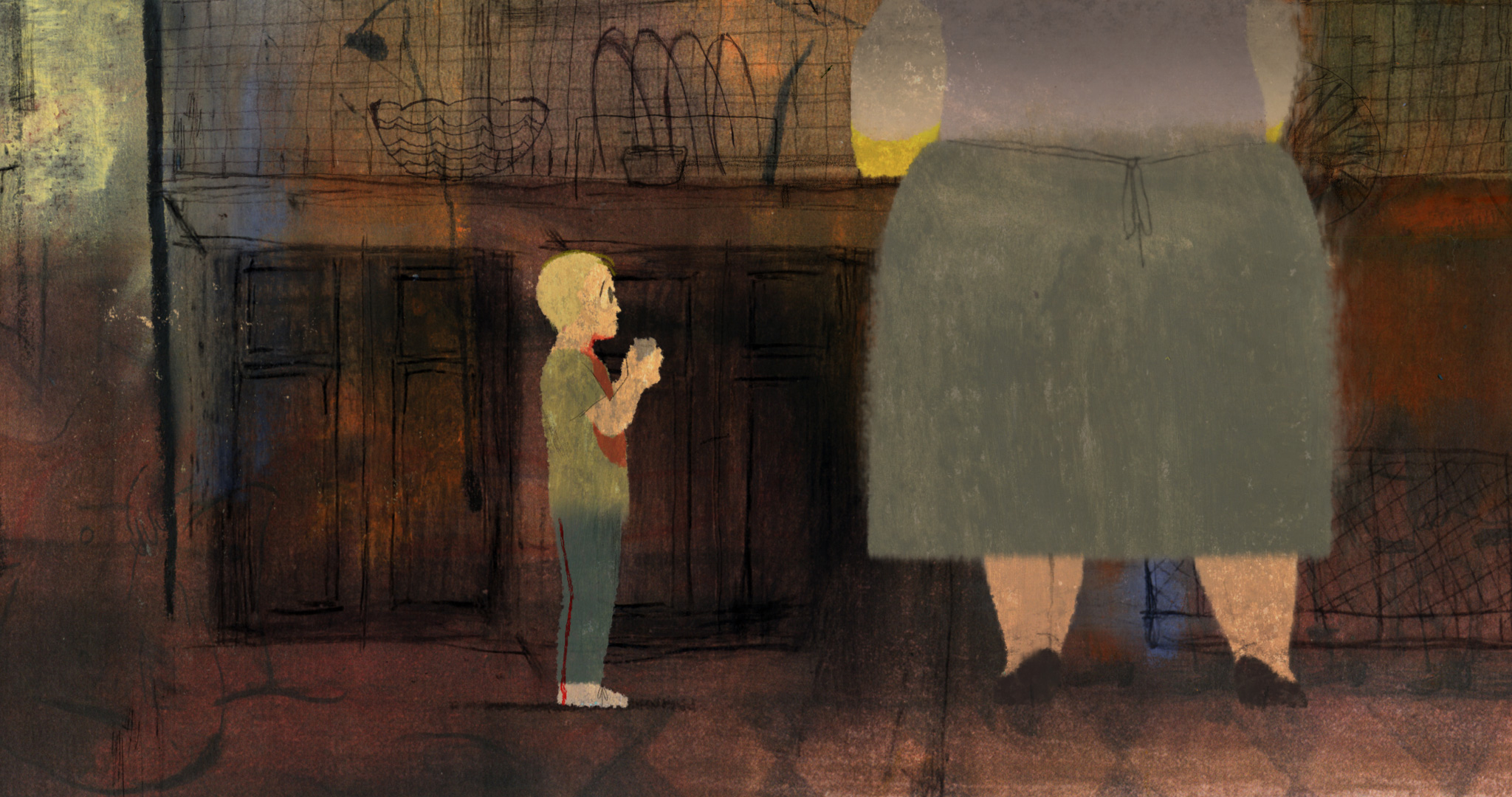 Jorge Gonzalez was not available but sent me 600 to 800 drawings that I peeled in Photoshop to rework them as if I was sculpting in the raw material of his creations.

What were the reactions of your relatives? 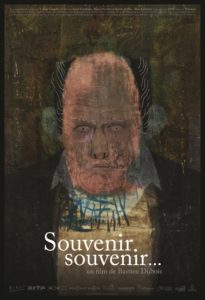 My grandfather died before the end of production. It’s horrible to say, but it relieved me a bit that I didn’t show him the finished movie. On the other hand, I regret that my grandmother could not see it, because she did everything to help me. It is also his voice that we hear.

My father’s too, by the way. He was apprehensive because he knew he would be presented as being in denial. He reacted a bit dubiously, but I think he was prepared for something difficult.

Have you had any reactions from the public?

I have never received so many. I receive several emails a day. Some want to share similar experiences. Others tell me direct testimonies of members of their family, or on the contrary, of their regret not to have been able to speak about it with their parents.

I was a little afraid of aggressive messages from veterans, but only an alumni association (4ACG), contacted me and spoke about the film. I will soon present it to Rennes in a college. I would like him to join the Canopée or high school students and cinema network to talk about it with school children. 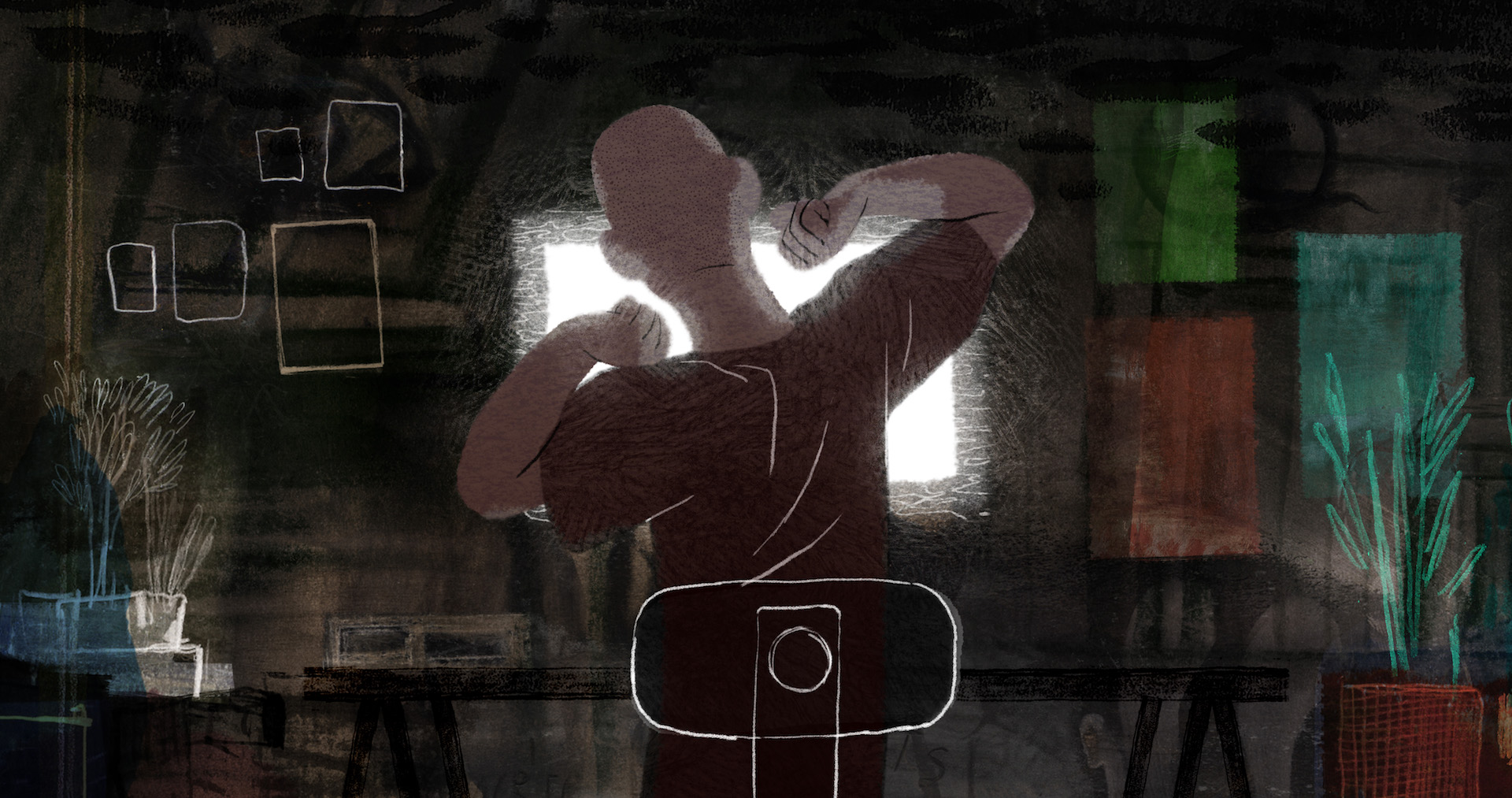 What are your projects ?

I’m working with Blast Production on a feature film project co-written with Julie Nobelen and dedicated to journalist Ana Politkovskaya who investigated the war in Chechnya.