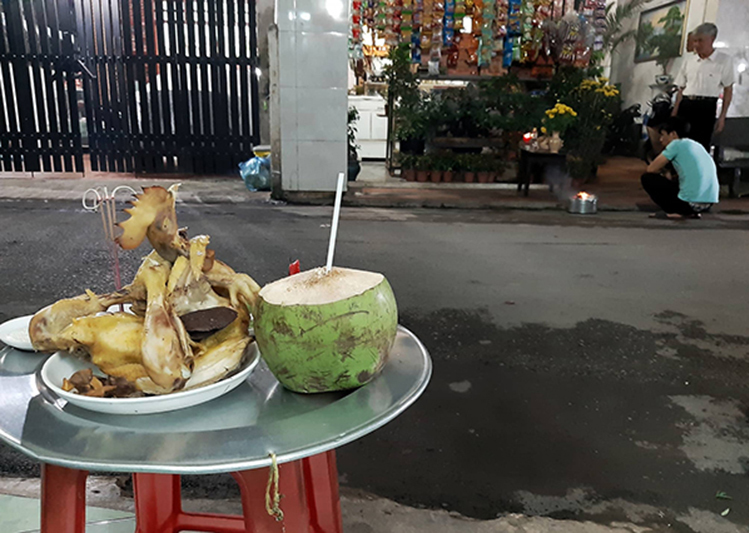 New Year’s Eve offering is an extremely important ritual on the 30th day of Tet with the meaning of seeing off the old year and welcoming the new year with good luck and fortune.

Talking about Vietnamese customs and habits, first of all, we must mention the work “An Nam custom book” by Mai Vien Doan Trien. He was born in the 7th year of Tu Duc (1854) in Huu Chau village, Ta Thanh Oai, Ung Hoa, Ha Dong (now in Huu Thanh Oai village, Huu Hoa commune, Thanh Tri, Hanoi). He passed the Bachelor’s exam at the age of 33, and became a mandarin at the age of 36.

“An Nam book of customs” by Doan Trien was compiled at the end of the 19th century and the beginning of the 20th century, which specifically describes important festivals; but in the New Year’s Eve ceremony, we don’t mention the outdoor tray (outside the yard or in front of the door). In other related bibliographies, the origin of the outdoor New Year’s Eve offerings was not found.

From 2000 and earlier, the display of the New Year’s Eve ceremony in the open air was very rare. In rural areas, provincial cities, so far, it is not common to display outdoor New Year’s Eve offerings…

According to “An Nam custom book” by Doan Trien: On the 23rd, we see off the Tao Quan, and on the 30th we process the Tao Quan. On New Year’s Eve, we offer sacrifices to the god Hanh who controls the old year and the new year, which is called “tong ex welcome new year” (sorry the old year god Hanh to heaven, welcome the new year god to come).

The calendar and the God of Death say that each year, there is a ruler, along with his subordinates, a military mandarin and a judge who is sent by the Jade Emperor to take charge of the world. Accordingly, at the time of New Year’s Eve (the transition between the old year and the new year), families make sacrifices. Action includes 12 people, alternately managing the earthly county for a year, determined according to the zodiac sign. The book of Thong Thu clearly states: Ty Chu Suu Trieu, Wei Vuong Dan/Cat Trinh, Chu is jealous of Ngo people/ Ngo Qin smells Song, King Qi is/Rooster Lu Tuat Viet, Luu Vuong Hoi. That is, the year of the king of Zhou is the mandarin, the year of the ox, the king of Zhao, the ruler, the year of the people of Wei, the king of the Hanh… The other years follow that inference.

New Year’s Eve offering is a brief Nom vow, so that every homeowner can do it himself. The most important thing is to invite the correct names of the old and new year gods. Specifically, in the year of the New Ox 2021 (old year) Trieu Vuong Hanh control, Tam Thirty-Sixth Merchants, and Khuc Tao Judge. Year of the Tiger 2022 (New Year) Wei Vuong Hanh control, Jupiter Hanh Luong, Tieu Cao Judge.

The names of the annual gods can be substituted for the New Year’s Eve offering (sample) to be read in the worshiping ceremony as follows:

To prepare for the ceremony, light a lamp (candle), burn incense, etc., when finished, join hands respectfully towards the ceremony tray, and pray:

– Pay respects to the Buddhas and bodhisattvas of the ten directions. Homage to Hoang Thien, Hau Tho, all the gods.

– Dear Sirs: The Old Year of Hanh controls Thai Tu Chi, the deity of Trieu Vuong, the Thirty-sixths of the Han Dynasty, the Quan Quan Quan. The New Year of the Hanh commanded the god of Tai Sui Chi, the god of Wei Vuong, the god of Jupiter, the god of war, and the Tieu Cao Judge. The scene of Thanh Hoang, the Five Directions, the Five Routes of the Dragon Circuit, the God of Wealth. The Five Earths Five Earths Phuc Duc is the main god. The Dong family presides over the fate of the God of the Gods Palace. The Turkish version. The family of the gods.

On the occasion of the New Year’s Eve in the year of the Tiger year 2022, the host is: ……………… residing at: ………… sincerely buy incense sticks and gifts presented before the judgment.

We respectfully invite you to worship Buddhas and deities to come before the judgment to enjoy the offerings and prove their merit.

New Year’s Eve send the old to welcome the new. The old year has passed, the new year has come, the three yangs have opened up, and thousands of statues have been renewed. Mr. Thai Tue respects the god above, obeying the orders of the Emperor Ngoc, to supervise ten thousand people, and below to protect living beings and eliminate evil spirits. The old mandarin is about to pay homage to the missing door, to save happiness, to save grace. The new mandarin took over the body of filial piety, bestowed wealth and fortune, and blessed us with all four sides to be blessed with human resources, progress in things, peace and prosperity.

I pray that the gods and goddesses will welcome the ancestors, uncles, aunts and uncles of our clan, to be reunited with family and celebrate the New Year.

We worship with sincerity, bow to witness! (The ceremony of 3 bows)