(Sports news, MotoGP racing news) After a 5-week break, the MotoGP 2021 rotation is back at the Red Bull Ring racetrack, Austria with mixed emotions.

It rained during the official race day match and only slightly affected the Moto3 race. Deniz Oncu (KTM Tech3) got the first pole in the 30th start of his career. However, those efforts “died the river” when the racing team decided to change his slippery tire too late before the race despite the relatively wet road surface. That made him fall to the bottom of the race and empty-handed at this stage.

The race took place with only two main ‘characters’, who are also the two drivers who are leading the current individual rankings. Pedro Acosta and Sergio Garcia quickly created a big gap with the chasing group and were the only ones competing for the No. 1 position. Acosta persevered in the pursuit and had no less than 1 chance to pass, but Garcia did. reply immediately.

It was not until the last round that the results were decided when both collided in the third corner and then Acosta advanced in the penultimate corner to get the 5th victory in the past 10 stages of the season, continuing to widen the gap. on the chart to 53 points.

Garcia, after being overtaken, deviated from the optimal track, causing him to slip off the track. But due to the distance with the rear handlebars is too large, steering wheel #11 can still park the car and run to the finish line in 2nd place. The remaining podium belongs to veteran driver Romano Fenati after defeating Jaume Masia in the corner. final.

Moto2: Bezzecchi is first crowned in 2021, Red Bull KTM is outside the top 3

Remy Gardner has the 3rd pole in 2021 and aims to further consolidate his lead in the personal rankings. Although he did not have a good departure, the opponent who was following him the most, also his rookie teammate Raul Fernandez, had a worse start. Bezzecchi has their first win in 2021

Starting from P4, Fernandez made a mistake and fell to 7th, with almost no chance of winning this stage. However, Gardner also encountered many difficulties in the middle of the race when he made a mistake in the 4th corner that caused him to drop 4 places and no longer have the ability to compete for 1st place.

Taking advantage of this opportunity, Marco Bezzecchi kept his composure to win his first 2021 and continue to raise championship hopes. Aron Canet finished second and had the third time this season to be the runner-up of the race. Meanwhile, Augusto Fernandez has the 2nd podium in a row after nearly 2 years of nothing for the Marc VDS racing team. Gardner and R.Fernandez finished 4th and 7th respectively in this leg.

The MotoGP racing village this week welcomes the return of “samurai warrior” Dani Pedrosa for the first time since the final stage of the 2018 season at the KTM factory racing team. However, fans have also learned about the decision about the future of legend Valentino Rossi, that is, he will officially retire from the tournament at the end of this season and retire from his career after 26 seasons of battle. This will be a huge loss for the world MotoGP. The accident caused Pedrosa and Savadori’s car to catch on fire, fortunately there were no casualties

Returning to the official race, rookie Jorge Martin (Pramac Ducati) has the 2nd pole since DohaGP with a record lap at the Red Bull Ring, the first to go below 1 minute 22 seconds (1:22,994s). Fabio Quartararo achieved a better result, but due to the Yamaha driver running over the track limit, the result was not recognized, but he still started the first row. The race was exciting from the departure when Joan Mir, Maverick Vinales and Marc Marquez in turn all started well to compete in the first group. However, in the 3rd race in a row at the Red Bull Ring, the red flag had to go up due to a serious accident on corner 3.

Pedrosa on the return day had an accident while exiting the 3rd round and then another veteran Aprilia driver, Lorenzo Savadori, crashed into Pedrosa’s KTM unwillingly due to out of sight. The two cars immediately caught fire due to a gas leak, fortunately neither Pedrosa nor Savadori suffered serious injuries.

The race had to be paused for more than 30 minutes for the track staff to clean up and start again with the original starting position. However, this time Mir still had a good departure, with Jack Miller rising to the top of the race. Behind Marquez, there was a second collision with Aleix Espargaro, causing both of them to be greatly affected to their positions.

Miller only led nearly 2 laps before giving up the main “stage” for Mir and Martin to compete for 1st place in the next laps. Quartararo leads group 2 which includes both Miller and Johann Zarco of Ducati. Vinales encountered an error in the warm-up lap causing him to fall to the bottom of the race and lose all hope of podium this stage. 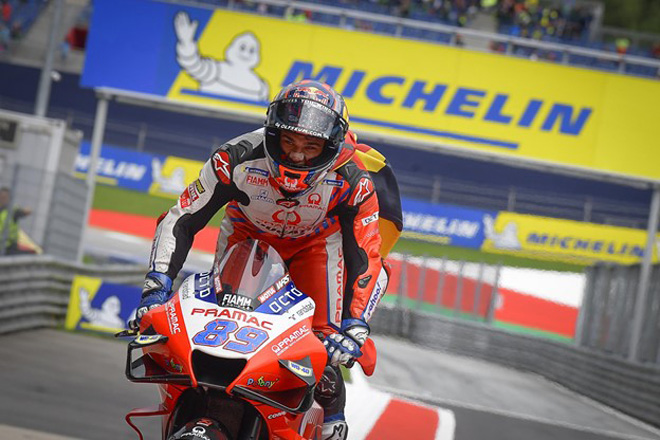 Rookie Martin took the lead while the defending champion Mir was close behind, although the Ducati steering wheel did not seem awkward but still had fast and stable laps. Attacking diligently but the opponent still proved to be too excellent, Mir made a mistake by himself when the race was 5 laps more to end and had to arrange for 2nd place at Styrian GP 2021, winning the 4th podium, also is the best achievement of the Suzuki driver this season. Quartararo ranked 3rd but the stone increased the gap on the individual rankings to 40 points, because Zarco and Bagnaia ranked 6th and 11th respectively.

This is only the 6th race in the MotoGP format for Martin, but he had a surprising but well-deserved first victory. He helped Pramac Ducati have its first historic victory, the second year in a row MotoGP saw an independent racing team take the throne at the Red Bull Ring. Behind, the last round effort helped Brad Binder to finish 4th, followed by Takkaki Nakagami (Honda). The last four places in the top 10 went to the Spanish drivers, Alex Rins, the Marquez brothers and Pedrosa respectively, a positive result in the return leg and after this early crash. 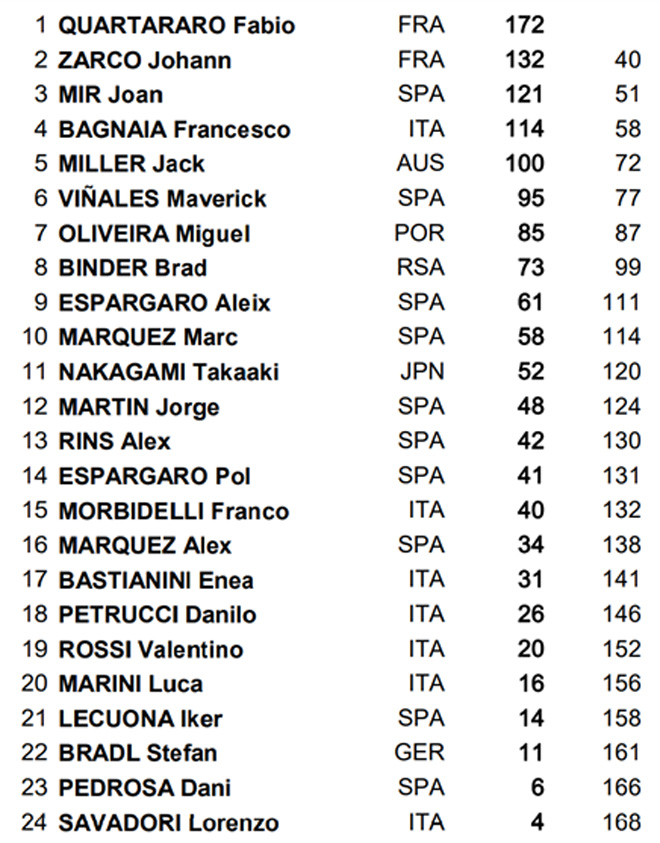