(MotoGP racing news) An emotional race that ended in all 3 formats with a twist in the championship race. At MotoGP it was a 1-2 victory for Honda, the farewell of the legendary Valentino Rossi to the home audience and above all, the first championship for Fabio Quartararo.

Moto3: Foggia won from P14, the gap on the rankings is only 21 points

Sergio Garcia missed the second stage in a row due to injury, officially no longer having the opportunity to win the Moto3 championship this season. Meanwhile, Dennis Foggia only started 14th, this is a great opportunity for rookie Pedro Acosta to increase the gap in the individual rankings with opponents from 4th place.

However, the race did not go as expected for driver #37 as he struggled to maintain his position in the top.

In contrast, Foggia proved fierce from the first minutes and improved the rankings quickly. The determination helped him rise to the top in lap 15 and excellently preserved his rank until the end of the race. Since then, the Italian driver has won all 3 victories in Italy this year (Mugello, Misano 1 and Misano 2).

With the 5th victory, also the 6th podium in a row, Foggia shortened the gap on the individual rankings to only 21 points.

Jaume Masia has his third podium this season, his first in nine races since the Italian GP at Mugello. This achievement helped him rise to 4th place in the rankings. Acosta took a risk in the decisive round to win the important podium, while helping Red Bull KTM Ajo to win the Moto3 team championship in 2021.

Darryn Binder, the driver will “jump” to race at MotoGP in 2022, finishing 4th.

Rookie #25 had a good start to soon rise to the top, while Gardner had more difficulties, even collided with Somkiat Chantra and was punished for running Long Lap. However, only 30 seconds after the penalty decision was made, R.Fernandez suddenly had an accident at the end of the straight line, causing his car to “cheat”, and was disqualified while leading. He “throws away” a great opportunity to take first place in the personal rankings and has many disadvantages in the remaining 2 stages.

Fortunately for R.Fernandez, his teammates did not have a good performance and only finished 7th, increasing the gap to 18 points.

Taking advantage of the opponent’s mistake, Lowes, even though he did not have the most perfect race, still got the final victory. This is the third win, but the first since Qatar earlier this year. Teammate Augusto Fernandez, who started 3rd, had to receive a Long Lap penalty but won 2nd overall thanks to a pass in the last corner against Aron Canet, who won the 5th podium in 2021.

Sky VR46 had a race to pay tribute to the legendary Valentino Rossi, but they were disappointed when Celestino Vietti finished 4th, and Marco Bezzecchi made a mistake and had to give up.

MotoGP: Ducati stumbles, the championship has been won 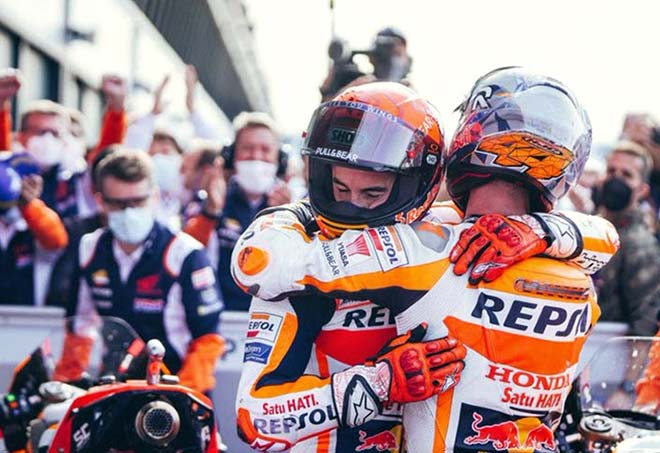 Repsol Honda has its first 1-2 win in 4 years

Francesco Bagnaia won the 4th pole in a row in the race where Fabio Quartararo has the first chance to win the championship in 2021. The French driver will have a difficult race when starting from 15th place.

The Italian driver got what he needed, it was a good departure to keep the 1st position with his teammate Jack Miller ranked 2nd, followed by Marc Marquez, who is capable of bringing many difficulties to the Ducati duo. Behind Quartararo there are slow and steady advances, waiting for the opponents to make mistakes.

Difficulties increased for Ducati when Miller made a mistake and dropped out of the race in lap 5. Thanks to that, handlebar #93 rose to 2nd, recreating the fight in Aragon between Bagnaia and Marquez at the top.

Both have different tire combinations: Hard-Medium for Bagnaia and Medium-Soft for Marquez. Behind, Quartararo entered the top 10 in lap 8, and shows no signs of stopping when running faster than the drivers above. Steady speed and confidence helped driver #20 rise to 5th in lap 20, also the highest he could achieve at this stage when the gap with the top person could hardly be leveled. Bagnaia still kept a cool head and gradually increased the distance with Marquez in the last 5 rounds. But at the same time, the unexpected happened, Bagnaia slipped off the track right at the corner Miller made a mistake at the beginning of the race.

Driver #63 was bitterly eliminated and the championship officially belonged to Quartararo, regardless of his performance in this stage. He still wants to celebrate the first historic championship for a French driver at MotoGP on podium.

However, Enea Bastianini’s determination helped Ducati rookie to have the 2nd podium at Misano this season, despite starting 16th. Repsol Honda won a surprise 1-2 victory, the first time for this racing team. since Aragon GP 2017.

Marquez has his second and third consecutive wins of the season, and teammate Pol Espargaro has his first podium since Valencia 2020. Rossi finished the last race of his career at home to Misano in 10th place, and had emotional goodbye to fans. The champion of the 2021 season revealed

Quartararo finished 4th and had his first moment as the 2021 MotoGP world champion. He celebrated with the members of the Yamaha racing team and shed tears as he looked back on his experience in previous seasons as well as in 2021. A well-deserved title, giving Yamaha its first individual championship since Jorge Lorenzo 2015. (Sports news, MotoGP racing news) Marc Marquez was undefeated every time he went to the COTA racetrack in the period 2013-2018 before suffering a…