(Sports news, tennis news) Last week Trinh Linh Giang cried after his victory over Ly Hoang Nam. He could not hide his emotions before his “historic” moment, and confidently headed for a new goal in the future.

Tennis in Vietnam last week saw a big shock when for the first time in eight years, No. 1 player Ly Hoang Nam received a defeat in a domestic match. Even more surprised when it was before Trinh Linh Giang, the player just returned to play after 2 months and was a fairly familiar defeat by Hoang Nam in most of the previous encounters.

However, in the afternoon of November 29, Linh Giang played as if this was not only the final match of the VTF Masters 500-2 tournament, but also the “final” match of his career. He choked the tie-break in the first set and completely overwhelmed Hoang Nam in set 3 with a score of 6-1 to win the championship.

Strong on the football field but Linh Giang could not control his happiness. He bursts with emotions and sobs in the hugs of relatives and congratulations from his opponent. 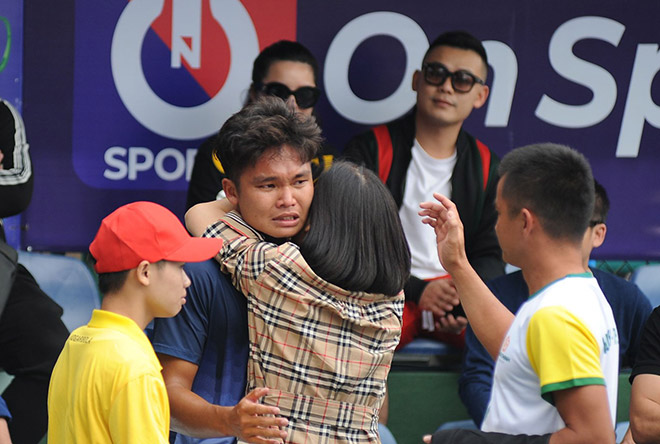 Recalling about his tears, the 23-year-old player shared: “I have many opponents that I want to overcome, including Hoang Nam. He is also a prop to push me to improve. I often have a fear, that is, not being able to overcome myself. But in this match I got through “.

“This tear is the happiness that my comeback efforts during the past time have been successful beyond my expectations. I won against Hoang Nam and above all, won against myself. Can’t think about anything, only tears of happiness “, Linh Giang revealed.

After a successful tournament, Linh Giang rewarded herself for a few days to rest before returning to practice for the new season. He did not hesitate to share his goal of conquering the men’s singles medal at the 31st SEA Games held in Vietnam next year. “SEA Games is an arena where sports athletes always want to play and win medals. I will work hard to maintain the national record. I hope the ATP tournaments will return to play internationally. My goal in 2021 is to win a medal in the SEA Games men’s singles singles. I will try my best for that “, Linh Giang revealed.