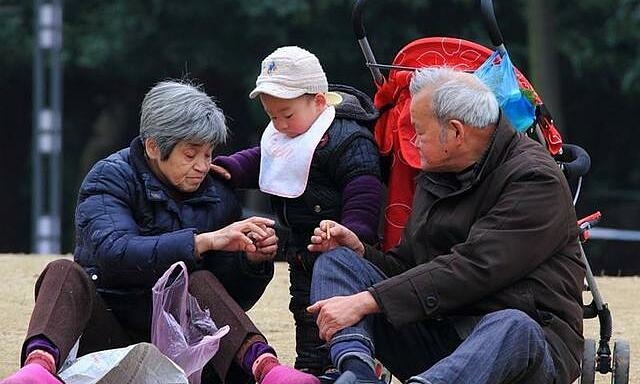 Many people complain when parents on both sides do not help them look after the baby, even thinking that it is their grandparents’ responsibility to their grandchildren.

In fact, whether to rely on elderly parents to look after their children is a controversial story. Parents feel a lot more secure when entrusting their children to grandparents, but in fact, the elderly themselves will also face difficult problems that sometimes you do not know.

Thanks to grandparents looking after grandchildren is forcing them to live a “repetitive, repetitive” life. Grandparents are the ones who have gone through the strenuous youth of raising their children. By the time their son was chief, they entered retirement age, in weak health, and limited income. At this age, the elderly should rest and relax. Depending on their economic conditions, they can travel, make time for their own hobbies such as joining clubs for the elderly, planting trees, taking care of pets …

When you hand over your children to them, you deprive them of their freedom. Wishing to protect their children, or thinking that “you can save any money”, grandparents voluntarily “put up” all personal desires to spend time with them. After sacrificing themselves for their children, now they must continue to sacrifice for her. They are forced to live one stage of their lives again and again.

Readers of Aboluowang, China, have had fierce debates around this topic. Some opinions suggest that taking care of grandchildren is also the joy of their grandparents, not entirely the responsibility. Opposing that, many people consider taking care of young children as a difficult job, requiring not only health, but also knowledge. The “phase difference” in the parenting perspective between the previous generation and this generation can become a source of conflict in the family. So, instead of letting grandparents take care of grandchildren, they should actively send their children to school, or hire suitable nannies. Relying on parents’ compassion to make them look after the baby is “filial”.

Asian culture values ​​the values ​​of the elderly in the family, unintentionally also pressures them, when imposing the responsibility to care for the next generation, to provide economic support to their children if possible, must help look after the baby …

In fact, everyone has a life of their own. When you are born, you should have financial and healthy preparation to ensure that you can take care of your child well, instead of relying on old parents. Many people think that when parents retire as “free”, “nothing to do” … should try to take advantage. Even many people rely on the kindness of their parents and leave their children to them, not even taking care of them day and night, because of the idea of ​​”having grandparents worry”. This is completely false and selfish.

The formation and development of social thinking is which cannot be changed in a short time, but each person still has to work hard to change this concept. Each young or old individual has the right to choose his or her life instead of being constrained by social prejudices. How old people live after retirement is something that they need to respect and make their own decisions about.

Taking care of a child is tiring, especially if you have more than one child. The pressure put on grandparents’ shoulders is great. Therefore, you should proactively grasp the health of your grandparents, at the same time bring them to visit and treat … if you find out they have health problems. You should also consider the age factor of your parents, are they young enough to help you? The answer is extremely important.

During child care, you also need to remember that if you rely on grandparents, Should only send grandparents a certain time frame, then, need to “set them free” for them to rest. Letting go, letting children stay with old grandparents regardless of day and night, leaving them no longer private space is really an irresponsible way, eroding the health of the elderly.

Can you talk to grandparents about how to take care of and raise children?

Conflict can arise and hurt both sides, due to the difference in views on child rearing and care. Therefore, to avoid this “out of phase”, you should proactively talk to your grandparents about how to take care of your grandchild and show them your wishes, ideas and plans. If you have been relying on your grandparents to look after your grandchildren, you should be soft, listen and be attentive, instead of insisting on keeping your own point of view and ignoring what they say. Not being respected can reduce their enthusiasm and desire for support.

You should be subtle in money matters

Of course, not all grandparents will take money to look after the grandchild, but they have the same rights – because they look after your baby.

One way or another, you can send gifts, send a small amount of money … for your grandparents to spend, especially in case they are not economically abundant. This approach helps grandparents to be more active and comfortable financially, at an age that is no longer the same. For those who are determined not to take money from their children – out of love for their children – you can buy gifts, buy things … so that they feel your concern and appreciation.