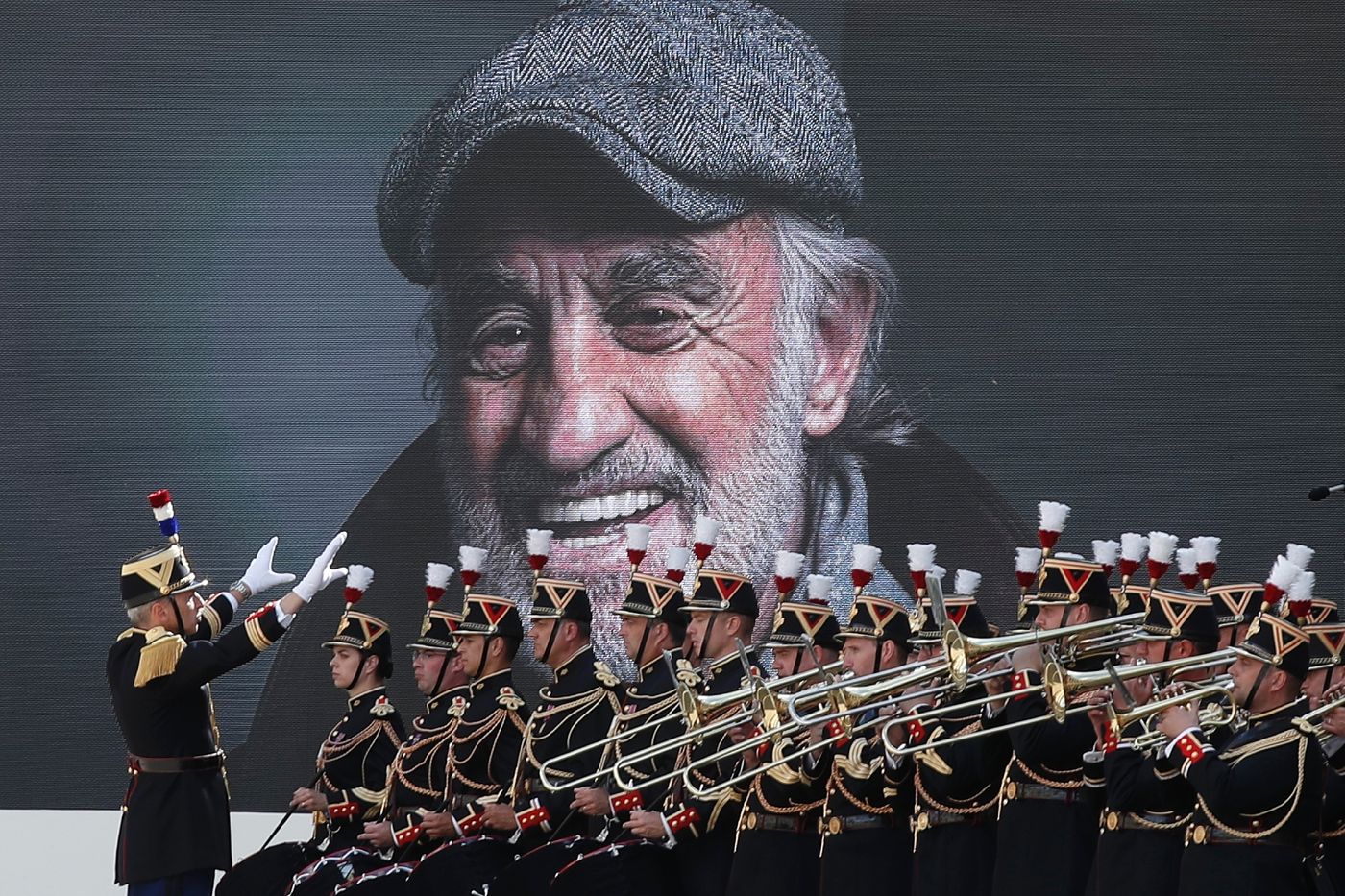 “ Our grandfather radiates everywhere and all the time », Proclaims Victor Belmondo, the grandson of Jean-Paul Belmondo. He also an actor, he represented the clan of the deceased in a poignant speech, a last tribute to the one he considered “ a sun “-“ It does not go out, it is eternal », He launched.

The tribute ceremony to Belmondo was held this Thursday, September 9, in the courtyard of the Invalides, in Paris. Emmanuel Macron chaired it. His solemn speech evoked a mythology around the life of the actor, that ” of a happy France, carefree times “But above all, that of a man who” was family “. The coffin was carried by the members of the National Guard under the violins and drums of the orchestra which resounded throughout the enclosure of the Invalides. A very moving resumption of the main theme of the Professional, composed by Ennio Morricone in 1981, was performed.

→ PORTRAIT.Death of Jean-Paul Belmondo: return on the itinerary of a spoiled actor

Nearly 700 personalities from culture, sport, politics, but also a thousand anonymous people gathered. Among them, Laurent. At 56, this fan has had the opportunity to meet his idol several times: “He was adorable. His kindness was mind-blowing. I shared some nice moments with him. He’s part of my life and everyone’s here. For most of these people, the question did not arise, it was necessary to come to pay homage to the one they consider to be the greatest French actor.

The model of a whole generation

Jean Dujardin, Guillaume Canet, Gilles Lellouche, Richard Anconina. They all came, their faces closed but their eyes sparkling when they spoke of “their” Bébel, so well did they know what he brought them. “It was my idol, admits Guillaume Canet. I remember when I was young I used to go to the hairdresser with the poster of Professional to request the same cut. »Jean Dujardin also wanted to be like him,« like everyone He says, and he ended up doing it. For many, Jean Dujardin today embodies what Belmondo could have been in his time, and it is perhaps not for nothing: “ In my life as a man, I have often wondered how Jean-Paul would react to make certain important decisions.. “

Belmondo: a life in seven films and a play

Belmondo was a real reference for all these actors. Without fuss and no sense of superiority, he helped the following generations to become known a lot and accompanied them. ” In addition to having aroused immense recognition and inspiration towards the next generation, he somehow passed the torch to them, as Jean Gabin had passed to him in his time. », Analyzes producer Alain Terzian, also present.

Whether they were actors or not, all these artists had been able at one time or another to realize his good nature. Philippe Candeloro remembers the feast of Belmondo’s 83 years, his only meeting with him: “ We did a skating show on a medley of all the music from his films. It was an honor to play for him. “

Patrick Bruel, he wishes to salute the joy he represented in the eyes of the French: “ Ithere are few people who are so unanimous He admits.

The funeral procession left the Invalides to the uninterrupted applause of the 1,700 people present but “ the long enchanted moment of French cinema », As described by the President of the Republic, was not yet quite finished, because a popular tribute followed the official ceremony. Passers-by were able to gather at the Invalides throughout the evening for a final farewell to Jean-Paul Belmondo.

The funeral will take place Friday, September 10 in the strictest privacy.