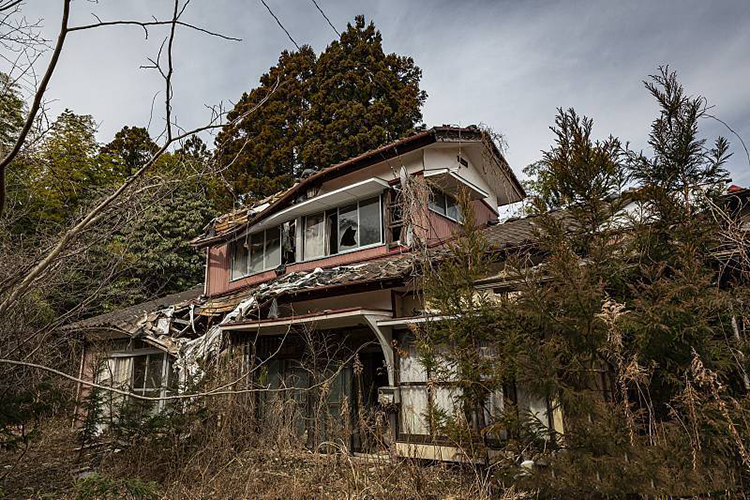 Shoji Kawashima of Higashimurayama, a suburb of Tokyo, once had trouble with the old house his parents left behind.

In 2014, his parents died, leaving behind the house, which is more than 60 years old, located on the main road of the city, but most of the exterior brick has fallen off, which could collapse if there is an earthquake. It became Kawashima’s concern because he had a house in the city and didn’t know how to deal with it.

Kawashima’s concern is also a problem that has plagued the Japanese government for 20 years. The countryside with millions of houses abandoned when the population plummeted, creating a desolate landscape, many people called “haunted houses”.

The Housing and Land Survey conducted by the Statistics Office of Japan in 2018 showed that since 1973, the total number of houses in the country has outnumbered households and the vacancy rate is 5.5%. By 2018, this number increased to 13.6%, which means 54 million households but there are 62.41 million homes.

According to a forecast by Nomura Research Institute, Japan’s largest economic research and consulting firm, if this trend continues, by 2038, more than 30% of the country’s housing will be abandoned, and by 20 By 2040, the vacant area will be equivalent to Hokkaido, Japan’s second largest island.

Since the end of World War II, Japan’s economic and housing boom has maintained a unified rhythm.

Forty years after the war, the Japanese economy developed rapidly, and the government also introduced a number of preferential policies to cut taxes on residential land. Young people at that time, after finding a job, rushed to work like warriors, with a steady increase in salary. Many people go to the suburbs to buy more houses and accumulate, because they think that “land always has to increase in price”.

In the 90s of the last century, real estate prices fell into stagnation with the collapse of the bubble economy.

Suburban real estate fell into decline. The kids move to the city and stay here to work when they grow up. As reported by Atlantic Monthly (USA), for decades, Japanese people have moved from the countryside to the city. Small towns on the verge of collapse. In 1950, only 53% of the population lived in urban areas, by 2014 this number had risen to 93%. Rural real estate is constantly depreciating and no one cares.

In 2009, Japan’s population peaked at 128.5 million, then declined at a rate of 200,000 per year. Land in the countryside is cheap and the younger generation, who have inherited large houses, do not want to spend large sums of money on maintenance. Since then, more and more uninhabited “ghost houses” have appeared.

Abandoned houses are gradually becoming a potential danger to the local community.

Weeds that grow indiscriminately are a haven for pests. Leaves scattered on the road can cause trouble for neighbors. The dilapidated buildings are the residence of termites, cockroaches, then the degraded houses are demolished, partially collapsed. This is also a place that can cause crimes such as illegal entry, dumping or arson.

If the local authority wants to demolish, it is imperative to contact the living heirs of the house. This step is extremely time consuming, as the heir is likely to live in another region, even abroad. At the same time, the inheritance registration procedure is also very complicated.

Even when the inheritance registration is completed, the trouble is not over. For the homeowner, the “haunted houses” are left with only old furniture. People often don’t want to waste time and energy cleaning, let alone spend money renovating a home that can’t be rented or sold. Moreover, the tax on vacant land is “hit” 6 times higher than land for housing construction. No one is willing to shell out a million yen in demolition fees for six times the tax.

To prevent an increase in “ghost houses”, Japan has implemented policy reforms. In 2014, “Law on measures to handle abandoned houses” was promulgated. Under this law, empty homes that are at risk of collapsing or causing sanitation problems are no longer subject to high taxes. The law also allows local authorities to guide homeowners, renovate and use flexible homes. In April this year, the house inheritance law was also simplified.

However, this policy did not attract everyone’s attention. According to the “National Survey of Home Owners” conducted by real estate company Kachitasu in August this year, 76.8% of owners said they were unaware of the mandatory registration of inheritance and 66.7 % said never discussed this issue with family members.

However, Covid-19 has brought some “haunted houses” back to life.

According to a report by the economic magazine Toyo Keizai, since the outbreak of Covid-19 in early 2020, the number of people working from home has increased rapidly, the home space has been compressed, and children have caused “language problems.” noisy” with neighbors. The decline in economic capacity increases the debt burden if buying a city house. People started thinking about moving to the suburbs, the countryside to live in the house left by their parents.

On-Co, a real estate company in eastern Japan, has opened a new service, helping people in need to find and renovate “haunted houses”.

“The first thing we do is find out what the customer wants, then we will advise and renovate the home for the owner.” Mizutani Takeshi, the company’s president said.

To prevent the house full of memories from being abandoned, Shoji Kawashima turned to a local design construction company, hoping to rent it out after repairs. The company transformed Shoji Kawashima’s “haunted house” into a small restaurant with three main rooms, a gallery, a reading room, and a room equipped with a kitchen and garden, where people can rest and enjoy themselves. food food.

Looking at the children walking in the garden, Kawashima seems to see his past: “It is fortunate that we preserve the memories and love of our homeland by protecting the architecture.”

Ito Kenichi, who owns another “haunted house” in Kamakura City, does the same thing as Kawashima.

In March of this year, Ito quit his job at the company. After that, he turned his “haunted house” into a shared office, so that everyone could work during the epidemic, and regularly held different workshops, such as making mobile phone cases using cherry peel or strawberry party…

“Due to the epidemic, I rethink the value of communication. Therefore, I opened the door of the house so that people could gather and talk every day,” he said.