(F1 racing news) Another wet race takes place at Turkish GP 2021 and Mercedes continues to be the team that shows class. Valtteri Bottas won his 10th career win. Red Bull in the Honda gratitude race also excelled with Bottas on the podium and at the same time brought Verstappen to the top of the rankings.

Video of the official race at Turkish GP 2021:

The weather continued to not favor the riders as dark clouds followed the rain that showed no signs of stopping as the race was about to begin. The championship this time cannot be determined here like last year. From 11th place, can Hamilton preserve the lead? The defending champion has won from 14th place in Germany in 2018.

And as expected, all will start with Intermediate tires. But can conditions get better and switch to slick tires like at the 2020 race? Bottas has started the warm-up round, the splash will greatly affect the starting phase that follows. This condition will last throughout the race, AlphaTauri racing team confirmed.

Bottas and Verstappen to the starting position. Two riders with a clear path and least affected by splashes stop, wait for the other rider and signal to start.

Chaos at Round 1 Istanbul Park

As usual in pole races, driver #77 successfully defended the lead with a good start. Pérez found his way up to 4th place. Alonso collided with Gasly, was pushed off the track and fell to 17th. Lafiti also slipped on the road but was able to continue the game. race. Round 2, Hamilton took 9th place from Vettel. Alonso then also had a collision with Schumacher in the back. Both collisions were investigated immediately and Gasly and Alonso both received penalties for two situations respectively.

Round 5, Verstappen encountered a gearbox problem, but the technical team did not show any concern., the distance with Bottas now is 1.5 seconds. While Hamilton struggled with rookie Tsunoda blocking the way, Sainz moved up to 14th place, and Ricciardo reached 16th. Round 8, Hamilton overtook Tsunoda outside the third corner after much effort. Sainz overcame the Alfa Romeo couple and reached 11th place. Even in the next round, also at the third round, Stroll became Hamilton’s next “victim”. McLaren is not a rival to Mercerdes in a straight line

Round 12, Norris seemed to continue to make it difficult for the defending champion, but this time it was relatively easy for him. McLaren racer to pass right before turn 12. The track was drier, but still not dry enough for slippery tyres. Sainz, after passing Ocon, continued to overtake Vettel, but there was a slight collision between the two riders.

Without waiting for the first pit turn, Hamilton beat Gasly, and continued on round 12, back in the top 5 with tougher opponents ahead. Round 18, Sainz overtook Tsuonda, and with Leclerc now in 3rd place, while only 1 McLaren is in the top 10, things are going well for Ferrari. Hamilton halved the distance to Pérez and won the fastest lap consecutively.

Round 23, Ricciardo entered the pit, changed to a newer Intermediate tire and the entire paddock area will pay attention to the Australian driver’s speed. Tsunoda has slipped out, dropped out of the top 10, lost 3 places and possibly even a chance to win points in today’s race. Round 25, the leading group was able to catch the round, in the midst of Haas’s “internal” battle. Sainz only wants 1 pit for this race, but smooth tires or Intermediate is the right choice. Round 29, Hamilton was stopped by Mazepin on his way to chase Pérez. Maybe this will become an important factor affecting the final result of the race. To get back to podium, Hamilton probably needs heavy rain or a significantly dry track. The defending champion, if he can overcome Pérez, still has a 12-second gap to Leclerc.

Round 32, Alonso entered the pit, and stopped for 5 seconds due to a collision with Schumacher. Changed to new Intermediate tires and returned to 18th. Round 35, Pérez had a great defense against Hamilton, was forced out of the track by the pit-lane entrance, though eventually continued on. In the lead after the 1st turn. Round 37, Norris entered the pit and followed by Verstappen, Sainz, Tsunoda and Russell also changed into new Intermediate tires. 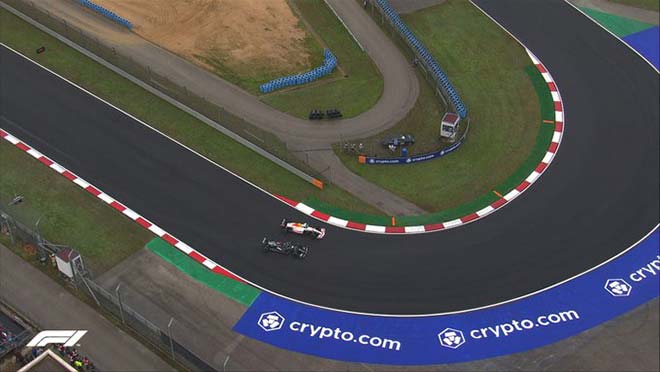 Vettel and Aston Martin meanwhile made the unexpected decision to change to Medium tires. Immediately, the yellow flag appeared, when his car seemed to run on ice, constantly swerving. It was a wrong decision by Aston Martin. On the way to the pit, the German driver also almost collided with the pit wall. The law mandating the use of two different tires applies only in dry conditions. And Leclerc and Hamilton look set to bet and continue until the end of the race. Hamilton leads Pérez 14.9 seconds, but in these conditions will not be able to catch Verstappen.

Round 47, Leclerc’s bet failed and Bottas returned to lead the race. Sainz reached 8th place after surpassing Ocon. Leclerc went into the pit at the end of the lap, changed to a newer Intermediate tire, and returned to 4th place. Bottas rises to the top of Turkish GP

A dark cloud was noticed by Mercerdes and they did not want Hamilton to face the same situation in Russia. Round 51, Hamilton entered the pit and came back behind Leclerc and Pérez. The defending champion was not pleased with that decision as Pérez took the last place on the podium. Ocon is trying to keep the strategy of not going to the pit to be successful to keep 1 point before Ricciardo is struggling with the tire right behind.

Hamilton while trying to chase Leclerc and frustrated, Gasly and Norris have been following since. Bottas won the fastest lap. Although Mercerdes’ dominance is shown here, taking the remaining 2 positions on the podium is also a satisfactory result for Red Bull. Ricciardo fell behind the Alfa Romeo duo due to not being able to see what was going on behind. Bottas crossed the line, scored the fastest lap in the deciding round and became the winner of the Turkish GP, giving him his 10th career win. The Red Bull duo appeared on the podium. Leclerc finished 4th and Hamilton 5th.

Gasly 6th, Norris 7th. The best driver of the race (as voted by fans) Sainz finished 8th. And Stroll and Ocon were the remaining names in the top 10, the French driver only used 1 set of tires throughout the race. 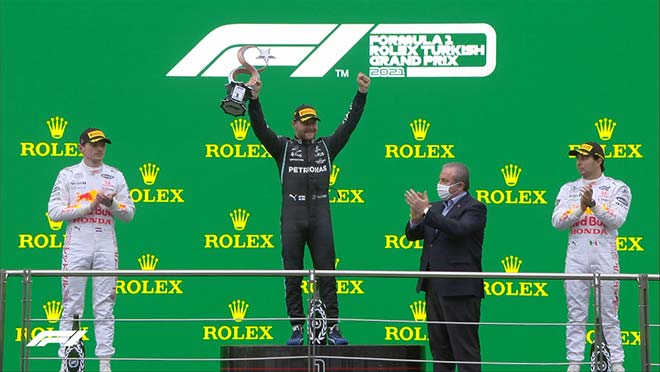 Verstappen left Turkey with a 6 point lead in the rankings. While Hamilton was not very happy with the team’s decision. Closing all the events at Turkish GP, the drivers will have time to rest before going to the Americas triple-header, starting in Austin, Texas, USA. Watch Formula 1 Aramco United States Grand Prix 2021 taking place from October 22-24. 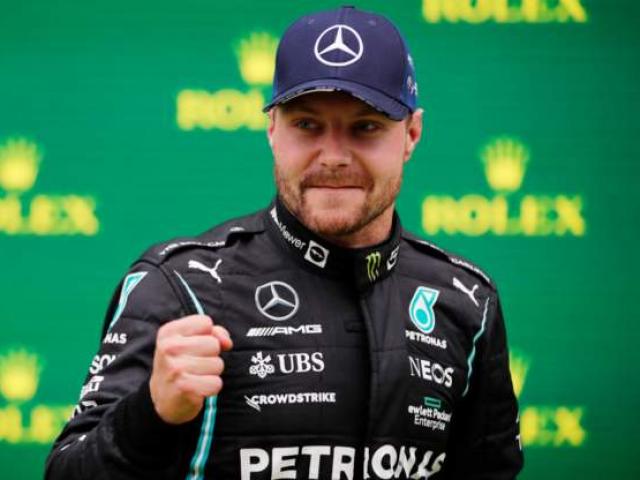