(Sports news, F1 racing news) The race between Lewis Hamilton and Max Verstappen will be the epic battle of the season and Algarve race, Portugal is the place where the ‘episode 3’ of this war will take place. As expected, they were the fastest on Friday, with the first two sessions where Mercedes had an advantage.

Valtteri Bottas and Max Verstappen took turns taking the lead throughout the FP1 run, but in the end the Finnish driver took 1st place. On Soft tires for the last 20 minutes, Bottas completed a round of field. Portimao racing with a record of 1 minute 19,648 seconds. Verstappen is only 0.025 seconds behind on the upgraded RB16B, but he feels that this new version is more difficult to handle and has instability problems due to the brake locking the wheel.

Mercedes took the advantage after its first day in Portugal

Hamilton ranked 5th, losing 0.3s to his teammate and slower than Charles Leclerc (Ferrari) in 4th, who also had a relatively successful Portuguese GP 2020 race and Sergio Perez (Red Bull) in third when He experimented with new components for the RB16B. 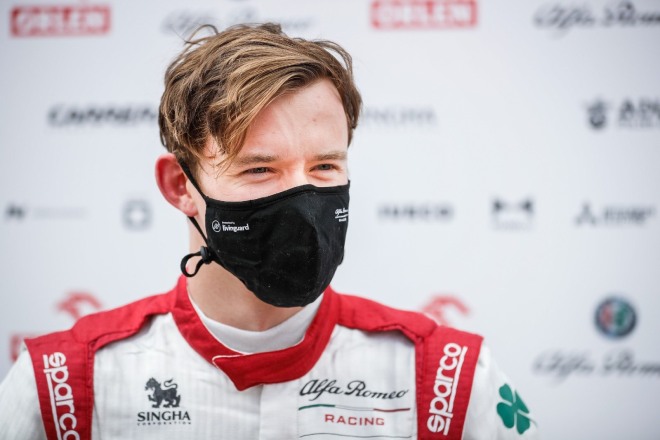 Ilott made his debut at FP1 for Alfa Romeo

Also at FP1, the defending Formula 2 2020 runner-up Callum Ilott had the opportunity to reunite his old rivals on the F1 track when he was given the first chance at Alfa Romeo, replacing Antonio Giovinazzi. After a missed appointment at the end of last year, the young British driver was finally officially introduced to F1 racing, shortly after becoming the official substitute driver of Alfa Romeo.

He had very positive results in his first run, ranked 17th after 21 rounds and only behind the “snowman” Kimi Raikkonen about 0.4s in the 15th place.

FP2: The Hamilton-Verstappen duo leads the way, a good sign for Ferrari

The weather at the beginning of the FP2 was very severe when the temperature was high, wind speeds were up to 30 km / h around the track. Even the run was pushed back starting 10 minutes slower than scheduled to repair a manhole cover on a broken track. Then, overcoming all the above challenges, champion Hamilton had the fastest track on FP2 – 1 minute 19,837 seconds – slower than Bottas’s run at FP1. Ferrari resulted in only losing to Mercedes and Red Bull

Like the morning run, Verstappen finished Monday after having problems related to the indirect brake system (by wire). The distance between him and Hamilton is 0.143 seconds and both teams show that they are very well balanced. Bottas has a bad run, but still enough to give him 3rd place. Meanwhile, Sainz is only 0.016s behind Bottas at 4th place, promising Ferrari will be able to have another good result in the race. this.

However, the most impressive performance on Friday included the Alpine team when the main drivers Fernandon Alonso and Ocon suddenly took the 5th and 6th place. Perhaps the A521 design is suitable for this racetrack and They hope to continue this for the next two important days.

Leclerc is slower than teammate – Sainz and only 7th and McLaren is still not performing well on Friday when Daniel Ricciardo is ranked 8 while Norris is only 12th. Much work to be done before entering 7th runs. Lance Stroll is ninth for Aston Martin and Sebastian Vettel is still having trouble adapting to the AMR21, he is 15th. Perez has only a tenth fast track that is disappointing. Another name, AlphaTauri, also “lost” in the top 10, with Gasly having its first leg in the lower half of the race in one run this season.

As such, Mercedes has ‘won’ in the first two test sessions, but their long-run results for the main race are not so excellent compared to Red Bull. Things are still ahead for the grading day, where the first ever F1 driver in history can be seen making his career 100th pole. 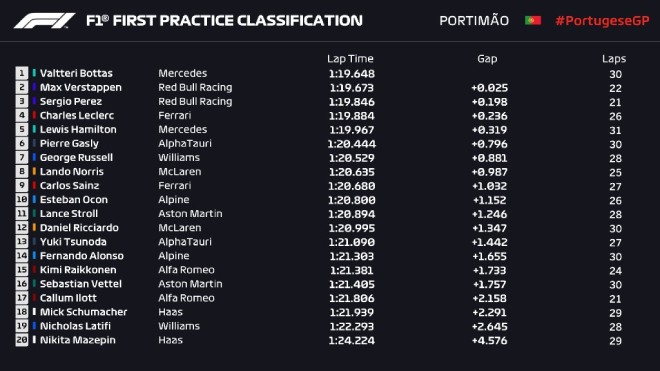