(Sports news, F1 news) After the opening race in Bahrain, the F1 team immediately moved to Europe. They have two weeks to transport hundreds of tons of equipment, motorbikes and tools so that we can continue to immerse ourselves in speed sports this weekend at Autodromo Enzo e Dino Ferrari – Italy.

Europe’s first class ranking race day once again proves the ultimate appeal of the speed sport of this season. The defending champion Lewis Hamilton struggled a lot, winning only once in the final qualifying round to win the Emilia Romagna GP race pole, which is also the racer ‘s first pole in the 2021 season. .

Returning to the main events of the grading day, the assigned tires for this race included Hard C2, Medium C3, and Soft C4 types.

Again to make it easy for readers to understand, Qualifying 1 (Q1) will take place in 18 minutes. At the end of this qualifying round, the 05 lowest achieving riders will be able to continue to the next qualifying round and will start the final in the order of achievement.

The signal lights turned on, but at the beginning of Q1, there was still no driver who immediately started as usual but was still in the pit lane. After all, the racing duo of Haas team took turns rolling first on the track. The first timed lap was performed by Schumacher with a record 1 minute 16 seconds 806 ‰, 1 second faster than teammate Nikita Mazepin.

Latifi, Verstappen and Perez also started their way to the track, but soon had to return to the pit lane because the red flag was on when driver Tsunoda slipped off the track at the Variante Alta corner, hitting the soft retaining wall with rubber tires. The rear wing and rear tire were all badly damaged, but fortunately the driver still did not have any problems. Observing in the pit-lane, many drivers were changed to a new soft tire by the technical team, only the Mercedes and Red Bull riders kept the same tires.

Red Bull racing driver Perez set his fastest lap one lap at 1 minute 15 seconds 744 ‰. Meanwhile Bottas got through shortly after, 1 second faster than Perez, faster than both Verstappen and Hamilton. In this run, Norris also surprised when pushing the rest back and temporarily ranked at No. 2.

Gasly was the latest runner who timed this lap but had his achievements deleted due to a Track Limit bug, but his next attempt was enough to put his name in 7th place. This leads to the cost that the soft tires will wear out and affect a lot on the official race day.

The next run and also the last run to identify the fastest person from category Q1. Still no driver has surpassed Bottas’s performance, so this racer is officially the fastest racer in the Q1 ranking round. Teammate Hamilton was +0,151 seconds slower, Lando Norris unexpectedly surpassed Verstappen to hold 3rd place and was only +0,337 seconds slower. Alpine’s Ocon rider did the same surprise by overcoming Red Bull’s Perez and finishing fifth.

Q1 ranking results (15 riders are allowed to continue in the Q2 ranking): 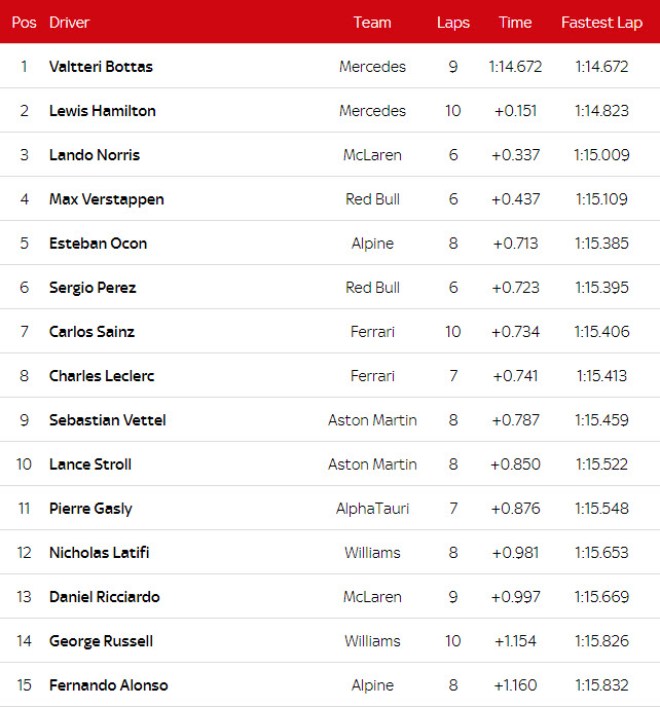 Entering the Q2 classification round, after the green light, the Mercedes driver duo appeared first with the Medium C3 tire set. Verstappen, Russell and Latifi followed suit and shared a choice of Medium C3 tires. In this run, driver Hamilton set the first record at 1 minute 14 seconds 817 ‰. However, Norris later made a surprise when he achieved 1 minute 14 seconds 718 ‰. 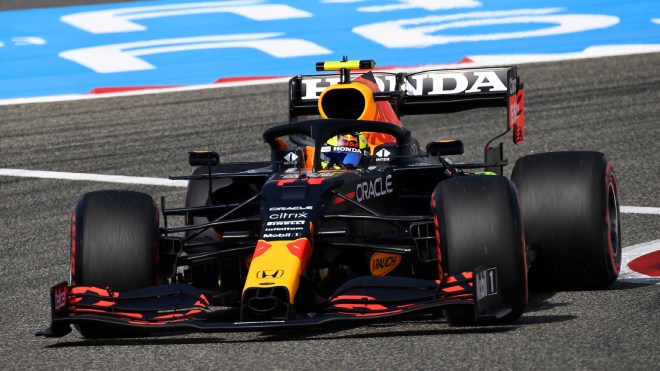 Perez fastest ranked round of Q2

At the next run and also the last run of this qualifying round, the top grouping was more surprising. The most surprising thing was that Perez overcame his teammate to 1 minute 14 seconds 716 ‰ and became the fastest driver in the Q2 qualifying round. The next surprise was that the racer Lando Norris in a trance race climbed to second place and was only +2 seconds slower. Ferrari racing team’s Leclerc does the same thing when it successfully takes 3rd place and is +92 ‰ seconds behind the top leader. The consequence of the previous “surprise” chain is that Hamilton, Verstappen, Bottas have the next 3 positions and are> 1 second slower than the leader. 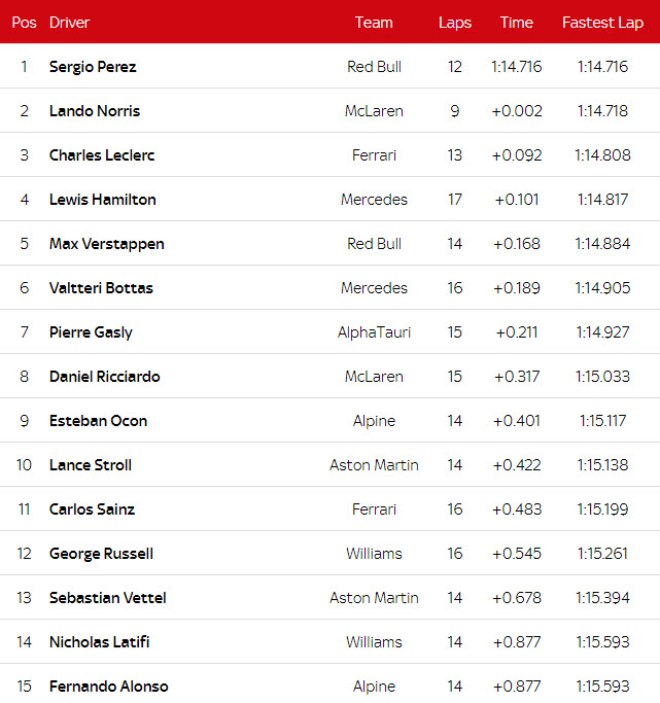 Soft C4 soft tires are the choice of all riders at the first start of the Q3 ranking round. The Norris driver was the first to set the record, but the fastest, temporarily, then was Mercedes’ Hamilton due to overtake Verstapppen, Perez, Leclerc and teammate Bottas respectively. Hamilton’s achievement in this run is 1 minute 14 seconds 411 ‰. At the end of this first run, riders Gasly took 7th place, just ahead of Ocon, Ricciardo and Stroll.

The second run is also the last run of the Q3 qualifying round, which is also the last run of the qualifying race day and determines the pole winner. Many drivers have improved performance, only Hamilton can not improve their own performance. However, fortunately, the improvement of the remaining riders was not enough to overcome the previous temporary fastest performance and Hamilton became the fastest, winning the Emilia Romagna GP 2021 race pole. 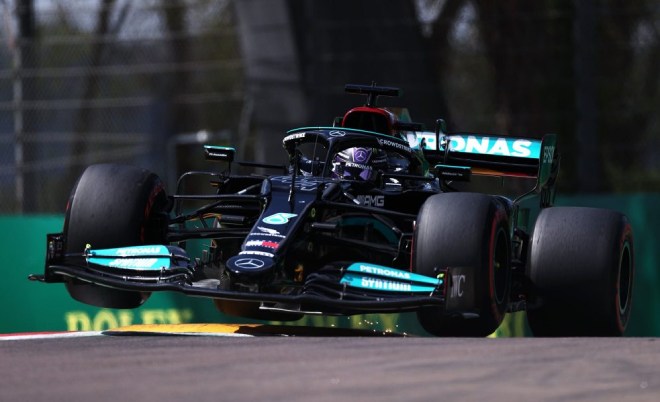 Hamilton was the fastest in the third qualifying round, winning the Pole of the Emilia Romagna GP 2021 race

Unfortunately for Norris racer, improving all 3 track segments but the result is deleted due to the Track Limit error, if this error is not involved, the second starting position is within reach. Driver Perez had a fantastic day of racing, after improving his performance he overcame his teammates and took second place on official race day (After Norris racer was removed result).

Not too prominent, not too loud, but Red Bull’s fourth starting spot right after Verstappen is an incentive for Ferrari driver Leclerc. With its journalistic running and suitable for the small track, many tight turns, the ability to make a surprise at Autodromo Enzo e Dino Ferrari is not too surprising for Leclerc.

Gasly has always been in the top 6 recently, and having a fifth starting place on the official race day shows that AlphaTauri is slowly gathering serious investment results for both the present and the future. . 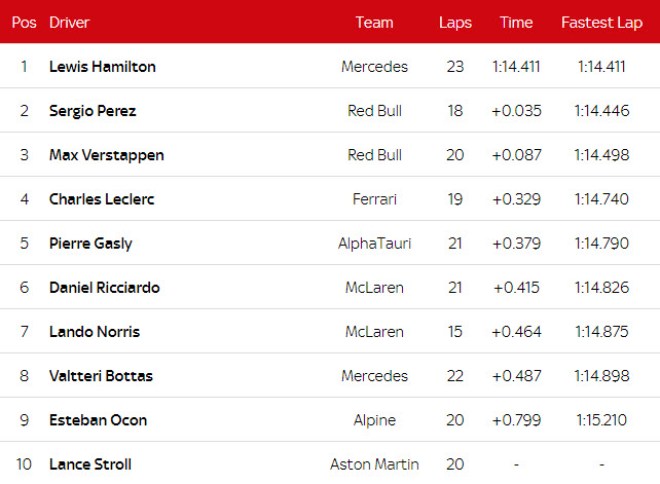 The achievement gap of the first group of riders increasingly shortened, even in the first group of 3 riders only 35 ‰ seconds apart and 87 ‰ seconds apart shows that the competition has entered the peak of fierce right away. from the first round. The difference with the next group in the top 6 has also significantly shortened to the top (only 0.3 seconds to 0.4 seconds on average), so they also have an immediate chance if any of the racers are above is wrong This is also a bright spot that will surely bring excitement to both the racers, the racing team and especially the dramatic, h65p recovery for fans at this race.

The Official Race Day of this race will take place from 8:00 p.m. on April 18, 2021 (Vietnam time). Fans can watch live on Fox Sport’s sports television system. 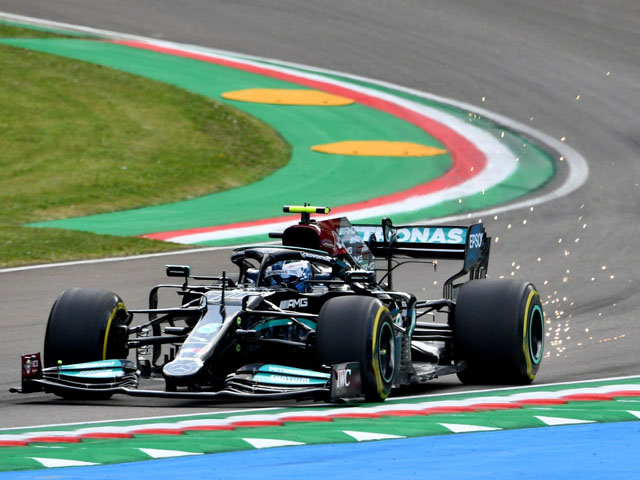