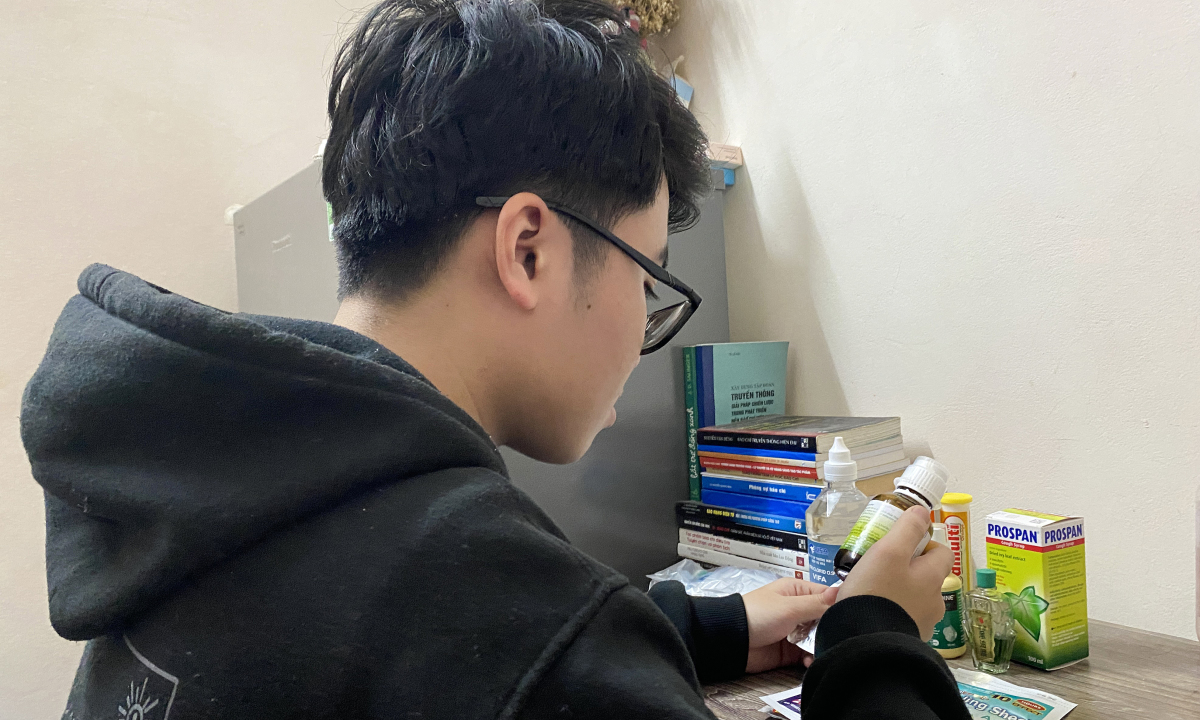 HanoiThe whole morning of February 23, Hoang Oanh’s phone continuously vibrated with dozens of messages conveying treatment experience and prescriptions that were confirmed “to drink and be cured”.

Although she was no longer afraid of Covid-19, when she knew that she had become F0, Oanh was still a little worried, so she asked about the experience of her friends who had been infected. “Whoever sent the application said it was prescribed by a ‘reputable doctor’. I didn’t know who to trust, so I asked to buy it all, it’s better to have a surplus than to miss out,” said a 37-year-old woman, residing in Cau Giay district, with quick test results. positive on February 23, said.

Oanh has a history of high blood pressure, had been vaccinated with the first dose but suffered from third-degree anaphylaxis and had to temporarily stop. She contacted the ward health center to ask for isolation, but was advised that the symptoms were only cough, fever and sore throat, so she should calmly monitor her health at home, if it gets worse, she will be hospitalized.

But Oanh said, still not reassured, should ask people to buy medicine according to the advice of friends who have recovered from Covid-19, from fever reducers, vitamins, throat sprays, antibiotics, anti-allergic drugs, anti-inflammatory drugs, anticoagulant, rehydration pack, radial interstitial, medrol, brain tonic,… to oxygen tank, Sp02 oxygen meter. All for nearly 5 million VND for more than 20 medicines and supporting machines.

From the day of the infection, Oanh began to participate in F0 treatment counseling groups at home. She said, under each post asking for advice on treatment of F0, hundreds of comments about treatment tips and prescriptions are advertised “having an acquaintance as a personal prescribing doctor”. Whenever anyone brags about having a cure, she takes pictures for reference, because she thinks good medicine will cure the disease.

According to a reporter’s survey VnExpressThere are hundreds of self-treatment groups on social networks at home, the largest group has nearly 300,000 members. Every day, the groups have from 4 to 10 articles on how to cure the disease and many articles advertising drugs to treat Covid-19 of unknown origin.

Doctor Truong Huu Khanh, former head of the Department of Infection – Neurology, Children’s Hospital 1, Ho Chi Minh City, said that the situation of F0 being lost in the “forest” of prescriptions floating on the market is a reality. According to the doctor, Covid-19 is a self-healing disease over time when vaccine coverage is wide, causing some people to think it’s thanks to drugs and then to propagate. In particular, F0 in Hanoi is mostly mild, with flu-like symptoms, infected people do not need to be too eager to buy, store or use floating drugs labeled “prevention and treatment of Covid-19”. someone censor.

But the “matrix” of prescriptions is not only rampant online, but also appearing in pharmacies. Thanh Hien, residing in Thanh Xuan district, spent more than one million dong on drugs under the advice of a pharmacist, after getting “two lines” on February 25.

Unable to contact the ward health station when the hotline was constantly busy, with a history of pneumonia, Hien went out to buy medicine by herself when the symptoms of body pain, headache and sore throat became more and more obvious.

“I was overwhelmed when I was offered dozens of varieties by the pharmacy, from cheap to high-end,” she said. According to the seller, Hien was advised to take special medicine packages, if only using common cough and cold medicines would have little effect. In addition, she was advised to buy more vitamins and functional foods to treat Covid-19. Hien accepted to buy 10 drugs according to the advice.

“After each meal, I take a bunch of medicines, from those that relieve cough and fever symptoms to functional foods with herbal extracts to prevent post-Covid-19.” She said that she was still full of drugs. headache, dizziness despite taking three days of medicine.

Medical experts recommend that F0 at home should not be abused if there are no indications. In fact, there are many cases of misuse of drugs, overdose of drugs causing poisoning, especially with antipyretic drugs paracetamol, anticoagulants, anti-inflammatory drugs containing corticosteroids…

And Mrs. Van Lan, 60 years old, from Thanh Hoa, believes in advice from social networks, saying that if you want to quickly cure Covid-19 you need to order a special treatment package worth nearly one million VND including anticoagulants, antibiotics, functional foods with Chinese characters and must be exposed to the sun every day to “kill the virus”. After a few days of taking medicine and being exposed to the sun under the weather of 8 degrees Celsius, Ms. Lan had a fever and her symptoms worsened.

“I tried to dissuade me many times, but my mother only trusted the advice of “bad doctors” and told everyone to do so,” said Mai Hong, Lan’s daughter, sighing.

In the face of the fact that many people with Covid-19 who are treated at home are confused with drug information, Director of Hanoi Department of Health Tran Thi Nhi Ha said that 96% of Hanoi F0 patients self-treat at home. Disseminate knowledge so that people can take care of their own health and that of their loved ones needs special attention.

In order not to become the prey of drug dealers, causing mild illness to become severe, most doctors recommend that people infected with Covid-19 treat themselves in a “symptomatic treatment”. In case medical facilities are overloaded, infected people can consult information at reliable and official websites of the Ministry of Health, hospitals or hotline numbers of the Department of Health.

“But the treatment instructions on the website of the Ministry of Health are too academic. The information shared is detailed but difficult to understand,” said Mr. Duc Nghia, 50 years old, in Cau Giay district, expressing difficulty in understanding the instructions F0. home treatment.

On February 19, Nghia’s 10-year-old son contracted Covid-19. Unable to contact the ward health station, he searched for information on F0 self-treatment groups. “Most of the online community advised me to give my child antibiotics and corticosteroids to recover quickly, but I understand that a child with mild symptoms does not need such strong drugs,” Nghia said.

Lucky to connect with a pediatrician, he was advised to treat his son according to the symptoms of a common cold such as fever-reducing patches, lung supplements, gargling with salt water and nutritional supplements from food, fruit. After five days of treatment, his son quickly tested negative, eating and sleeping well and his health is stable.

In order for families not to make mistakes, Dr. Truong Huu Khanh said that children with Covid-19 have not too severe symptoms. If there is a high fever or chills that only lasts for 48 hours, then there may be hoarseness, mild cough, vomiting, diarrhea, headache… and relief over time. Parents absolutely do not give their children miscellaneous drugs, especially anticoagulants and anti-inflammatory drugs without a doctor’s prescription.

As for Ms. Hoang Oanh, she spends a lot of money to buy medicine, but she hopes to have a standard prescription issued and guided by a medical facility, instead of letting F0 get lost in the “medicine forest”.

“Infection makes me too tired, now having to stay awake to choose the right medicine is too much, so whoever advises me to follow,” she sighed.