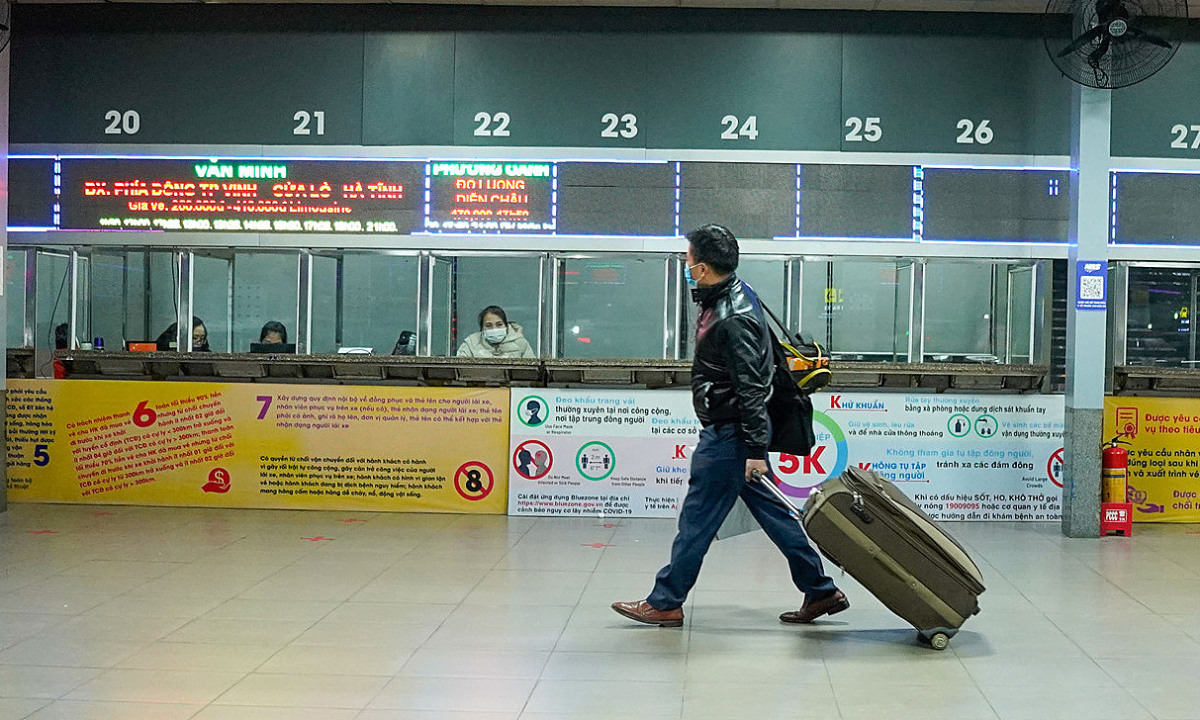 Two weeks before Tet, Hoang Tran last checked the items to prepare for a solo trip to Dalat. This was the first year she didn’t come home for the New Year.

The 27-year-old office worker in Tan Binh district, Ho Chi Minh City planned this trip from November 2021, after seeing a psychologist and was diagnosed with “excessive stress”.

“Six months of working from home made me often have headaches, insomnia, irritability, inability to concentrate, sometimes crying in the middle of the night,” Tran said. When the situation seemed serious, she had to seek the support of doctors and drugs.

According to Dr. Nguyen Viet Chung, Department of Mental Health, E Hospital (Hanoi), cases like Tram are not rare. In the second half of last year, the number of people coming to the clinic due to stress, anxiety disorders and stress increased more than before the pandemic. “It is difficult to confirm that the patient has a complete mental illness due to Covid-19. But during this time, the epidemic is one of the main influencing factors,” said Dr. Chung.

The most vulnerable group of people are those who work from home or are quarantined for a long time, can’t see friends, travel or work, their incomes are affected leading to stress, anxiety, emotional disturbances. .

Tram confessed another reason why she decided to escape this year’s Tet was the inconsistency in the regulations on isolating people returning from epidemic areas and constantly facing questions: When will you get married; High salary no; How much money do you bring home for your parents this Tet… making young people like Tran afraid to go home?

“I will spend the whole holiday in Da Lat,” she affirmed.

Knowing that Tran was going out during Tet, some relatives said she was selfish and did not know how to think about her family. But Mr. Hoang Anh, 65 years old, Tran’s father, is supportive. “Now that I have to go home, I also have to isolate, I want my children to be free and relieve stress during the Tet holidays,” he said.

“It is normal for young people to travel during Tet,” said Dr. Nguyen Anh Hong, a cultural researcher. According to her, the way of thinking “Tet is an occasion for people going far away to reunite, eat delicious food and have fun at festivals” is gradually changing. When the material life is higher, the need for spiritual enjoyment also needs to improve.

Traveling for Tet is a trend chosen by many Vietnamese and has become popular in recent years. According to the Vietnam National Administration of Tourism, Vietnam’s Lunar New Year 2016 has more than 9 million tourists. By Tet 2020, just before the pandemic broke out, this number was about 12 million.

Escaping Tet in Tram’s way is called “chic” by many people. After the fourth Covid wave, many people were forced to avoid Tet because they did not have money.

Nguyen Xuan Hung, 25 years old, from Nghe An, lives in Phu Nhuan district, Ho Chi Minh City, is an employee of a media company. On the first day he entered the city, Hung earned 10 million VND per month. Excluding the cost of meals, accommodation… he sent home three million.

The Covid-19 epidemic spread to Saigon, from May 2021, Hung’s salary decreased continuously, down to seven then two million. In October, Hung was on the list of staff reductions. To live, he sells clothes online, at most he can barely eat, unable to send even a dime to his hometown.

Losing support from her son, Hung’s mother worried about losing sleep and eating, imagining the scene where her only son lacked money, so he was starving and emaciated. She kept calling and asking to come home. “Work is getting harder and harder. Where can I get money for Tet? If I knew I was unemployed, my parents would only worry more,” Hung wondered.

Hung is just one of millions of Vietnamese who are going through the most difficult year caused by Covid-19. Nearly 13 million workers lost their jobs, laid off jobs, reduced their incomes or reduced working hours because of the fourth wave of the epidemic, according to a report by the General Statistics Office in July 2021.

“The reason many people do not dare to return to their hometown to celebrate Tet is experiencing an income shock,” said Dr. Pham Khanh Nam, Dean of the Faculty of Economics, University of Economics Ho Chi Minh City. In the survey on employment and employee income by the Research Board for Private Economic Development and the Electronic Newspaper VnExpress conducted in August 2021 on nearly 70,000 people, during the pandemic, only over 45% of their incomes remained unchanged, nearly 19% halved their incomes and 4.5% lost 80% of their salaries.

The latest survey by international data research and analysis company YouGov also shows that the pandemic has changed the personal finance picture in Vietnam. More than 53% of Vietnamese consumers cut non-essential items in the past 6 months. Meanwhile, 80% plan to continue cutting in the future.

“Reducing spending during the Tet holiday may be the plan of many people,” said Dr. Nam.

The complexity of the Covid-19 epidemic and the treatment policies for people from other provinces returning home to celebrate Tet also made many people decide to stay. The family of Hong Minh, 34 years old, in Dong Nai is an example. This year’s Tet plan of her and her husband is to rent a separate villa in the suburbs to relax, with the children to pack banh chung and bundles of spring rolls to send to friends, in order to increase the Tet atmosphere.

“Away from home, my wife and I just watch the New Year to come home, hope to see our parents healthy and brothers gathered after a year of many events. But this year the whole family will stay for everyone’s safety.” Minh expressed.

Cong Tuan, 27 years old, chose to stay in Ho Chi Minh City to celebrate Tet because his family in Dak Lak has young children, elderly grandparents, weak health and low vaccine coverage in the locality. His plan is to fully enjoy 9 days off after a long period of work until exhaustion. “Not going back, doesn’t mean giving up on my homeland. Because what I want is peace for the whole family,” he laughed.

For some people, Tet is an opportunity to make money to make up for the period of income decline during the epidemic. This is true for Minh Trang, 22 years old, in Nam Tu Liem district, Hanoi. Trang is a restaurant worker with a salary of 8 million dong per month, but in the past four months, she has only received 2 million dong in allowance due to the closure of her workplace due to the epidemic.

As the oldest sister, with three younger siblings, Trang talks about Tet at least 10 million VND. She plans to register to work for five days throughout the New Year, from the 29th of the lunar calendar to the end of the 4th of the Lunar New Year, the salary will be tripled.

“Everyone is homesick, but working for five days is almost equal to a month’s salary, I don’t want to miss the opportunity, when I live in poverty for many months,” Trang said and hoped that the money earned in the first days of the year would be enough to send gifts to her family. parents and buy more clothes and learning tools for the children.