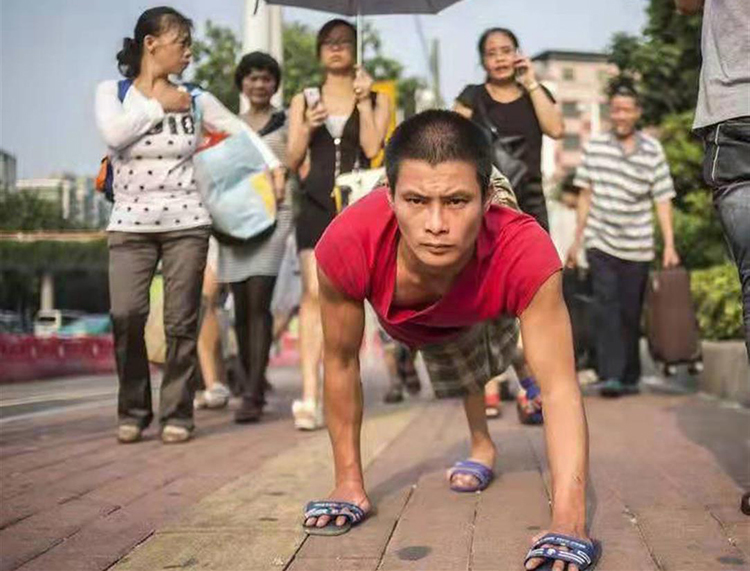 ChinaOn the street, the man put his hands on the ground, crawled through the crowd, sometimes holding up a piece of paper asking passersby if he had seen the baby.

This scene has appeared for seven years since Tran Thang Khoan lost his son.

Chen is 34 years old this year, from Zhanjiang, Guangdong province. When he was born, his feet were deformed and he could not walk normally. In order to move like other children, instead of getting up and learning to walk, Tran could only crawl. At the age of 20, this man was accepted to work as a worker in a factory near his home.

There, Tran met a young girl who was also disabled. Two people fall in love and get married. In April 2013, son Tran Dao Nguyen was born. The baby is healthy and lovely, bringing joy and happiness to the small family.

But on January 2, 2015, Dao Nguyen suddenly disappeared in front of his house. Tran was working at that time and rushed back, crawling around the village looking for him, but there was no trace. With no cameras or witnesses, the local police investigation reached a dead end.

The father suspects his son is kidnapped but he doesn’t have any clue about the traffickers. “I was so desperate at that time, I didn’t even want to live,” Tran recalls.

To get rid of the pain, the father constantly told himself, if he is desperate, he will never see his son again.

Because his wife is also a disabled person, Tran went out alone to look for children. The moment after the boy went missing, he crawled all over Zhanjiang city posting a notice to find someone. In places where there are many people passing by such as train stations, bus stations… Tran will stay there for a few hours, asking one person after another. Tired, lying down on the roadside to rest.

To seek help from the media, Tran spent several thousand yuan posting notices on local TV stations as well as reaching out to the City Association of People with Disabilities. Every time there was news somewhere suspicious about his son’s information, he immediately set off.

A few months later, someone told Chen to go to Guangzhou, where there are many media and kind people. Here, Tran received what he said was “unthinkable”, and more clues. But as a result, those children are not Dao Nguyen.

After that, Tran Thang Khoan’s “fingerprints” went further and further away. During the past seven years, he has been to Beijing, Nanjing, Hebei, Henan, Shandong and other provinces. The journey to find children takes this man to many places he could never have imagined. “Half of China,” Chen estimates.

To find his son, this father would often go for ten days and then return. Although he was as frugal as possible, he had already spent all his savings of 30,000 yuan (VND 107 million). Tran has been looking for children while working to maintain a family life, as well as to have more money to continue the journey that he does not know when to stop.

This man also joined a group of parents whose children were kidnapped. These groups often organize search activities at a specific time, but sometimes, group members feel that Tran Thang Khoan is difficult to walk, inconvenient to move, so they do not ask him to come along. But Tran still insisted on participating, because he wanted more people to know about his son’s kidnapping. “Children are my life, so wherever I go, I will go to the end,” the father affirmed.

During this process, he also received ridicule, some even told him to “color”, trick other people’s love, but Tran did not care. He admits to having received help from many sponsors, some people buy food and water, some people give money or help with accommodation.

Years passed, and Tran and his wife had another son and daughter, but his interest in Dao Nguyen remained intact. On the boy’s birthday, the father always buys a small cake to congratulate the son who doesn’t know where he is.

In the past two years, due to the influence of Covid-19 and the pressure of children, Tran’s trips have also been less. However, this man never gave up his intention to continue looking for his child.

“I used to have a nightmare. In that dream, Dao Nguyen told me ‘daddy doesn’t want to find me’. I woke up with sweat on my body. But now, I dream of finding my son and both fathers again. I’m all happy,” Tran said.