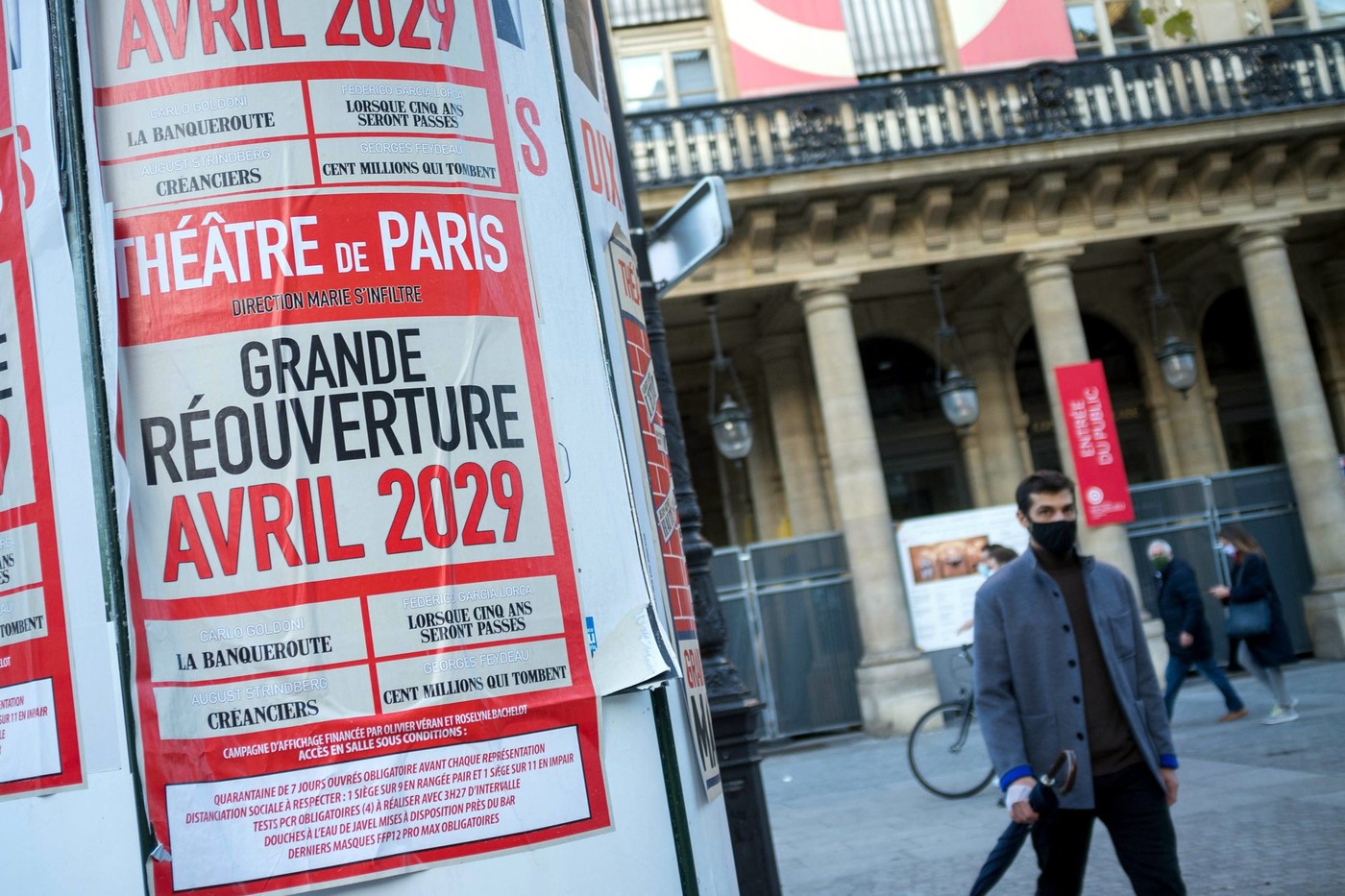 “We have no visibility on the evolution of the epidemic … Especially since the appearance of new variants of the virus complicates everything. “ : Roselyne Bachelot, January 5 on RTL, ruled out reopening cultural venues from January 7. “Museums could be the first to reopen”, simply admitted the Minister of Culture, without setting a date. Enough to shower the hopes of professionals who demand precise deadlines. Overview of pending sectors.

In Paris, the Bourse de Commerce, a new showcase for the Pinault collection, was to open on January 23. Its promotional campaign has been suspended but the hanging of the works continues in order to be ready in the event of a sudden green light. ” I do not understand why the government could not arrange in favor of museums and monuments provisions which would have avoided their outright closure. », Protested Jean-Jacques Aillagon, director of Pinault Collection. According to him, reduced gauges would have enabled compliance with “Satisfactory sanitary security conditions”. The former minister of culture denounces a “Corrosive uncertainty for the teams”.

At the Marmottan Museum, which was to open an exhibition on the Danish painter Kroyer at the end of January, the director, Marianne Mathieu, also decided to continue the hanging. “We have been mobilized for months to maintain our projects but if the closure were to go on for too long, it would be very difficult”, she confides.

At the Petit Palais, Christophe Leribault preferred to postpone his exhibition on “Vollard, Petiet and master prints” until the spring and decided to close on January 6 his beautiful exhibition on “The golden age of Danish painting. Which will only have welcomed the public for six short weeks.

Same regret at the Musée des Beaux-Arts in Lyon, where Sylvie Ramond, the director, comes ” to close with sadness its great exhibition “Picasso, Baigneurs, Baigneuses” which remains visible on our website “, she indicates. To his eyes, ” the big lesson of these recent months of uncertainty is that we must encourage teams to work to enhance our collections “. Even if she hopes to be able to open a major exhibition on the Flandrin brothers in the spring.

At the Château de Vaux-le-Vicomte, the largest private monument in France, winter closure is not a problem, the absence of a calendar yes. “I am appalled by this total uncertainty but we are still working on a reopening on March 27, explains its general manager Ascanio de Voguë. Vaux le Vicomte is a great machine, so uncertainty weighs on decision-making. You have to be agile enough to adapt at the last minute. “

Reopening for good is also the wish of theaters. All ticket sales are now suspended, and programming turned upside down. “Today, the question is not only to know when the cinemas will reopen but how will it be? asks choreographer Pierre Rigal. There will be a traffic jam of shows, one can wonder how they will be broadcast. “

Since the theaters closed in the fall, many plays have been edited and shown to professionals – journalists and especially programmers – in anticipation of an “after”, for the time being still very vague. ” As long as the virus is not eradicated, we cannot really restart, laments Jean-Marc Dumontet, at the head of several Parisian theaters. There is nothing worse than reopening to close again, as happened in the fall. “

Public theater shares this sentiment. “The psychological fatigue of the teams is immense, notes Robin Renucci, director of Tréteaux de France and president of the association of National Dramatic Centers (CDN). It might be better to close completely and prepare to reopen on a firm date, even if it was only going to be spring or summer. ” For Robin Renucci, the crisis must also open up new fields of reflection. “ The theater is not just about the theatrical evening, he explains. The CDNs are currently continuing their work in schools, but young people must absolutely be able to come to the theater. If we are to reopen in stages, it must start with them. Creation is an experience that is lived together, that is what we must transmit to them. “

→ SELECTION. Five shows of the year 2020 to see online

Betting on the future, Jean-Marc Dumontet has just set the dates for his Citizen’s Talk festival in April. “It’s paradoxical: I don’t believe it and at the same time, I’m preparing, he admits. We have to stay in this dynamic, otherwise we will miss the rebound. My only stimulus plan is to have great shows to offer when it reopens. What we are going through is psychologically grueling, but most theaters are financially supported. We must maintain the energy to be ready for the restart. “

Movie theater operators also hoped to be able to reopen “By the end of January”. “If the health situation deteriorates, it is different but all the other reasons not to leave us closed are not valid in our eyes”, explains Marc-Olivier Sebbag, general delegate of the National Federation of French Cinemas (FNCF). As for renegotiating the terms of a possible reopening, “The question is: how far are we prepared to go to reopen even in degraded conditions? “, he asks himself. A general curfew at 6 p.m. would cut the cinemas of the most frequented screenings and go under the 50% gauge would threaten the economic balance of the rooms.

The situation is even more complex for distributors who need time – between two weeks and a month – to schedule the release of films. “ Without a clear prospect of reopening, we can no longer work. We had to put the brakes on everything after having worked very hard to prepare for the December outings ”, regrets Étienne Ollagnier, at the head of Jour2Fête and co-president of the union of independent distributors (SDI). “It’s been two times that I rehired staff who were on short-time work to no avail. If we have no foreseeable date, I stop scheduling outings ”, confides Bénédicte Thomas, at the head of a small distribution company, Arizona Films.

The concern is all the greater as the stock of films on hold, currently estimated at more than 300, continues to grow. “Time is against us, says Jane Roger (JHR films) also co-chair of SDI. The risk, when theaters reopen, is that exhibitors will turn to the most profitable films to the detriment of the most fragile films. “

Distributors are therefore asking to be involved in a discussion on the date and terms of a reopening. They hope to obtain from the Ministry of Culture and the CNC a code of good conduct so that all films can find their place. “ One can imagine a calendar if not imposed at least reasoned during the few weeks which follow the reopening ”, suggests Étienne Ollagnier. The latter also calls for a system of financial compensation for losses linked to health constraints. ” If we reopen the theaters in degraded conditions, that’s the only way to maintain both releases and our operating accounts.“.