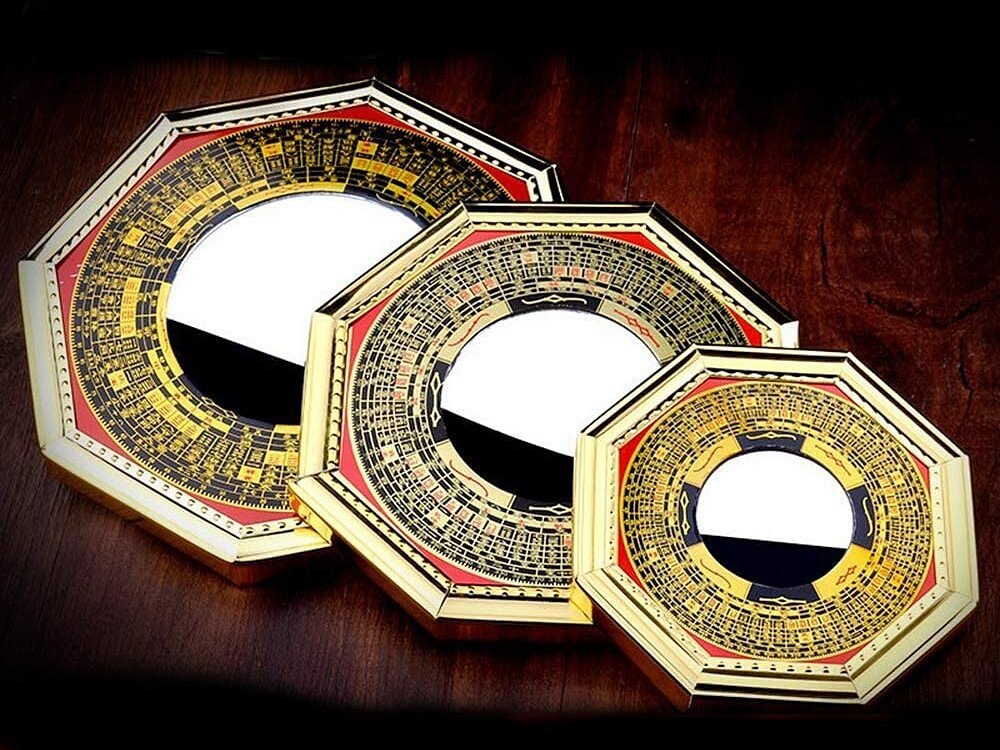 Using the reason “according to feng shui”, many people give superstitious views in hanging the bagua mirror.

They believe that the bagua mirror is a feng shui weapon that converges five feng shui elements, the Lac Thu diagram, the bagua diagram should be used to overcome, protect or neutralize the conflict for the houses with bad directions. , such as houses near graveyards, railroad tracks, overpasses, intersections or where there are large trees (affecting health, money, career).

In fact, the mirror of the bagua, as well as the statues of the zodiac, the Pi Xiu, the five emperors, the bronze gourd, the crystal ball, the seven star array, the wish-fulfilling jade, the Van Xuong tower, the feng shui wheel, the Nghe dong, the toad Thiem. Thu, feng shui salt, exorcism powder, disinfectant powder are not feng shui tools.

There is no official record of the origin of the bagua mirror. According to folklore, many ancient Taoists often used a piece of peach tree trunk wood with eight edges, smoothed on both sides, on which were carved 8 hexagrams representing the 8 directions of the universe (or using a sword made of peach wood). ) while practicing.

Enlightened Taoists often use these two types of “weapons” or the bare palm tree to subdue demons and bridge the island. The piece of wood from the trunk of the peach tree became famous thanks to the “magic force” of the Taoist. It is called the bagua because on the surface of the piece of wood is engraved the image of eight hexagrams (called a tai chi mirror when the face is engraved with a sun and moon shape). The power of the bagua mirror is actually the magic power of the Taoist monk.

In modern times, bagua mirrors are made of glass or metal, decorated according to some folk beliefs, designs are also quite diverse, with high artistic – decorative value.

Today’s bagua mirror is just an object that is capable of reflecting or condensing (if manufactured as a converging lens), so it should be used as a mirror (glass) in interior and exterior decoration. .

Mirror bagua is not capable of killing, exorcism, township, prosperity; Nor is it likely to harm the neighbours. In case of need to deal with psychological factors, it can also be applied. For example, for the yang Trach Pham radiating radial killing, direct impulse killing, natural recognition killing, heavenly killing killing, optical observation, shooting arrow killing … after being processed chemically according to the principles of feng shui, they can be hung. a trigram mirror to “make spells”.

When buying and hanging, it should be noted that the “standard” bagua mirror is always engraved with the hexagram of Qian at the top, ie at the head of the white fish in polar form; The Khon hexagram is engraved at the bottom, that is, at the head of the black fish. Houses and doors in any direction must hang a mirror in the right sky above the earth below, that is, the Can hexagram (in the position of the white fish’s eye) and the Khon hexagram (in the position of the black fish’s eye) lie on a straight line. Any new creations of the bagua mirror, hexagrams and drawings that are out of place should not be used.