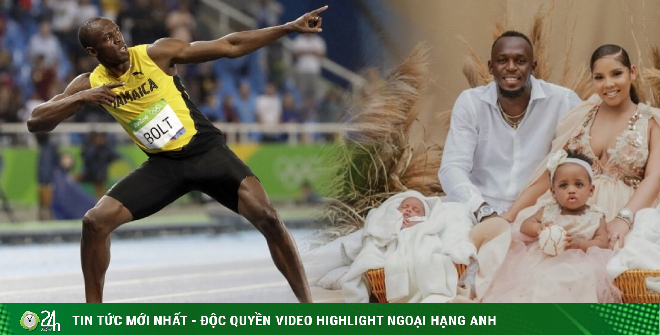 On June 20, on the occasion of “Father’s Day”, athletics legend Usain Bolt suddenly shared on Instagram his small family photo, and at the same time made public the newly born twins Saint Leo Bolt. and Thunder Bolt. Previously, Usain Bolt and his girlfriend Kasi Bennett did not reveal any information about their two children in the media.

Usain Bolt has been living with Kasi Bennett since 2015. In May 2020, the couple welcomed their first daughter, Olympia Lightning Bolt.

Witnessing the former Jamaican athlete to receive 3 children in just 1 year, fans liken Bolt’s “speed” to give birth as fast as his speed on the speed track. Besides, many fans also noticed that the naming of their children was inspired by Bolt’s own nickname “Black Lightning” (English nickname: Lightning Bolt).

In 2017, Bolt announced his retirement from running after the world championships and “encroached” into professional football. He tried a job at an Australian team but was not signed. Since then, the relationship between Bolt and sports officially ended.

Currently, the former Jamaican athlete spends time investing in the business and running the electric car company named after himself (Bolt). Usain Bolt thinks Cristiano Ronaldo will now beat him in a run.