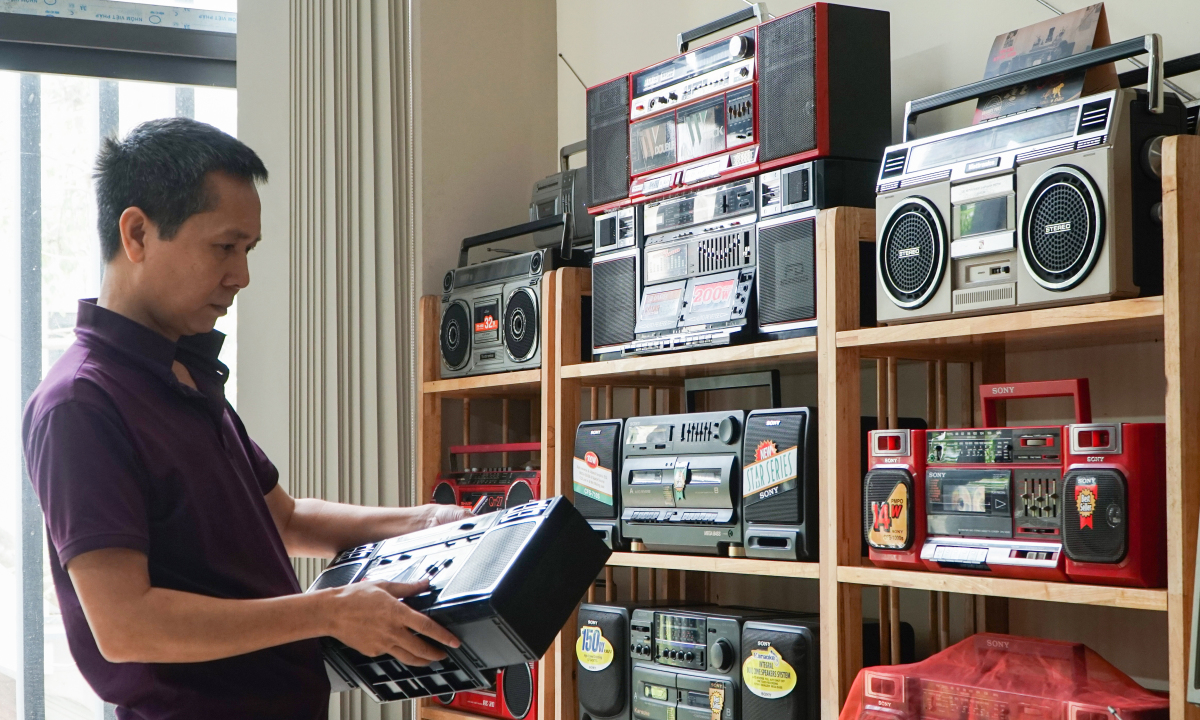 Mr. Thuy said that in order to have this collection, he had to work hard to hunt at home and abroad, thanks to searching at electronic waste dumps in Japan, Cambodia, even all night watching online auctions like eBay. , Yahoo Japan. “It’s been a very arduous but rewarding process,” he said.

In 2017, once sitting at a cafe, Mr. Thuy happened to hear a melodious piece of music, the original, rustic analog sound emanating from an old cassette radio, making listeners reminisce about the 80s and 90s of the century. prior to.

Like black and white TV, at that time cassette radio was the wish of every family, its value could reach even a gold tree by hearing news, music and learning foreign languages…

“At that time, only great houses had cassettes, mainly thanks to buying them from abroad. I sometimes ran to my neighbors to listen to them, but I was often reminded “not to touch objects”. I was determined to own one,” said Mr. Thuy, pointing to the first cassette he owned, the RX C40F of National, bought in 1991 for the same price as selling a pair of pigs. Since then, the radio has been solemnly placed in a corner of the house and is often used.

In the first half year since he started hunting for antique cassettes, he managed to buy about 400 units, mainly from groups on social networks, old audio forums and electronics dealers from Cambodia. But many times Mr. Thuy was deceived, bought faulty radios, damaged, replaced components.

For him, a beautiful radio, highly appreciated for many years, remains as new as when it came out of the factory; buttons, chrome-plated parts are still bright and beautiful, not silver, worn; Components must be original, never repaired, replaced or modified.

The radio that consumes the most time and effort of his is Viettronics RX-4960, manufactured in the 1980s in Vietnam.

“After two years of collecting and owning a large number of large cassettes, but I have not found a radio produced in Vietnam,” said Mr. Thuy. After a long time researching, he knew that a former electronic engineer at Bien Hoa Electronics Company still had one assembled in Vietnam called Viettronics, so he quickly found it.

The first time he offered to buy, he was refused. After many times of flying from Hanoi to Bien Hoa to convince, billion, and finally the owner of the radio also agreed to cede it, with the same condition “must keep, do not sell”. True to his promise, every year Mr. Thuy still takes pictures and videos to send to report with the message “Your memories are also my memories. Even if someone bid high, I won’t sell”.

After 5 years of collecting, Mr. Xuan Thuy owns more than 1,400 cassettes with all brands, designs, sizes and colors ranging from joint ventures, imported and hand-carried from abroad. The newest one is over 30 years old.

Currently, he only keeps more than 400 units at home, nearly 1,000 are brought to exchange and display at coffee shops across the country. In addition to second-hand items, he keeps a number of unused, unworn, unbranded cassette radio sets, which are very rare on the market.

Owning a collection is rated “terrible”, depending on the price ranging from a few hundred thousand, a few million to a hundred million dong, but Mr. Thuy said “don’t care about expensive and cheap, just focus on emotions”. For him, each radio holds the story of a golden age, when looking back, it remembers the past memories.

In addition to collecting antique cassettes, the 52-year-old man also tinkered with and restored the stamps on the product. “Many old speakers have been stripped of their labels, looking very monotonous and faded, I started making clothes for them. As for the ones that couldn’t find a model to restore, I made them myself, based on my own research. friendly and in line with the brand’s style,” he said.

To date, Mr. Thuy has restored and designed about 1,000 different stamps by himself. There is a stamp that he designed into a brand, many people mistakenly believe it to be original.

As one of the early collectors, Mr. Thuy believes that the number of people willing to play and pay is increasing. Before 2017, most were single players, few in number, but now social networking groups have several thousand members. The demand for buying, selling and exchanging increased rapidly. “But players need to be careful with scams to avoid losing money,” he warned and advised newbies to find a reputable trading address or ask an experienced person for help.

Currently, every day, Mr. Thuy receives three or four offers to help find old cassette radios, from radio lovers who want to reminisce about the past, all over the country. The whole job of finding and informing people in need, he did not take the work, quoted the right price. “The biggest thing I get are friends with nostalgic interests who want to find the past,” he said.

In the coming time, Mr. Thuy will still pursue his passion but focus on finding the model of Vietnamese cassette radio, along with a number of unique, strange, and undamaged products.

“Many people say I’m crazy about displaying inanimate metal boxes, but hearing the old sounds come to life in the modern world is priceless,” he confided.