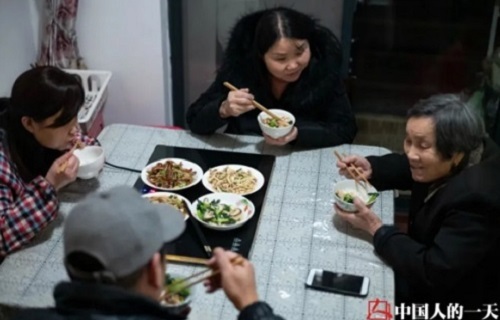 ChinaLuo Zhen was very angry when she had a high fever when her husband left. But when her father died, her mother’s health worsened because of Covid -19, she sympathized with his choice.

On December 29, 2020, Wuhan had a snowstorm, the temperature dropped to minus 8 degrees Celsius. The leaves of the roadside trees withered, their branches withered. Luo Bin seems to have known this scene in advance, as in February 2020, Wuhan had such a snowstorm. During that time, Luo Bin and his twin sister Luo Zhen, as well as their father, mother, and second sister – a family of six were infected with CoV.

The father died before being diagnosed. Now, a year later, their family’s life seems normal. But Bin knows, if something is lost, it will be difficult to get it back.

Their parents gave birth to 5 daughters, Luo Bin and Luo Zhen being the youngest. On January 22, 2020, knowing that Wuhan would blockade, the two sisters took their parents to their second sister’s house for convenient care.

But Luo Bin was the first to have a fever. Then the second sister and brother-in-law had a fever of 40 degrees. The couple was immediately admitted to the hospital. The two girls and their parents returned to their old house. But then Zhen and his father also had a fever.

On February 7, Bin took his father to the hospital, waiting until noon to be tested. “Dad has cancer, he’s in poor health. There’s nothing to eat near the hospital. Dad said he wanted to go home so I took him home,” she said.

At home, her father had no fever so he wanted to rest so that he could go for the test the next day. That night, Luo Bin left his parents home. “Mom called in the middle of the night to say he was having a hard time breathing,” she said. Luo Bin’s brother-in-law immediately brought the police and medical staff to her home, but her father passed away. It was not until the next afternoon that his body was taken away.

Father died, Luo Bin took his mother to the hospital. Her oxygen saturation in her blood is very low. The doctor said if she was not taken to the hospital in time, she would end up like her husband. After that, her mother’s spirit worsened. She didn’t know why she was in the hospital, she didn’t know what was going on in the city. She did not know that the husband had left forever.

On January 27, 2020, Luo Zhen had a fever. That night, she had dinner with her husband at home and felt unwell. After fever reduction, the body temperature was at 38 degrees. The husband slumped on his face, immediately stood up, and took out his coat.

“At that time I was dumbfounded, thought he was joking. But a few days in a row he didn’t come back, I called to ask if he really left,” she said.

Husband always treated her very well. Luo Zhen could not believe her husband “ran away”. Since having a fever, being hospitalized, entering the intensive care unit, going to a shelter, being discharged, going on quarantine, going home from recovery, Luo Zhen has not seen her husband. That period lasted half a year. “I was even more desperate when I heard that my father passed away. I couldn’t cry and slept for three days and three nights,” she said.

Her bad mood caused the oxygen saturation in her blood to drop drastically. Luo was given a ventilator to sustain life.

On March 9, Luo Zhen recovered and was discharged from the hospital. On the way home from quarantine, she called her husband. “I stay with my mother to take care of,” explained the husband. Luo Zhen lives in the same residential area as her biological parents, not far apart. But after that, she stayed with her mother, not going home.

One day in May, Luo Zhen called her husband. They met in the yard of the apartment building. Both wore masks and greeted from afar. This is the first time the two have met since she was sick.

It was not until June that Luo Zhen went home. At first she “could not accept her husband’s manners and attitude”. The more she thought the more angry she became. “But now that I think about it, maybe he was right to leave. If he was also infected, no one would care.”

Forgiving her husband, Luo Zhen also sympathizes with those who shun her.

In August 2020, Luo Zhen went to play mahjong as usual. Seeing her, someone said, “You shouldn’t come here. People are afraid of you.” “Why? I am cured”, she asked again. “But you are infected, this incubation period is long so it will still spread when you recover”, this person replied.

Going to dance, the friends who saw her immediately disappeared. Many people knew that Lou Zhen had been infected with Covid-19, so she told her to stand outside the door when she paid the bill, not to enter the house.

“To outsiders, my life seems to have returned to normal. But only I knew the cracks appeared after the peaceful days and it took a while for me to really heal myself,” Luo Zhen said.

For Luo Bin, the early days of 2020 were truly a nightmare. When the pandemic first broke out, she and Luo Zhen tested together. Luo Zhen had a positive result and was immediately taken to the hospital. Luo Bin was on home isolation because his first test was negative. “After my father passed away, I took my mother to the hospital. Then I was diagnosed positive for the third time when I got to the quarantine.” The first person to have a fever, but the last to be diagnosed, reality as a joke to Luo Bin. “It feels like I’ve harmed my whole family,” she said.

During his home isolation before learning he was infected with the virus, Luo Bin was extremely panicked. She was afraid she would die suddenly in the middle of the night like her father. She asked her sister to pick up her daughter to avoid infection.

She once wrote a suicide note: “Son, I’m sorry, I can’t go with you for the rest of the days …”, then put it in her daughter’s drawer. On February 16, Luo Bin was hospitalized. When doing the psychological questionnaire, it was found that she suffered from mild depression, although she was inherently happy.

Fortunately, Luo Bin does not live alone in the hospital. In addition to the medical staff, there is also a group of volunteers who often call and video chat. “At that time, it was like walking in a dark tunnel. Suddenly someone reached out to show you the light,” Luo Bin recalls.

In July 2020, two twin girls with their eldest sister, the third sister, took their mother to a holiday in Loi Xuyen, An Thi, for a month. “It was the happiest, most carefree month because no one knew who we were,” she said.

On New Year’s Day 2021, Luo Zhen and Luo Bin were once again taken to the river by their mother to play. The weather was very good, the sun was shining on the Yangtze River Bridge.

The two sisters chose a small, open space with no one to play music and dance.

Intelligent Update (According to the Chinanews)