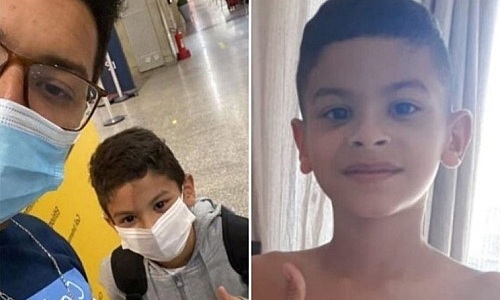 That morning, the boy’s parents in the city of Manaus reported their son missing. “I woke up at 5:30 a.m., looked at my phone for a while and got out of bed at 7:30 to find out that my son was no longer in the bedroom,” said Daniele Marques, the boy’s mother.

After reporting at the police station, the mother posted a picture of her son on social networks asking the community to help him. At around 10pm, an employee of Latam Airlines called her to inform her that the boy was at Guarulhos airport, nearly 2,700 km from home.

Emanuel told the airport staff that because of his passion for travel, he fled his home to the nearby airport on the morning of February 26, trying to get on a plane without a ticket with tips to learn on the Internet. The boy took a flight from Manaus, in northwestern Brazil, to the city of Guarulhos.

Manaus airport management is investigating a security breach that allowed the boy to board the plane without his passport or luggage. Local police also extracted airport security cameras to conduct investigations. Police said, Emanuel revealed he went to Sao Paulo to visit some relatives.

After formalities and negotiations between the guardianship council and Latam airline, the child returned to Manaus on the morning of February 28.