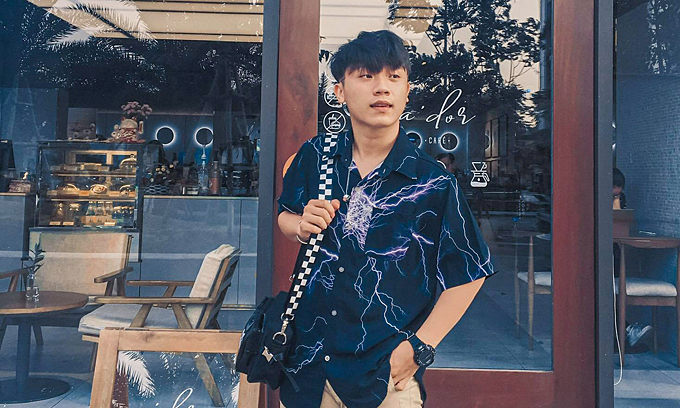 Tran Minh Bach became a new student at an international university in Ho Chi Minh City a year later “so as not to waste my parents’ money”.

“The school’s tuition is about 320 million VND a year, 10-20 times higher than the tuition fee of public universities, so I was very hesitant, afraid that I would have to drop out of school halfway,” the new student said.

While pondering, Bach asked his parents to let him enter school a year late so that he could invest more in English and other skills in order to feel secure in following the program. “But I also want to use this time to think about what I really like,” Bach said.

Not lacking in confidence like Minh Bach, Hoang Tri Dung was confused with what he was studying, so he decided to pause 2018, when he was a second-year student at Hanoi Foreign Trade University. “I ‘dropped out’ because I want to take the time to find out what I’m good at, what I like to do, and experience new jobs and new lands that I didn’t get when I went to school,” Dung shared.

Minh Bach and Tri Dung are two of the Vietnamese who follow the gap year trend, which is very popular among young Westerners. A gap year is a break of about a year, usually when moving from high school to college or halfway through college.

According to a 2018 study by the European Statistical Organization (GSE), an average of 230,000 Britons aged 18-25 participate in the gap year movement each year, and this number is continuously increasing year by year. year. In the US, in 2020 alone, about 20% of Harvard students decide to apply for a reservation for a gap year, 3 times more than in previous years. At the Massachusetts Institute of Technology, the rate is 8%, up 1% from 2019.

Professor Truong Nguyen Thanh, former vice president of Hoa Sen University, lecturer at the University of Utah (USA) and some universities in Vietnam, commented that gap years are not really popular in Vietnam but will increase in the coming time. “The pandemic has made many families unable to afford to send their children to college. Many young people will postpone going to university or reserve their results, go to work for a while before returning to school,” Thanh said. .

One reason that gap years may be more popular in the coming years is the growing awareness of autonomy among young people. The British Council’s August 2020 study of the Vietnamese Young Generation of 1,200 people aged between 16 and 30, found that about 40% felt pressured to pursue the types of study and work their families wanted. .

To gap year, most young people have to overcome obstacles from their families. At first, Minh Bach’s parents did not agree with his son’s choice for many reasons such as “being idle at home”, “Nobody does that”… The boy took many days to convince.

And Tri Dung knew that his parents would not support him, so when he announced that he would drop out of school, he also asked to “cut off aid”. With only 70,000 VND in his wallet, the young man from Hai Phong had to ask for cold rice from some friends in Hanoi, the money to buy water. At this time, Dung knew that he had to “live before talking about passion”.

A 2015 survey by the Gap Year Association and Temple University (USA), who were away from school for an average of a year, said that the time off helped them expand their knowledge and acquire the skills to succeed in life. Karma. Deferring admission for a while can also lead to higher grades later, according to research from Middlebury University (USA).

But the gap year is a “double-edged sword”, using it for personal development is an opportunity, using it as an excuse to leave school is a risk, the consequences of not discovering anything are losing motivation. Master Truong Nguyen Thanh warned. “90% of students who took a gap year before going to graduate school did not return. Those who took a gap year before going to university face a higher risk because their purpose in life is unclear and they have lost their study habits.” , he said.

During a year off, Minh Bach aims to learn more English to achieve IELTS 6.5. He works part-time at a cafe and sells shoes and clothes, so he doesn’t have to ask his parents for money. “Thanks to a clear goal, I never feel lost. I learned patience when going to work. What I am most proud of is knowing many talented people to learn from,” the guy said.

However, for the first time entering the international environment, Bach was sometimes confused. He tried to adapt with his improved English. “This attitude and relationships are all acquired in a gap year, if I don’t go to school, I will be overwhelmed and find it difficult to revive my spirit,” said the student in Binh Chanh, Ho Chi Minh City.

With Tri Dung, since the gap year with 70,000 VND, he has been diving online to find a job as an English translator. Since 2019, Dung has been working in sales for foreign education companies, car sales, and insurance. From an initial income of 2 million VND per month, at the end of 2020 the boy caused a stir in social networks when he reached an income of 5,200 USD a month.

Experiencing dozens of different jobs, Hoang Tri Dung found that only by working hard to learn quickly. The more Dung goes to work, the more motivated he is to study. Last year, he went back to school to complete his graduation certificate. Currently, the guy still spends 3-4 hours a day learning new knowledge, even investing in learning from famous businessmen. Once he spent 40 million dong to attend a course of a Canadian millionaire, or buy tickets to a year-end party with Shark Linh…

Two and a half years gap year also oriented career for Tri Dung. Currently, the 23-year-old is the founder and CEO of a recruitment and career guidance company for students.

“After all, the gap year for me is not a period of silence but a time to prepare the pedals before accelerating. Some other people I know see this as a time to take a step forward in their career rather than a one-off. hit the pause button at school,” the young CEO said.