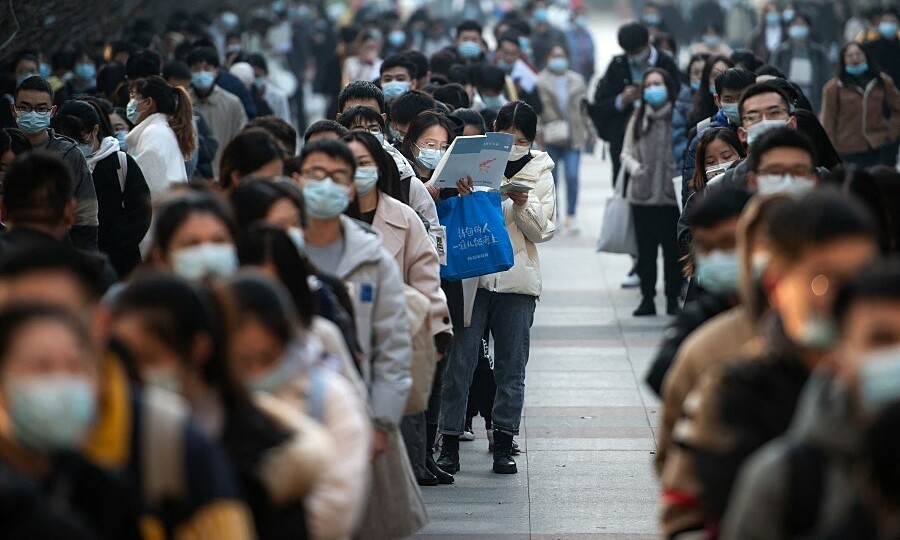 After two years of the pandemic, some young people tend to leave private businesses and enter state agencies to “find a stable haven”.

Zhang Yunbin, 29 years old, is working for a large Internet company in Beijing. After two years of struggling with work, in 2020 Zhang quit his job and returned to his hometown and took the civil service exam.

Initially, the high salary was the reason that brought Zhang to Beijing, the city considered the first-class in the country. But he gradually lost his sense of “gaining something” due to the company’s operating model and overly competitive culture. Moreover, the sky-high house prices in Beijing also made Zhang decide to leave the hottest field today.

The figures show that after a brief lull, the number of people applying for the civil service exam has steadily increased over the past few years, reaching a record high of more than 2.02 million people earlier this year.

A study last March of Zhaopin.com showed that after the pandemic, nearly 50% of survey respondents “value stability over high wages” and nearly 30% tend to “prefer jobs in the public sector such as state-owned enterprises and public institutions”. public office”.

Zhang says he has always been at the right time – entering the internet at its peak and moving into civil service before the competition is as fierce as it is now. “I’m glad I made this choice,” he said laughing over the phone.

In contrast to Zhang, Tan Xinliang is full of optimism about the Internet giants. Hailing from Xi’an City, Tan has just obtained a degree in information engineering to improve his skills. He now works in Chengdu for a state-owned enterprise and thinks young people need to move out of the public sector and into the private sector to go further in their careers.

Given the wave of layoffs at top companies like Alibaba, ByteDance and Kuaishou last year, Tan believes this is good for the industry as a whole. “In the same way that waves would wash away sand, what’s left behind is really relevant for the field,” he said.

Liu Boyi, from a central Chinese province, graduated from the University of Glasgow (UK) with a major in marketing management, chose to work in the Internet field as her boyfriend. Coming from a family of civil servants, she felt that she was not suitable for this field, but recently she began to waver.

Liu said, with age and changing priorities, it does not rule out that she will enter the public sector. However, the criteria for the civil service exam are very strict, some places even require household registration. Therefore, if she wanted to settle down in a first-class city, she had to plan more carefully.

Wang Yanbo, an associate professor of strategy and innovation at the University of Hong Kong, said that among private companies, the Internet is still one of the most attractive fields for young people. The concept of the “internet sector” has a lot to do with the digital economy, which is central to future development.

Researcher Meng Yu of the Zhongguancun Innovation Institute believes that the Internet sector is not shrinking, but growing. The migration of young people from the internet sector to other sectors, including the public sector, will promote the integration of different sectors and is not negative from a macro perspective.

However, Wang Yanbo has the opposite view. He believes that a large number of young people moving from private enterprises to the public sector will waste talent to some extent.

“Talented individuals can still achieve good results when involved in the public sector, but if they are brought into an external competitive environment, they will do even better,” he said.