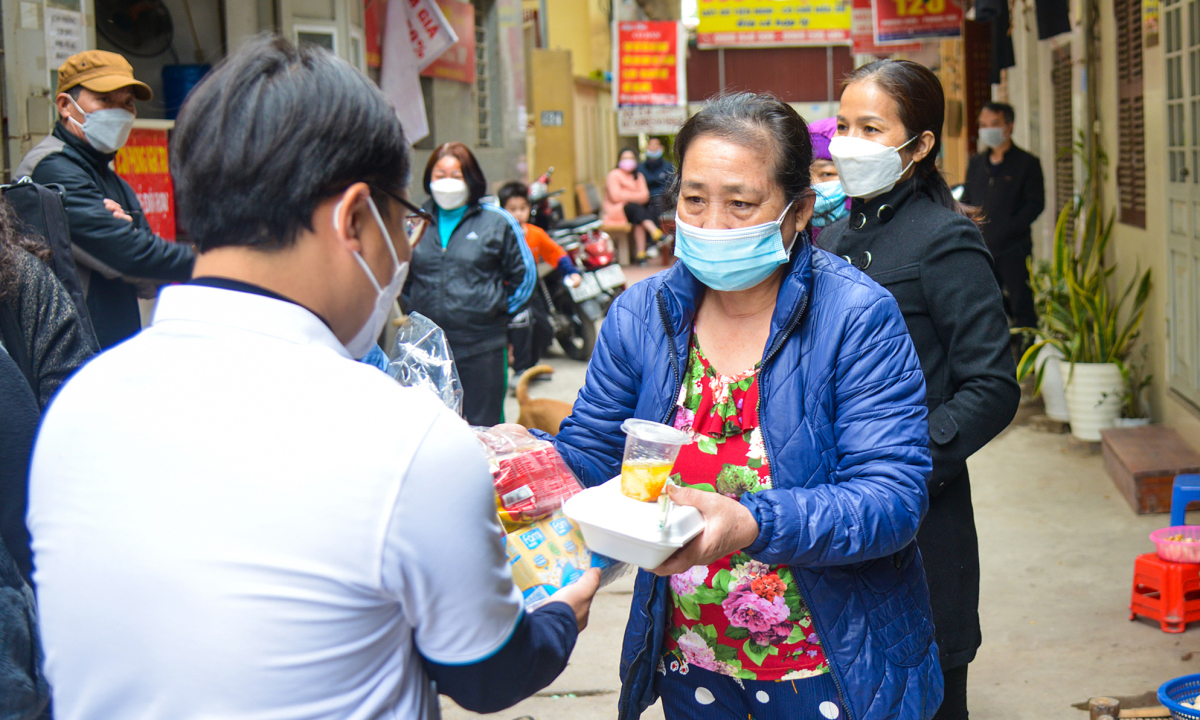 Instead of waiting in line to receive rice as usual, at noon on December 30, Mrs. Tuyet, from Thanh Hoa province, received a box of banh cuon filled with cakes, cinnamon rolls and a gift from Yen Vui restaurant.

Mr. Nguyen Cao Son, the owner of the restaurant, said that this is 500 sets of Thanh Tri rolls to change the last day of the year for customers who are cancer patients being treated at K Hospital at Tan Trieu campus, to help them feel good and recover. strength after long courses of treatment. The cakes with full sausages, rolls, herbs and dipping sauces and pickles are prepared and canned right before serving time, keeping the fresh taste. Immediately after being packed, the cakes are transported to all the hostels around K Tan Trieu hospital to give to the patient’s families.

Yen Vui restaurant has two establishments in Hanoi, on average, each day sells 500 meals of 1,000-2,000 VND to people. Unlike Dong Da facility, where many freelance workers and homeless people are concentrated, Tan Trieu facility focuses on cancer patients and family members. Here, they struggle with illness in motel rooms with an average price of about 100,000 VND per day. For each popular meal, the lowest price of 20,000 VND is still high for families. The fact that the restaurant takes money from 1,000 to 2,000 VND is just a symbolic price for people to see that they are spending money to buy rice and eat in a comfortable and happy mood.

With her right hand holding a box of cakes, her left hand carrying a gift bag, including cakes, milk, and masks, Mrs. Nguyen Thi Tuyet quickly walked back to the motel deep in the alley near K Hospital. , have this dish, hopefully he can eat more,” she said.

For the past ten months, a woman in her sixties has remained in the city, taking care of her husband with rectal cancer. Day by day taking her husband to the hospital and being unable to find a job, she could only save the money sent by her children and grandchildren in the countryside. “The charity meals have helped me save a little money to treat my husband’s illness,” she said thanks, at the same time, her voice lowered when she shared that this New Year did not know if she could return to her hometown.

Mr. Nguyen The Hai from Tu Ky, Hai Duong has only been to Hanoi for nearly a month to check for stomach cancer. At first, he was afraid to receive rice, but later learned that the restaurant sold rice for 2,000 VND year round, so he happily came to receive it. “Today, having a gift like this makes me feel warmer when I have to be away from home for treatment,” he said.

“My grandfather loves to eat rice at Yen Vui restaurant because it’s clean and delicious, so I often go to the restaurant to buy it. There’s a box to put 1,000 dong to 2,000 dong in it, it’s okay if someone doesn’t drop it,” Ms. Ngan said. , who is also taking care of her husband at K hospital.

Only in lane 15, opposite K hospital, Mr. Son and volunteers always bring rice to his room to give to Mr. Lo Van Thee to take care of his wife Lo Thi Tuyet suffering from breast and uterine cancer. A couple from Dien Bien had to borrow VND 200 million for medical treatment. Or like mother and daughter Nguyen Thi Huong, 17 years old, in Hai Phong. The mother has AIDS and a tumor in her abdomen, while Huong has a large tumor in her shoulder.

Mr. Son said that the operation of the shop has received a lot of love and support from the patients themselves. Many of the patient’s family members have contributed food and money to bring delicious, clean and loving servings of rice, pho, and cakes to more scenes of life.

Two establishments of Yen Vui restaurant in Hanoi, located in the Yen Vui and Smile rice chain, in Hanoi, Da Nang, and Ho Chi Minh City, sponsored by the Lotus charity fund. The shop in Tran Quy Cap (Dong Da) opened at the end of 2020, while in Tan Trieu opened during the peak of the epidemic in June 2021. During the two months of Hanoi’s separation, tens of thousands of free meals, 3,000 meals and hundreds of tons of vegetables were donated by Tan Trieu restaurant to disadvantaged people and people in the quarantine area.