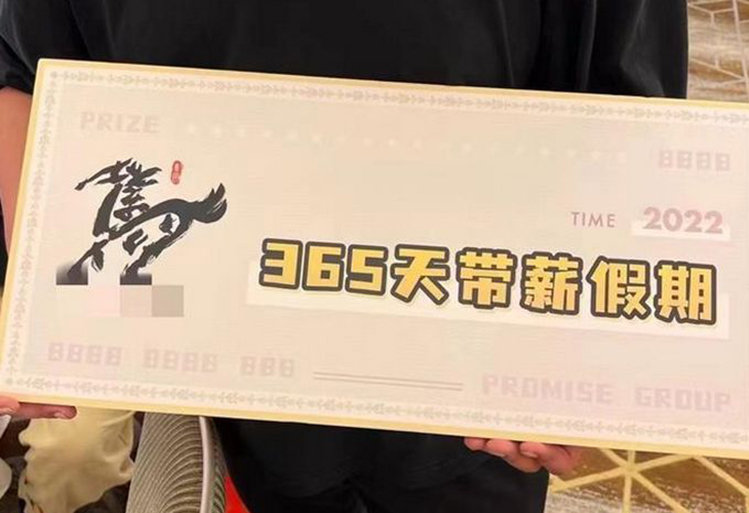 ChinaA man surnamed Lam from Shenzhen won the award at the company’s year-end party on January 26.

The party took place before the Lunar New Year holiday. Lam and 70 colleagues participated in the drawing game and he was lucky to win the first prize “365 days of paid leave”.

“At first I thought it was a joke, but the director said it was a serious reward. I wasn’t fired, but I got paid leave,” Lam shared with joy.

On January 27, Lam received a call from the director, asking if he wanted to take 365 days of paid leave or would like to receive 200,000 yuan (712 million VND) – instead of the prize. This position also promised that if he continued to work, Lam would not be forced to work administrative hours like other employees, but he could come to the company at any time. After thinking for a while, Lam chose the second way.

With 200,000 yuan received, Lam immediately transferred 10,000 yuan to a charity fund, supporting children in the highlands during the Lunar New Year. With the rest of the money, the 30-year-old said that he gave his parents a Tet holiday, and the rest would buy some essential items and save it.

On January 28, Mr. Hoang, who is in charge of the media company where Lam works, shared that the company’s profit in 2021 is very good, so the board of directors devised an award to encourage efforts and work. employee work.

When this information was shared, many Chinese internet users were jealous of Lam and asked, “Is it too late to join this company?”.

Recently, a ranking of the average Tet bonuses in major cities in China was also shared by many people on social networks. Shanghai is the city with the highest Tet bonus in China with 425,000 yuan (1.5 billion dong). Followed by Beijing, Shenzhen, Hangzhou, Guangzhou with the amount of 402,000 yuan, 355,000 yuan and 305,000 yuan respectively.