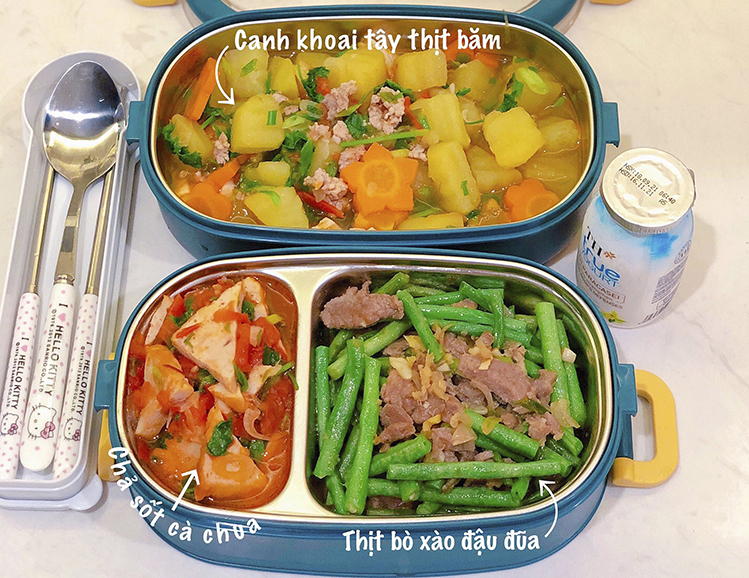 HanoiSince eating lunch prepared by his wife, Mr. Chung has lost 2kg in two months by abstaining from starch.

Mr. Le Manh Chung, 34 years old, in Thanh Xuan district has a “human organ” that is easy to gain weight, so he has abstained from starch for three years. At the end of the gap two months ago, the owner of this fashion company returned to work, but the familiar restaurant had not yet opened. Dang Thu Ha, 33 years old, his wife, decided to make a Japanese lunch (bento) but did not have rice for her husband to bring to work.

Every day, Ms. Ha usually gets up before 6 a.m. and prepares breakfast for the whole family of four, including husband and wife and two young children.

Food was bought by Ha the night before, prepared and then stored in the refrigerator, only to wake up the next morning to cook. She also planned the menu in advance, but in order to create a surprise, she rarely asked her husband what he liked, but followed inspiration.

Ms. Ha said that because she uses two kitchens at the same time, the cooking time is only 15-20 minutes each morning, including making bento for her husband and breakfast for the whole family.

Every day, Ha carefully calculates calories to have enough energy for her husband to work. She often chooses protein-rich foods such as chicken breast, shrimp, and lean meat. Vegetables are easy to prepare such as lettuce, cherry tomatoes, carrots, susu…

The idea of ​​​​decorating a lunch box Ha is always available in mind before buying ingredients. She is also more creative to match each different dish. Because the ingredients are prepared with other family meals, Ha cannot calculate the specific cost of each lunch box.

On special days like holidays, anniversaries of the couple… Ha often cooks his favorite dishes with fruit or coffee.

Le Manh Chung said that every day when he receives a lunch box from his wife, he is as eager as a child to open a secret gift box. Since the day he worked hard to eat bento without his wife’s cooking, he has lost two kilograms. The wife has the habit of taking pictures to save and post on her personal page, so sometimes colleagues even see the menu before her husband.

Of the dozens of lunch boxes prepared over the past two months, Ha misses the box of chicken the most. She spends a lot of time cooking, hope her husband will like it. However, at noon, Mr. Chung texted that he was afraid of such dishes cooked with whole children. That day he almost didn’t eat, only picked up vegetables, so he was hungry.

“I learned more about my husband’s hobbies or fears from the bento box, which was rarely noticed before,” she said.

Running his own business, Mr. Chung is very busy. Since the wife prepares the lunch box, the husband has more time to rest at noon. At night, when he returned home, he was in a good mood, playing with his two children more. According to Ha, preparing food for her husband every day is also a factor that helps the family bond more closely.