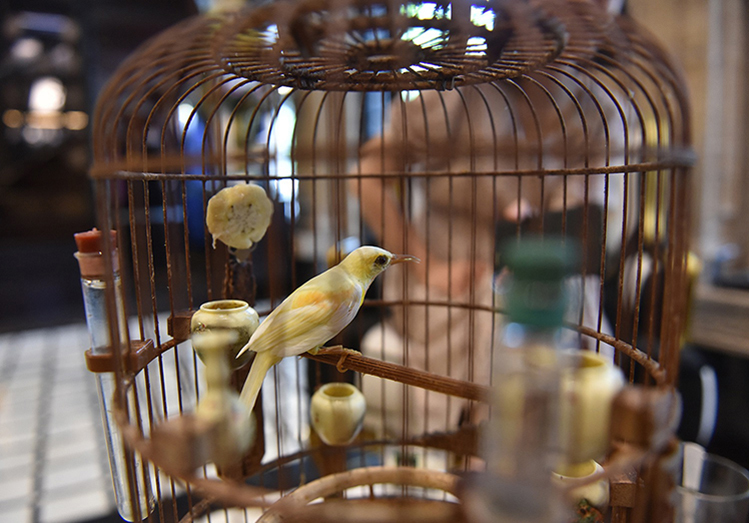 Many times people feel that life is not happy not because we get too little, but because we want too much.

American psychologist William James once made a bet with a friend named Carlson that would make him raise a bird. Carlson did not believe because he had never been interested in keeping birds.

For Carlson’s birthday, James gave him a birdcage. The gift is placed on the desk thinking “this is just a beautiful craft”. But then anyone who visits also asks “Do you keep birds?”. Carlson always goes to great lengths to explain “I’ve never had a bird”. However, people still do not believe. Reluctantly, Carlson bought a bird and put it in a cage.

The “birdcage effect” refers to people if they randomly get something they don’t need, because they want to avoid waste or for other reasons, they will consciously or unconsciously continue to buy more things that they don’t need. no other need.

In life, the “bird cage effect” is not uncommon. Many people are always chasing, and in the end are overpowered by matter.

Recently on China’s Zhihu Q&A, a girl told me that her mother is a hoarder. When she lived away from home, the mother turned her daughter’s room into a “grocery store”, piled up with cheap towels and old clothes.

Once, the girl needed a passport to go on a business trip, asked her mother to help her but couldn’t find it for half a day. Because she was so upset, she quarreled with her mother, and eventually did not return home for many years. “My house looks like a warehouse, but I keep telling my mom to pack up and there’s a conflict.”

“Everyone hopes to live in a spacious and comfortable house, but they constantly buy and hoard, making redundant things more and more and pressing their own living space. That is, everyone is equal. trying to do addition, but for real happiness, please try to learn subtraction,” concluded the girl.

The ancient Greek philosopher Episcopia once said: “The happiness of human life should be less dependent on external things”. When we own something, we are also possessed by it.

“The excess things in life will waste a lot of our time, mind and body. Happiness is not a flashy look on the outside but lies in the soul of each person,” Episcopia asserted.

Another Greek philosopher, Socrates, was once invited by students to go shopping. “There are a lot of new things at the market, you’ll definitely like it when you go there,” they told him. However, after going around, Socrates returned empty-handed and said: “The greatest benefit of this trip is that I have discovered that there are many things in the world that I do not need.”

According to the philosopher, many times people feel that life is not happy not because we get too little, but because we want too much.

Reality has proven that the more successful people are, the more they will pursue a simple life, moreover, they will not let material desires and interests control themselves. While many people are trying to do addition, those who know how to live, like them, are doing subtraction all their lives.

At the age of 35 years, Chinese writer Khoan Khoan and her husband left Beijing to Dali district, Yunnan province to settle down. When packing, this writer sighed: “I spent a lot of time and money buying many things that I don’t need.”

Khoan Khoan said: “I used to stare at expensive products sold in stores with lustful eyes. At that time, if I could afford them, it was a proud act.” However, when leaving the city to live in the countryside, the writer changed his mind completely: “Here, when you look at the clear moon, you will feel that everything you have is a bondage”.

According to the writer, in this life, human needs are moderate, excess can lead to disaster. Only by learning to be content, and maintaining a clear mind, can one experience the purest and simplest beauty of life.

In the house of the famous Japanese novelist and literary translator. Haruki Murakami, the creator of “Norwegian Wood,” doesn’t have a lot of furniture. He also only has a few clothes and cooks simple meals for the day. However, this writer has built his own novel empire.

According to Haruki Murakami, the more you let go of material things, the easier it is for people to be happy, the less burdens they have, the closer they are to the source of happiness.

“Minimalist living does not mean living austerely, away from people, but choosing for yourself what is most quintessential, most necessary to enjoy true happiness,” he said.