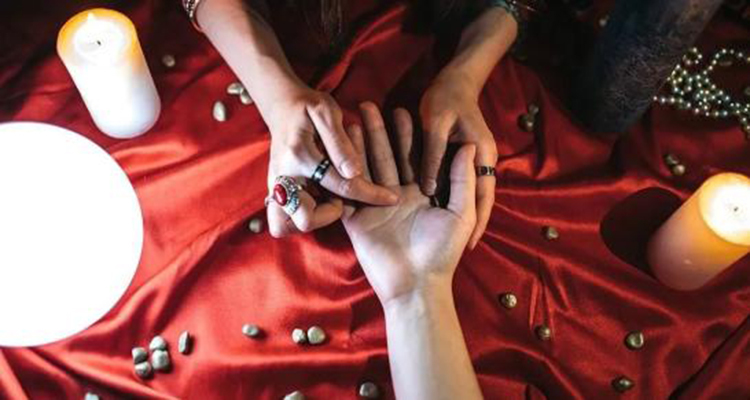 Last year, Ly Thai Hanh, who was preparing for a master’s exam, began to pay attention to Tarot reading as a way to relieve psychological pressure and regain confidence.

Initially free fortune telling on the web. After asking a question, the fortune-teller interprets the hexagrams, each time no more than 10 minutes. What makes the guy happy is that every fortune-telling gives a “master’s pass”. Since then, Ly started researching and buying documents online, learning how to read Tarot cards.

In Ly’s view, divination is like a placebo (the drug has no use, no harm just to encourage the patient’s psychology). “Sometimes when I’m stressed, I turn to card reading for fun, even if it’s not accurate,” said the man from Shanghai.

Living in Beijing, a girl named Xiaoping went to a fortune teller because she was confused between two jobs after graduating from school. One is a job in the countryside, will smoothly become a government employee, the other is an invitation to work in Beijing. Between the two opportunities, Xiaoping is confused and hopes someone can help him. She contacted an online fortune teller on Taobao, who asked customers to choose three numbers from 1 to 10 and then analyze.

“The fortune-teller did not decide to help me, but only analyzed the pros and cons of the two jobs,” said Tieu Binh. After much deliberation, she chose a job in Beijing.

Feng shui, fortune telling, fortune telling… has a long history in China. The China Association of Science and Technology has conducted a survey on unidentified phenomena and found that at least one in four Chinese people believe in divination, and up to 40% of respondents have seen it. fortune telling.

On many divination-related forums in China, most of the participants are young people. The questions they often ask are: Should you break up with your lover? Can I stay and work in the city? What should I do if I want to find the job I want?…

“In general, people who ask questions are worried about their future, expecting someone to give them advice, not only for reference but also to cling to,” said Truong Han, associate professor in the Department of Psychology and Cognitive Science at the University of Science and Technology. Peking University said.

This associate professor believes that fortune telling, whether in person or online, also aims to meet people’s psychological needs. “There’s a concept in psychology called a sense of control, which is to avoid uncertainty. People who read fortune-telling often deal with life pressures, the greater the pressure, the more they believe in fortune-telling results. math,” said Mr. Truong.

Chau Loc Nghieu is a fortune teller of Tarot cards. He and his team once held a training course in Beijing, the tuition fee was 5,800 yuan per person (22 million VND) lasting for three days. After that, open an advanced Tarot teacher training class with a fee of 14,800 yuan (more than 53 million VND). Every class is full of students.

At Chau’s workplace, he receives 7-8 guests every day, sometimes twice as much on weekends. Stable customers can bring him tens of thousands of yuan a month, far exceeding the income of office workers. However, Chau revealed that this income is only average. One of his “masters” can earn 200,000 – 300,000 yuan (700 million-1 billion), per month.

According to Chau’s observation, people who come to Tarot are usually under the age of 30. Women want to consult about love, while men want to talk about career and wealth.

Compared to the traditional tarot shops, online fortune telling is more popular recently, becoming a new form of getting rich. According to Xinhua, on an online consulting platform of “divine fortunetellers” owned by a Beijing company, the “love and marriage” consultation fee ranges from 138 yuan to 498 yuan. The person receiving the most orders is a young “divine fortuneteller” with 3,128 orders since this person became active in 2017.

There are hundreds of companies using “feng shui”, “divination” and “card reading” as their official business form. The top nine fortune-telling websites in this country are invested up to 10 million yuan (36 billion dong). There are fortune telling apps that have up to 14.48 million installs. In this application, in addition to consulting questions and answers about fate, horoscopes also sell feng shui rings, Buddha face necklaces … which according to advertising will bring luck.

Whether it’s divination or horoscopes, according to Ly Dinh – a young man reading Tarot cards – accuracy or not comes from subjective perception. What this girl is sure is that many young people now really have to rely on “luck” to live. For example, what major to choose, when to have a lover, how to get a promotion, to increase your salary, how long to buy a house… are often beyond their control.

“Divination is sometimes a way of avoiding reality. Human nature is to seek joy and avoid suffering,” Ly said. In her view, most young people have trouble in real life, but can’t find a way to solve the problem, have to use divination to release their emotions.

According to researchers, it is undeniable that fortune-telling and feng shui have a certain rationality from a psychological perspective. Like psychological screening tests, people will receive vague and general personality assessments and descriptions. This is also seen as the reason why so many “prophets” or “divine men” in China are trying to get a degree in psychology.

But there are more and more scams behind fortune telling. The so-called “masters” grasp the bewildering and painful psychology of the people who come to the consultation and use unclear words to deceive trust and then make money. Recently, many fortune telling groups on Douban, Taobao or Weibo have been banned.

In this regard, Guo Xiaoming, a lawyer at a law firm in Sichuan, said that using divination to promote superstition, disrupt social order and damage the health of others is illegal. breaking the law. According to Chinese law, this behavior can be detained for 15 days and fined 1,000 yuan, and if suspected of cheating, it will be subject to criminal prosecution.

Vy Trang (According to Cyol, Paper)