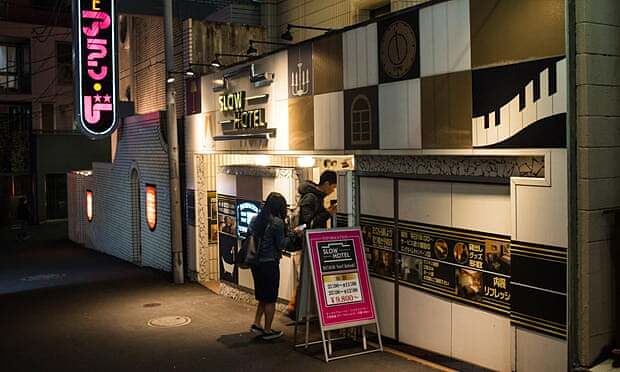 On the 7th floor of a building, the foreign couple is upset because they do not see anyone at the check-in desk. An arm reached through the curtain and touched the credit card on the counter.

The arm quickly retracted and after a moment of hiding, whispering, a receptionist had to appear in the windowless corridor, to give instructions. After a foreign pair, a Japanese couple quietly checked in without meeting the staff. They choose their room theme on the screen automatically.

In recent years, this type of hotel has become an intersection between cultures. Besides domestic tourists, international tourists who also book online without knowing will be in such trouble.

This form of love hotel first appeared in Osaka in the late 1960s, initially catering to couples wanting to escape from the extended family for a few hours of intimate privacy. These hotels ensure absolute confidentiality and eliminate direct contact with staff. Traditionally, guests stay in rooms during their stay and only interact with staff via the screen or phone.

Shishido-san, who runs this kind of hotel in northern Japan, explains that Japanese culture hasn’t been so open yet, so love hotels meet the demand. “Japanese people tend not to be too public about sex. Love hotels are needed as a space to free their libido,” he said.

In the golden age of the 1980s, as many as 30,000 “love hotel” establishments, now there are only about 10,000. The main reason is that Japan’s population is aging, which means fewer young people want to come here. However, an estimated 1.4 million Japanese people visit love hotels every day, and analysts believe the industry generates around 2-3 billion yen per year.

Before the outbreak of the pandemic, “love hotels” attempted to reform to serve foreign guests. This year the global pandemic wiped out international tourism. Japan has closed its borders with most countries and the number of foreign visitors has dropped 99% since April. Surprisingly in the era of social gap, the “love hotel” model is “hot” again. because this is not only a private, private place, it also becomes an ideal place to avoid society. Besides, the model of not interacting with employees is really effective when communication is limited.

A representative of a Tokyo suburban hotel said their facility has seen an increase in demand from young Japanese, who live in enclosed living spaces with poor soundproofing, and living with families. “Our staff saw many signs of customer cars from outside the prefecture, especially Tokyo residents who had sneaked out. Despite social exclusion orders, they silently converged to hotels in one place. local number, “said the person.

A Twitter hashtag titled “Whisper from hotel staff,” often shares strange or nasty things that happen at their workplace. But lately, the shares are lamenting just how busy they are. One wrote: “I am very busy. I really need a break. When will Covid-19 be gone?”.

In translation, the number of customers means the employee’s work also increases. They not only cleaned as usual, but also took a long time to thoroughly sterilize the rooms. According to the J-Cast News, “love hotels” in Kanagawa Prefecture have seen a surge in sales from visitors from Tokyo. Contrary to the tourism industry, hotels go down, “love hotels” should eat out.

Liam, a tourist from London who stayed at an inexpensive love hotel in Osaka in February, said: “Someone told me that booking here is a must when visiting Japan,” he said. to speak. Room features super-sized beds, karaoke machines, jacuzzi, condoms, free cosmetics, sex toy vending machines and mood lighting. “The receptionist seemed surprised when we wanted to speak to an employee,” he said.

At that time, Liam used to find it funny when the staff put food and clothes at the entrance instead of delivering them directly. “I felt silly at the time, but if I go back now, I will feel different,” said the young man.

After months in Britain, Liam became aware of the need to protect herself from the virus, as well as to protect those around her. “No contact is a good thing in an age of epidemic. Instead of turning love hotels into a traditional basis, it is possible that the pandemic will change the direction of tourism and the ordinary hotels will have to change. to be like the love hotel, “he said.

Bao Nhien (According to the Atlasobscura / Asiatimes)