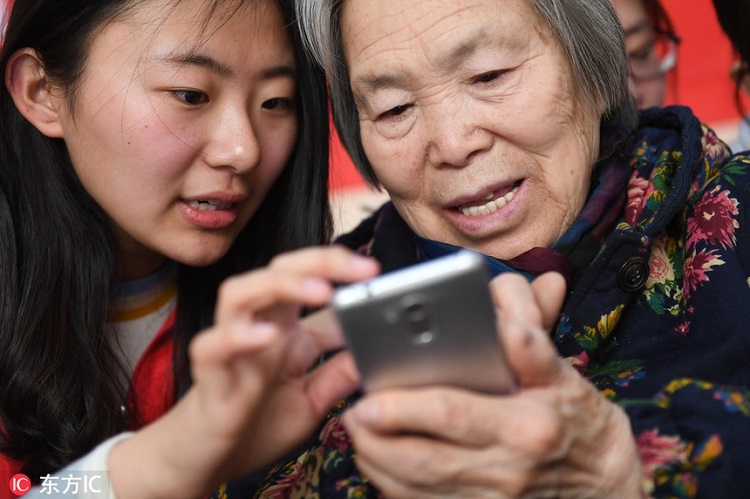 Entering a virtual world, not only young people, but also the elderly can be “addicted”. Especially as the older they get, the more free time they have.

In 2019, Mr. Nguyen Cong Thanh, in Dak Lak, deducted 4 million VND from the sale of coffee to buy a smartphone after a trip with a group of high school classmates. His daughter downloaded a social networking application and registered an account for him. “I make friends with many people, of all ages. There are people who have not seen them since the buffalo shepherding period for several decades, now also meet again,” the 58-year-old man boasted.

Since then, Thanh’s life has changed dramatically. He is more interested in looks and especially likes to take pictures. “My children and grandchildren post everything, he likes and comments. He can see pictures of his nephew in Japan, how happy is his life. Remember, he called a video to talk, no need to ask over one, that other child. “Thanh Giang, 30 years old, daughter of Mr. Thanh, said.

Once, at night, he suddenly sat up and showed his family: “Hoai Linh talk to the three of them flying!”. It turns out that he follows a series of singers and actors that he loves, previously only met on TV, sometimes they post pictures, share, he also comments, gets responded. Thanks to the social network, he was able to exchange and exchange with people with similar interests. He passionately talked to the bonsai growers association about how to pose and then “jumped” to the hobbyist club to “discuss” how to balance the pH of the water in the aquarium …

According to a survey and research by Pennsylvania State University (USA), people between the ages of 60 and 86, have a habit of using social networks like young people, mainly to bond with old friends and grow. Relationship with like-minded people. They also love to follow loved ones. Mr. Thanh and many old Vietnamese also find joy thanks to such social networks.

According to the organization’s statistics We are social, In 2019, in Vietnam, the group of social network users with the fastest growth rate is over 45 years old. This group increased to 60% in the past year. But also according to the report Vietnam online advertising 2019 (Vietnam Digital Advertising 2019), the average Vietnamese spends about 6 hours and 42 minutes to access the Internet.

Family members do not enumerate whether Thanh spent that time on social networks or not, but his passion for “virtual world” also made his children and grandchildren a lot of headache.

Mr. Thanh is no longer excited to carry his young child out and take his older child to school as before. Sitting with the guest, he also opened the phone to see. Every day, account holder Nguyen Cong Thanh posts at least 5-6 posts, from the “selfie” photo in front of the coffee field, showing off a bunch of newly-blooming flowers in front of the house … and the family’s chicken coop is also fine. bounce. “Many days I cried right next to him but he did not know because he was still thinking about what to post for many interested people,” said Thanh’s daughter.

One afternoon, Mr. Thanh saw a photo of five siblings posted by his oldest brother. However, only the other three were tagged with a name, not for himself. Thinking that I was looked down on by my brothers and sisters because they were cadres and I was far from my hometown and had little education, Mr. Thanh was angry. Under the photo, he commented: “Is this Thanh dead?”. After that, the brothers and sisters called him no matter what he did not answer.

“Your eldest uncle despised me, did not consider me a sister, so I did not attach my name. From now on, it is considered as no relatives and brothers to help lose your face”, Thanh Giang smiled back. It turned out that Mr. Thanh was a new user, so Facebook did not recognize it to automatically attach the name like the two brothers had used for many years. The oldest brother is also new to playing, so he does not know how to attach the name. After being explained, Mr. Thanh understood and he accepted to make up.

For a few days, seeing people posting photos at meetings and seminars, Mr. Thanh thought they wanted to “show off their status” to him. Family members called to talk, he was no longer interested, but as before or did not answer. “The plan to return home before the Lunar New Year, which has” closed “, has now been abandoned. real.

Sometimes I see “half crying, half laughing” because parents use social networks, but the thing that makes Phuong Thu, the daughter of Mrs. Hoang Hong Ha, in Phu Tho, most worried, is that her mother was tricked and accidentally helped. for fake news.

Since becoming a social network user, Ms. Hong Ha suddenly becomes a “addict” to shopping and likes to watch livestream sales videos. From bonsai, clothes, skirts to shoes, she buys it through a few “clicks” on her phone. Quality is very “unlucky”.

Recently, just in the morning, Phuong Thu saw her mother’s eyes puffy from crying. She ordered more than 10 lilies and transferred 100,000 VND of the deposit but did not see the shipment. Many times she was deceived, so Ms. Ha sent a message to urge the shop owner. Unexpectedly, she was cursed by the shop owner with vulgar words. “Mom is angry so stay up all night cursing at each other,” Mrs. Hong Ha warmly felt as she lost money and brought her frustration into her body.

Earlier this year, she and many friends became sources of sharing the article “eat hard boiled eggs at midnight to Covid-19’s room”. Not only sharing, Mrs. Hong Ha also called her children and grandchildren everywhere to urge to eat preventive eggs. As a result, that night, Ms. Phuong Thu lost sleep because she was constantly on the phone because people called to ask, “Is my mother okay, but she calls and talks like that”.

“The elderly are addicted to the phone mainly due to biological, psychological and social reasons. The abuse of social media can be a sign of loneliness.”, psychologist Yap Chee Khong (Malaysia) commented.

Phuong Thu finds this somewhat true for her mother. She is used to living in the countryside, but because she has to help her take care of her grandchildren, she comes to Hanoi to live. Every day, only the old woman with her child can talk at home, social media becomes a bridge to the outside world. “Sometimes I blame her, but I also have to look back because maybe I am a child but I am too indifferent to her psychological life,” she said.

Thanh Giang in Dak Lak also admits she “left her parents behind”. “Sometimes, the children’s stories, the grandchildren talk about at the tray of rice, the grandparents can not understand. But since he went online, he became younger, he could talk with any kind of conversation”, the daughter shared.

Media expert Le Quoc Vinh, Chairman of LeBros Media Group, said that the old or the young are susceptible to social media addiction. However, the elderly have more free time, so they spend more time using them. In particular, the elderly are often emotional, prejudiced, so it is easy to become the target of fraudsters on social networks. “Many people I know easily share untested information, put money to join groups and associations without knowing being cheated,” said Mr. Vinh.

According to Mr. Vinh, in order to pull the elderly out of social networks, children and grandchildren should spend more time with them, for example organizing activities to connect family members, registering parents to participate. Club … At the same time, children and grandchildren should proactively share information, orientate and warn grandparents, parents, avoid being cheated, post untested information.

“In China, there are thousands of service centers that teach the elderly how to use smartphones. In which, there are instructions on how to avoid addiction, how to avoid online fraud, how to make friends”, Mr. Vinh said.