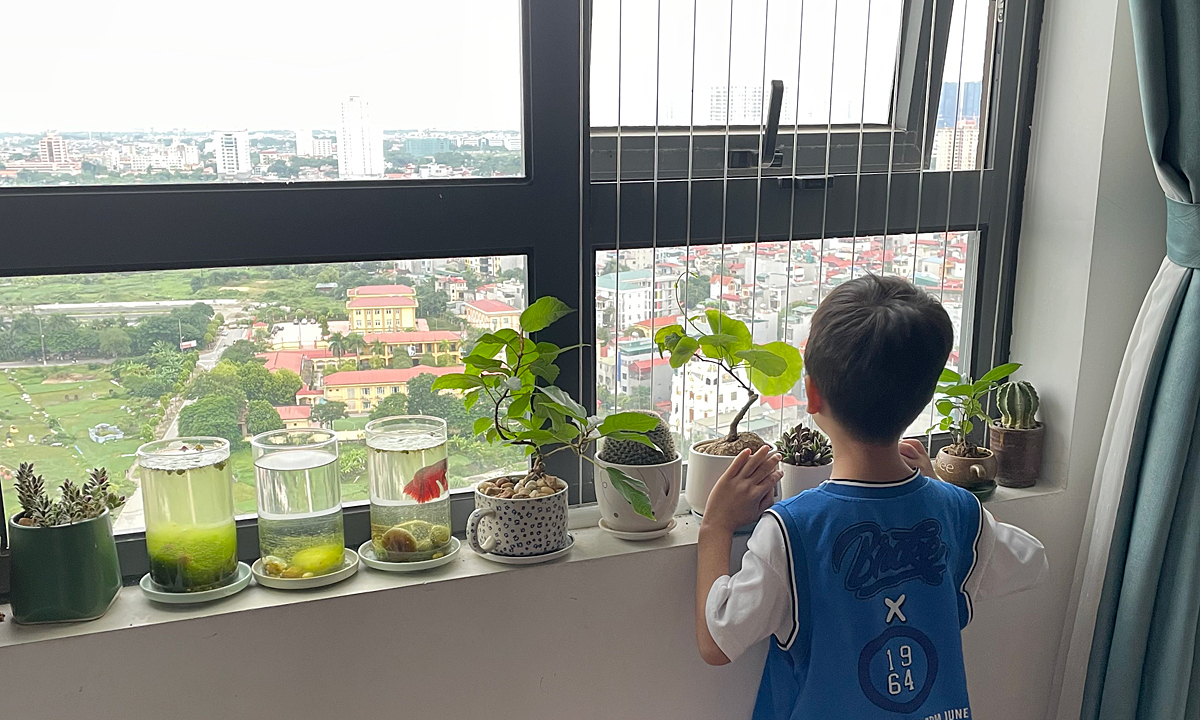 Two girls were evicted from their home in the midst of the city’s distance, a boy was scolded at 2am, and many other children were beaten when their parents were angry and needed to “discharge”.

In the last three months, the National Child Protection Switchboard, 111, recorded a record increase of 48,200 calls in July, 50,800 in August and 46,800 in September, nearly double normal. The content of the calls revolved around the topic of health care, psychological support, mental health support for children and more Covid-19 policy consultation calls.

“Especially in the parent-child relationship, we have recorded an increase in complaints about parents yelling, beating and controlling their children,” said Ms. Le Thi Thao, deputy head of Call Center 111. .

Reports from countries affected by Covid-19 of the United Nations Children’s Fund (UNICEF) recently also showed that the situation of travel restrictions, social distancing and other disease prevention measures. coupled with increased economic pressure on families leads to increased violence, especially against women and girls. In many countries around the world, domestic violence increases from 30% to 300%.

More than a month ago, at 2 a.m., switchboard 111 received a call from a resident in Dong Anh, Hanoi, informing that a neighbor’s family was abusing a child in grade 3, crying for a long time. Switchboard operator Pham Viet Hong was on duty and immediately connected with the regional police to arrive at the scene. After about 40 minutes, the police announced that “the house is quiet, the electricity has been turned off to sleep”.

The next day, Ms. Hong contacted the staff at the ward and the delegation to work with the family. Parents explained that due to distance, they did not make money and stayed at home, so the husband and wife were in conflict, and when they checked their homework, they found that they were negligent, so they scolded. “They said they only threatened, not hit, I was afraid so I cried,” said Ms. Hong. This parent has made a commitment not to repeat the offense, and at the same time, the commune and ward staff continue to monitor the case.

Also because of the frustration during the epidemic, a mother in Thanh Xuan district kicked her two children, 9 and 6 years old, out of the house. “The two children walked out to the quarantine checkpoint at the beginning of the alley and were not allowed to continue, so they returned. The mother continued to chase them. This time, the child borrowed the phone of the quarantine officer to call his father,” said Viet Hong operator. .

Their parents divorced a few years ago and are now both married. Receiving a phone call from his daughter, the father, who lives in Da Nang, called the switchboard for help.

When the delegation of local officials came to work, the mother said that her sister and uncle still took good care of the children. What happened was just “speech in anger”. However, the children’s father objected and gave evidence. Finally, the mother admitted that she was angry that day and sent the two children away. She also shared that the pressure to take care of a new baby made her neglect to care for her two older children and was more frustrated because she did not receive child support from the father of two children.

Families are normally a safe haven to protect children, but when schools close, some homes become places of abuse. Many children are not only subjected to verbal violence but also beatings.

Recently, the switchboard received a call for help from the uncle of a little girl in Thanh Hoa. 5th grade girl, being carried by two uncles. My mother left after being abused by her father many times. The father lost his job and drowned in alcohol, no one to vent his anger, so he often took it out on his son. “The child who was studying next to my house was suddenly approached by his father and slapped him in the face and head,” said the uncle.

The complexity of the 4th epidemic has pushed unemployment to the highest level in nearly 2 years of the Covid-19 outbreak, affecting millions of Vietnamese families. Out of more than 69,000 employees, VnExpress In a survey with Committee IV in August, up to 50% of people could only afford to live for a month.

“The economic disaster of the pandemic directly causes stress levels for parents, and the ultimate bearer is the children,” Thao said.

Psychologist Hong Huong, Permanent Resident Library of the Vietnam Association for the Protection of Children’s Rights, said that The real cause of child abuse is that adults have never seriously learned to manage “mental garbage”. The pandemic is like a fertile ground for parents to “litter” and the bad thing is that no one guides them, trains them to discharge properly, so they will instinctively survive on the vulnerable. than.

“There is nothing safer than littering children, especially young children. They do not know how to resist, they are completely defeated,” the psychologist analyzed and found that in most cases, after venting. After all “junk” on their children, parents feel regret and want to make up for their children, but then everything happens again.

During the epidemic, psychologist Kim Thanh (Hanoi) also received many calls from parents and children. “One day I received three calls from three mothers sobbing, saying that they were too tired and helpless because their children were disobedient and just wanted to die,” the psychologist said.

According to Mrs. Thanh, if in a good mood, it is not to the extent that the mother has to “seek death”. But in the context of the epidemic, such a small thing as a child disobeying as well as adding fuel to the fire, causing negative emotions to flare up, just want to beat the child and even destroy himself.

“In case of anger flare up, parents need to immediately go get a glass of water to drink to cool down, take a deep breath to regulate the air in their body and switch to doing other things they like to redirect their thoughts. Teach your children to be calm,” advises Mrs. Thanh.

According to psychologist Hong Huong, in order to minimize the situation of “dumping garbage” on children, from the community it is necessary to strengthen propaganda and educate parents in skills to properly care and protect children.

From the parent’s side, having decided to have a child, in addition to physical nourishment, they are aware of mental health issues for their children. Childhood mental trauma can cause distortions in thinking and lifestyle as an adult and to heal takes a long time, there are injuries that cannot be healed.

Parents should support their children in developing ways to show loving actions. “Once a child has an active lifestyle and knows how to show love, parents can’t get angry even at their child’s cute actions,” the expert said.

Parents should practice emotional management according to the 25/60 principle, that is, every 25 minutes, take a “quiet minute” to return to yourself to see what actions you are doing; Every 60 minutes, spend a “quiet minute” asking how you’re feeling. If you’re upset, angry… then that’s a sign that you need to rest immediately. Find ways to release emotions so as not to negatively affect others.

“This method is 90% effective and sustainable not only in dealing with children but also in other relationships, but it needs serious practice,” psychologist Hong Huong advised.