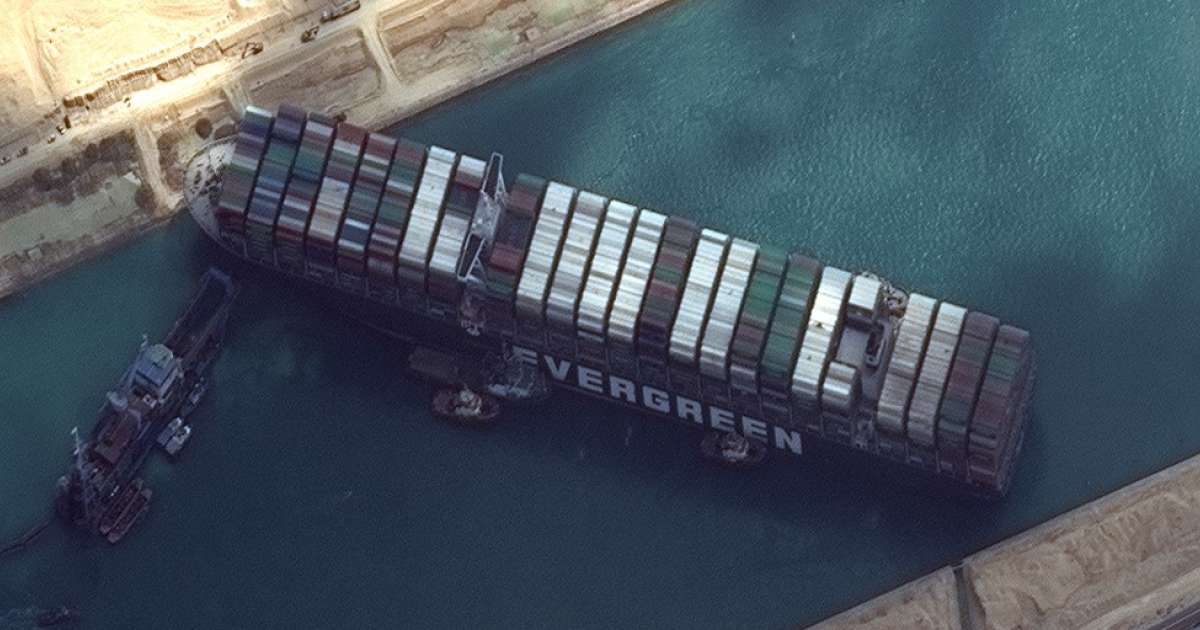 A giant container ship, the Ever Given, found itself across the Suez Canal in a sandstorm on Tuesday, and is obstructing from one of the world’s busiest waterways.

How did this happen?

The 400-meter-long, over 220,000-ton vessel deviated from its course on Tuesday. The Ever Given, 59 meters wide and about sixty high with its cargo, then got in the way in the south of the canal, near the city of Suez, blocking all navigation between the Mediterranean and the Red Sea.

While high winds combined with a sandstorm were first blamed for the incident, weather conditions were not the only reason for the grounding, the head of the Authority said on Saturday. Suez Canal (SCA), Admiral Ossama Rabie.

“Other errors, human or technical, could also come into play”, he said at a press conference in Suez.

According to Bernhard Schulte Shipmanagement (BSM), the Singapore-based company responsible for the technical management of the vessel, the 25 crew members are safe and sound. And there was no pollution or damage to the cargo with a capacity of over 20,000 boxes (TEU or TEU).

What are the consequences ?

The canal sees pass, according to experts, nearly 10% of international maritime trade. Nearly 19,000 ships used the canal in 2020, according to SCA. Inaugurated in 1869, the canal has since undergone several phases of expansion and modernization. Its breakthrough has drastically reduced the distances between Asia and Europe: 6,000 km less between Singapore and Rotterdam for example.

The canal has been blocked in the past, especially during the Suez Crisis in 1956 when ships were sunk by Egyptian authorities. More than 300 boats – including freighters carrying live cattle – were stuck at both ends of the canal on Saturday evening, Rabie said.

Slow shipping, oil prices… what is the impact of blocking the Suez Canal?

The blockage causes significant delays in deliveries of oil and other products, with a knock-on effect on the price of black gold, which rose on Friday.

The first concrete effects are being felt: Syria in particular indicated on Saturday that it had started to ration the distribution of fuels, faced with the delay in delivering a cargo. For its part, the SCA stressed that Egypt was losing between 12 and 14 million dollars (10 to 11.8 million euros) per day of closure, while the specialist magazine Lloyd’s list estimates that the container ship is blocking every day the equivalent of around 8.1 billion euros of goods.

According to a report by insurer Allianz, each day of blocking could “Cost between six and 10 billion dollars to world trade”.

In order to mitigate the losses, shipping giant Maersk and Germany’s Hapag-Lloyd have indicated that they are considering rerouting their ships to pass through the Cape of Good Hope, a 9,000-kilometer detour around the African continent.

The SCA announced on Thursday that maritime traffic was “Temporarily suspended”, the company appointed for the “Rescue” of the ship evoking “Days or even weeks” before its recovery.

A bailout on Friday failed. However, Mr. Rabie claimed on Saturday that the ship had “Moved 30 degrees to the right and left” for the first time, a “Good indicator” the progress of the efforts to clear the vessel.

Container ship stuck in Suez Canal could be cleared next week

“We can finish today or tomorrow, depending on the reaction of the ship to the tides”Mr. Rabie also added on Saturday.

A high tide forecast for Sunday evening with a large coefficient could help unblock the ship.