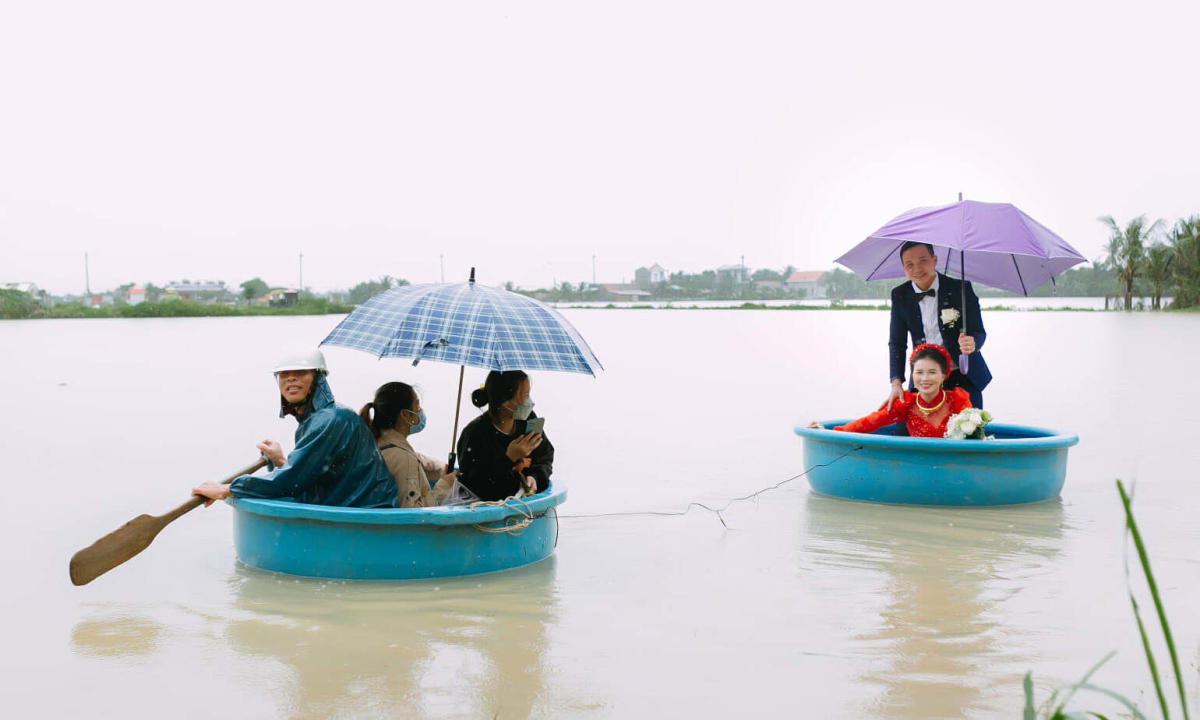 Heavy rain, high flood water, some areas flooded deeply, causing many weddings in Binh Dinh to break plans, having to switch to receive brides by boat.

At 5:00 am on November 15, Le Thanh Su, 31 years old, living in Canh Vinh commune, Van Canh district put on a suit with his parents and a team of young people carrying the casket in two cars to pick up the bride. More than 30 km away, the bride Tran My Linh stood anxiously waiting for her groom’s family when the main road from the highway to the house was flooded with flood water.

After an hour and a half of traveling, about a kilometer from the girl’s house, Le Thanh Su’s bride-to-be was forced to stop. Initially, Mr. Su calculated that if the flood was not too deep, he would take a car to “cross the river”. But the road ahead was covered with water, the path could not be determined. The groom’s family had to visit the surrounding households to borrow two boats to row to the girl’s house.

At 9:30 a.m., the bride My Linh got on the boat to return to her husband’s house. “Since I was a child, I have never seen a wedding in the delta where I had to go by boat to pick up the bride,” said Le Dau, the groom’s younger brother.

Although the weather was not favorable, Su and Linh felt happy and excited. “Welcome the bride in the extreme flood season, but it doesn’t affect the happy day when I can bring my wife home,” the groom said.

Since November 8, due to the influence of cold air combined with high-altitude easterly wind disturbances, heavy rain has occurred in many central provinces. During the two days of November 14-15, the rainfall in many localities of Binh Dinh was up to 315-350 mm. Rivers in Quang Ngai and Binh Dinh flooded at alarm 2-3, on alarm 3, many areas were heavily flooded. Heavy rain is forecast to continue until the end of November 18.

Nearly 10 hours before the wedding reception, the dyke near the groom’s house Dinh Trung Nhat, 24 years old, in Phu My district broke, causing many households to drown in flood water. Heavy rain, strong wind, water flooded to the door, but the wedding day was fixed, the groom’s family had to borrow two basket boats to take the bride-to-be to the car to pick up the bride. “The road is short, but it’s flooded with thighs, if you don’t go by boat, you’ll get wet,” the groom said.

30 minutes later, 12 members of Trung Nhat’s family showed up at the girl’s house and completed the formalities. At more than 2:00 pm, when the procession reached the alley, the young couple in a basket boat were connected to a rowing boat to pull back. While covering the umbrella, the groom occasionally reminded his wife to hold on to her hand to avoid falling.

“It was only flooded in the morning, but heavy rain for a long time made the flooding situation worse,” said Vo Thanh Luong, who took photos for the couple.

As a service worker, he is no stranger to weddings by boat or basket boat every time in the flood season, but every time he goes to work, it is an unforgettable memory. While taking photos, arranging the formation and struggling to move in the country, the male photographer faced many difficulties. “Extremely extreme but I don’t mind to capture memorable moments for the bride and groom,” he said.

Dinh Trung Nhat and Le Thi Diem My have been in love for nine years. Their wedding, scheduled to take place in February, was postponed because of the epidemic. As soon as the distance orders are eased, the two families close the engagement ceremony and get married on November 15.

All night 14, the bride, groom and families on both sides could not sleep. Partly because of emotional recovery, the rest was worried about heavy rain, high water could not receive the bride. “Despite the difficulties, fortunately everything went smoothly on our happy day,” Trung Nhat said.

As for Diem My, she said that getting married on a high flood day is an unforgettable memory when having a special wedding. All family members work hard but everyone is happy.

After receiving the bride, the groom’s family made 5 trays of rice to invite his relatives to have a meal due to the regulations restricting the gathering of people, although the yard for making the water bowl was still up to the calf.