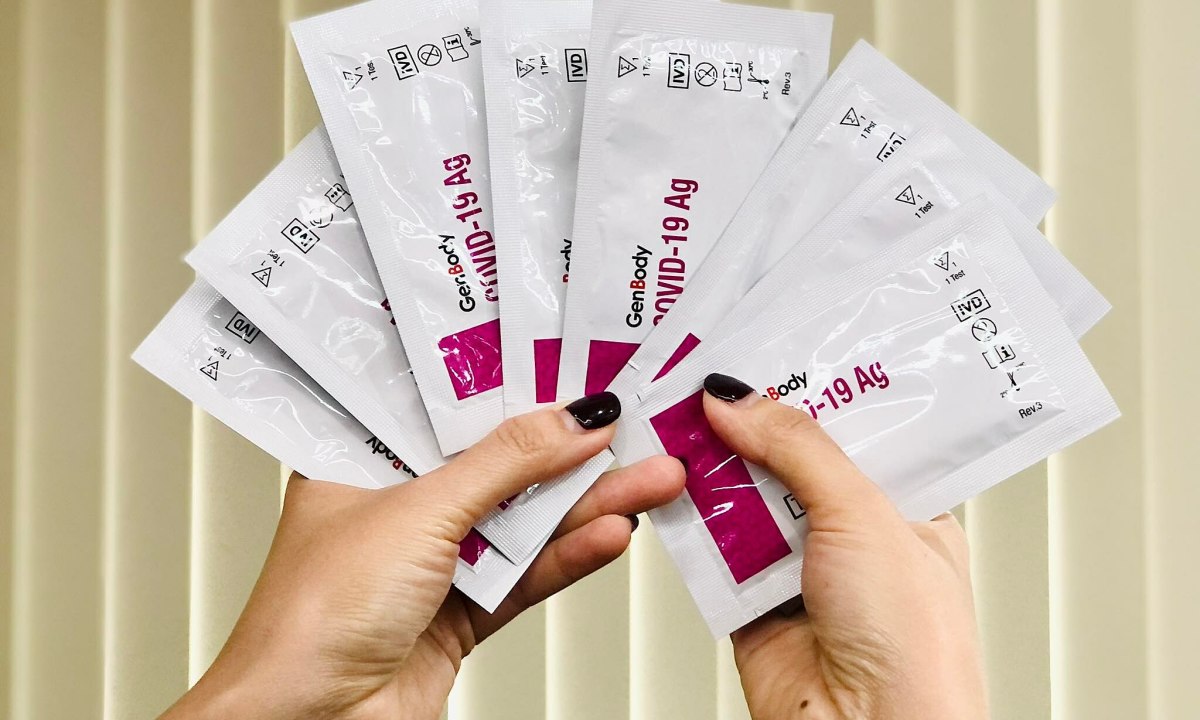 HanoiOver the past month, Ms. Nhan has spent nearly 10 million VND to buy a quick test kit for the couple to test themselves before coming home from the company every day.

“During evening, at my house, there will be a scene where the mother-in-law stops at the door and asks ‘where is the test?’. Seeing two sticks, one line, she lets her husband and her husband in,” said Nhan, 34 years old, from Ha Dong district. shall.

Unlike some people who have the mentality of “everyone becomes F0”, her family still follows the same strict defense regime as before the vaccination. Her mother has many underlying diseases, even though she has received 3 injections, her two young children have not been vaccinated, in which the eldest is obese, afraid of contracting Covid-19 and prone to severe complications, so the whole family cannot be subjective.

Nhan works at a media company with more than 150 employees with an open office, every few days the agency records a positive case. Her husband works as a market manager, every day he comes in contact with countless people. Therefore, regardless of whether it’s raining, windy or cold below 10 degrees like the past few days, the couple still have to stay in the parking lot for half an hour to test each other for Covid-19 before going home.

Before Tet, Nhan’s husband tests every day, and she once every two days. Since Tet until now, they almost have to test every day because of the situation “F0 outnumbers F1”. “How much money can you make to pour into the test kit, every time you buy a kit is a pain in your wallet,” Nhan lamented.

The price of each quick test kit (sticks) she bought ranges from 55,000 VND to 95,000 VND. In total, over the past month, Nhan has bought 30 boxes of 5 sticks each, with an estimated cost of nearly ten million dong.

Over the past month, Hanoi has regularly led the country in the number of new daily Covid-19 infections, as on the evening of February 22, it continued to set a new record with 6,860 cases, bringing the capital’s total number of infected people to over 210,000. shift. According to the Ministry of Health, as of February 17, Hanoi has nearly 149,000 patients being treated at home, accounting for 96.58% of the total number of Covid-19 cases being treated.

According to Director of Hanoi Department of Health Tran Thi Nhi Ha, the high number of infections was expected when the city reopened all production and business activities as well as culture, festivals and entertainment. “The number of infections is not really accurate and doesn’t make much sense at the moment,” she said, adding that the rate of patients who have turned seriously in the capital is now “within a safe threshold”.

But for Hanoians, the “safe threshold” is still not to get infected with the virus, if the infection is detected early to prevent transmission to young children and the elderly in the house.

In addition to protecting themselves and their families with a quick test, families in the capital are also gathering together to stock up on medicines and necessary equipment to be ready for the treatment process at home. In more than 20 families that the reporter VnExpress Survey on February 21-22, most said that they have ready-made quick test strips at home, fever reducers, oresol, essential oil lamps, locusts and food. Some homes even prepare SpO2 oxygen meter, Chloramine B for disinfection and some Covid-19 drugs. Among these, rapid test strips are the most preferred and must be replenished frequently.

“I have a pregnant wife at home, so I take a sample myself every two days and thoroughly wear a mask, sleep separately from my wife and children since Tet until now,” said Chi Quan, 28 years old, in Bac Tu Liem district. shall.

Last week, Mr. Quan had contact with 7 cases of F0. “The day the neighbor held a karaoke party to celebrate his son’s birthday, the next day his son tested positive and when he moved things with his colleagues in the morning, in the afternoon they went up two lines,” Quan said.

Initially, he only bought a few sticks at the drugstore, but the complicated epidemic situation ordered two dozen sticks, because it was determined “before and after”. “The money to buy test strips in the past two weeks alone has consumed 1/6 of my salary,” said Quan, who works in the armed forces.

Since Hanoi students returned to school on February 8, the amount of money spent on test kits accounted for a significant part of the family’s expenditure of Phuong Mai, Cau Giay district. She has two children in grades 7 and 11, almost every day they come home from school, they also report that their classmates are positive. Ms. Mai and her husband’s agency are also in a state of “jumping F0” continuously. Therefore, the family tests every 2 days.

“Although the whole family has been vaccinated, friends also say that if the infection is very mild, no one can predict the post-Covid-19 sequelae,” Mai said. Before, her family used 4 sets each time, losing millions of dollars per week. This week, I saw a collection of sampling sticks for sale, so I bought them to save costs.

Xuan Canh’s house in Hoang Mai district with 6 members also bought 30 sets for 2.1 million VND with the intention of gradually using them. But since he was suspected of being positive on February 12, the family has used up all of this number. Today he ordered again, but the price has increased by twenty thousand a stick compared to before.

Faced with the rapidly increasing number of infections across the country, there is an increase in the price of test kits, and there is a shortage of goods in many places. Surveying a number of pharmacies in Bac Tu Liem and Cau Giay districts, sellers all said that the price of the kit increased daily.

Ms. Hong Anh, an online seller in Thanh Xuan district, said that just last weekend, she also collected a test kit of French technology, made in China for 45,000 VND a stick, sold to acquaintances 50,000 VND. However, at present, the same product, the price has doubled. “Acquaintances ask all day, order 5-10 boxes at the same time, but the price is too high to buy and sell,” she said.

Thao Linh, an online seller in Ha Dong district, said that in recent days, she often heard customers complain of “wallet pain” because of spending on test kits. Having a family of 9 members, testing twice a week, having to spend up to 1.5 million VND for test strips.

For almost a week now, she has been selling the product of quick test strips with a combined sample, for 89,000 VND a box of 50 strips. Families only need to buy a test kit and use this extra stick, which costs less than 100,000 VND each time. “When there was news that elementary school students in the inner city were returning to school, I sold very well, getting at least 1,000 sticks a day,” she said.

According to Linh, the way to use a sample collection stick is an economic problem being applied by many agencies and organizations, even her own. When selling to customers, Linh encloses an instructional video of the doctor of the Central Institute of Hygiene and Epidemiology.

As for Nhan and her husband, due to continuous testing, she had a sore nose, a few days ago she had to change from picking her nose to taking saliva. However, this method was not very effective, so in the next few days, Nhan returned to collect oropharyngeal fluid. It’s been cold for a few days now, she and her husband have a cough, her mother is not reassured that she even goes to the hospital to do PCR.

“Now F0 is everywhere, many infected people have no symptoms or do not report it, so it is better to lose money in exchange for safety”, Nhan waved his hand when he was advised to “only test if there are suspicious and weak symptoms”. clear epidemiological factors” to reduce costs.

Watch more carefully the quick test technique video according to the instructions of CDC Hanoi: 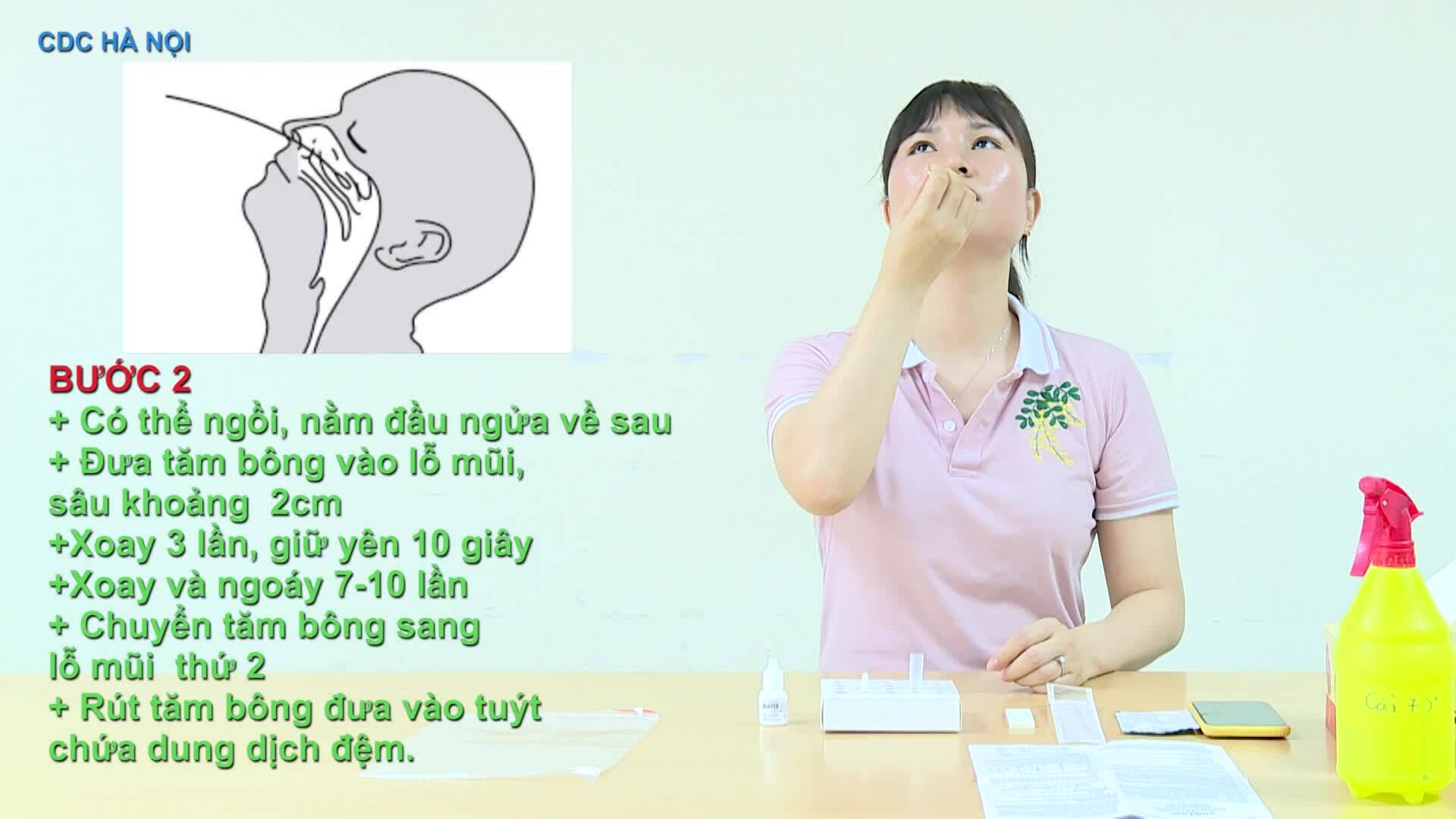