(Sports news, volleyball news) The leader of the VTV Binh Dien Long An women’s volleyball team shared details about the team’s situation as well as the possibility of quitting the national tournament after detecting many athletes infected with Covid- 19.

When the National Volleyball Championship 2021 was just over a week away from kicking off, the Vietnamese volleyball village received the “lightning strike” news with the number 1 candidate for the championship being the VTV Binh Dien Long An team at risk of having to quit the prize.

Specifically, during the medical examination before leaving for the tournament, this Western women’s volleyball team discovered that up to 8 key members were positive for Covid-19, including 1 coach and 7 athletes who were on the team. 1. This caused the army of coach Luong Nguyen Ngoc Hien to be seriously short of numbers and almost unable to complete the medical isolation on time to attend the tournament.

If the VTV Binh Dien Long An women’s football team is absent, it will be a great regret for the national championship because this team has been continuously crowned in cup tournaments since the beginning of this year. In addition, fans are eagerly waiting for the re-appearance of famous wife Nguyen Thi Ngoc Hoa, who previously announced her retirement but agreed to return to play to help her hometown team. Thanh Thuy went to Japan to compete.

All members of the Western women’s volleyball team have been isolated and tested for Covid every day. Even the men’s team is at risk of dropping out if any infections are detected

However, recently, the leader of VTV Binh Dien Long An continued to report shocking news when affirming that there is a very high possibility that not only the women’s team will drop out, but also the men’s volleyball team of this unit may not attend.

“It is almost certain that our women’s volleyball team will not be able to participate in the tournament. Because the team competed with 12 athletes, all 7 were infected with Covid. The remaining 5 names are also at very high risk of infection. Not to mention the prize is less than 10 days, so it is impossible to complete the medical isolation from 14-21 days according to regulations.

We have now isolated the entire team, are conducting thorough testing of all athletes daily, including the men’s volleyball team. If more cases are detected, our men’s team may also have to drop the national championship here,” said Nguyen Trinh Anh Phuc, head of the VTV Binh Dien Long An delegation. Mr. Phuc shared that over the past time, the place where the team is stationed is the Athlete Training Center of Long An province, there have been some positive cases in other subjects, but the volleyball team still received good results in previous tests. this. The fact that up to 8 members tested positive in the recent test is extremely “shocking” news for the team leader.

“We have booked air tickets, completed all procedures and are just waiting for the day to go to the competition. Really, this news is too shocking for us when all the team members are determined to win the championship with very good performance from the beginning of this year. Not to mention we have just successfully persuaded assistant Ngoc Hoa to re-export,” said Mr. Phuc.

According to the tournament rules, any team that does not participate in the national championship will have to be relegated and relegated to the A league next year. Sharing his opinion on this, Mr. Anh Phuc affirmed: “The fact that the team has to quit the tournament because of Covid is a force majeure event, and there is no precedent. We are working on dispatch to report the situation of the team to leaders, localities as well as federation and tournament organizers.

The most important thing for us right now is the prevention and control of the spread of the virus, and the health and safety of athletes. We have given the athletes infected with Covid a special treatment so that they do not have respiratory and lung sequelae that affect their future and career,” said Head of VTV Binh Dien Long An. 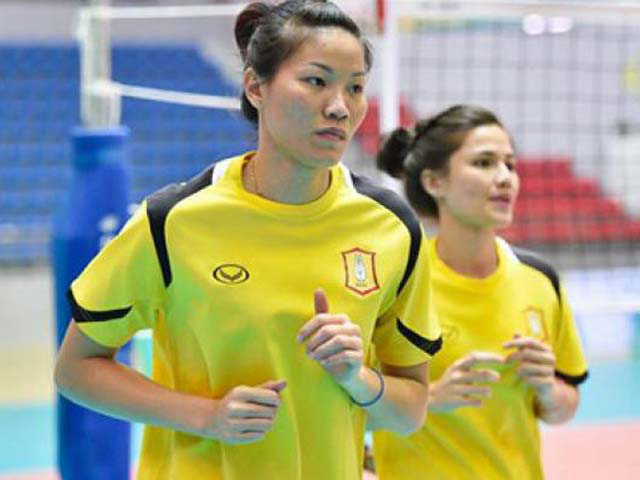